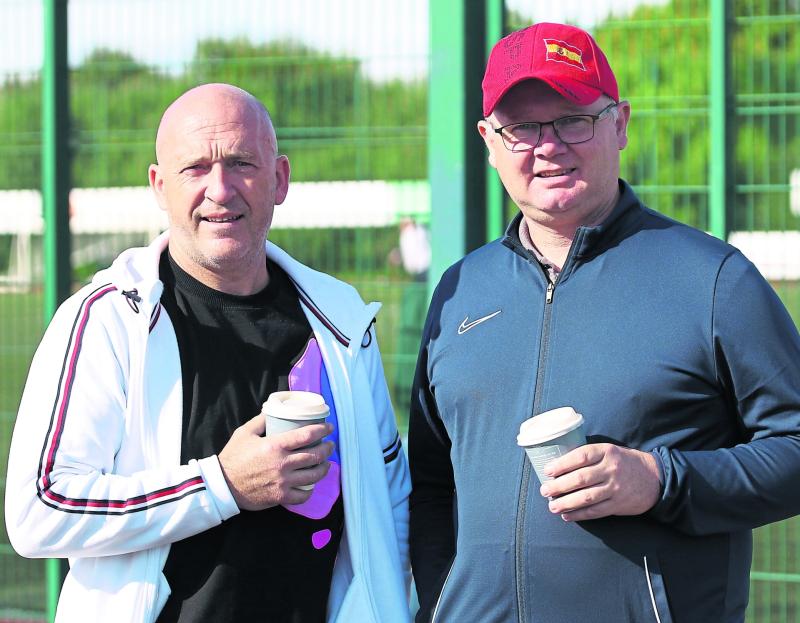 Limerick District League - Sunday's Lower League Round-Up
In the Premier A League, a four goal blast from Mike Curran helped to propel Aisling Annacotty B into second place with a 5-2 win over Kilmallock for whom Jack McGuire and Mark Hayes were on the mark.

Newport and Hyde Rgs are just a point further back following wins over Cappamore and Fairview Rgs B receptively.
Jay Ryan 2, Dan Egan 2, Eoin Looney and two own goals accounted for Newport while an Evan Shine penalty was enough to see Hyde through in the Fairgreen.

In Division 1A Holycross hit  Southend for five through Noah Patterson 3, Dara Glynn and David Brown.
Rob McLoughlin, Eamon O'Mahoney and Danny Frewen scored for Ballylanders in a 3-0 win at Kilfrush while Pallas with scores from Vinnie Ryan 3 and David Ryan proved too strong for Castle Rvs.

In Division 1B, Janesboro recorded their second win a 4-2 result against Glenview.  Denis Brophy (2), Alex Mason and Dylan Robinson scored for the winners; Sean Keane and Barry Butler replied.

In Division 2A, Nenagh moved into second spot with an impressive 3-0 win at Charleville. Cillian Scully scored a brace for the winners with Casey Finn also finding the target.

Evan Walsh and Cian Duffy were on the mark for Murroe B but they fell to Meanus through scores from Patsy Punch, Anthony Punch, Sean Daly and Billy Hogan.

Croom Utd opened up a four-point gap at the top of Division 2B thanks to a 3-0 win over Coonagh. Ethan Barry, Dylan Murphy and Josh Shinnors scored.

Ger Nash and Adam O'Neill scored for Hyde in a 2-0 win over Abbey and Dromore beat Shelbourne B 4-1. John Frawley scored for the home side, Coyle Hussy (2), Ray Massey and Joe O'Callaghan netted for Celtic.

Barry Quinn, Dean O'Brien and John Mitchell were on target for Division 3A leaders Balla B who beat Knockainey B 3-1, Liam Enright replied.

Dean Ryan and Eric Sheehan scored for Lisnagry B but they fell to Brazuca while a Graham Power double saw Newtown past Northside.

Barry Danaher claimed four goals in Mungret’s 7-1 win over Parkville. A Danny Galvin double and Andy Angle made up the tally.

In Division 3B Geraldines B are top following a 4-1 win over Nenagh C. Shane Waters (2), David Considine and Paul Campbell scored the winning goals.

Herbertstown B beat Corbally Utd C 3-2 with scores from David Storan (2) and Ciaran Mallory while Fawzi Ghorab and Lee Madigan netted Prospect goals in a 2-0 win at Moyross.

Fairview Rgs take over top spot in Youth Division One following a 5-0 win over Pallasgreen. Jake Leamy scored three, Matthew Tepou and Calum Murphy claimed one apiece. Nathan O'Shea was on the mark again for Janesboro in a 1-1 draw with Mungret Reg.

Kilfrush are level with the Tipperary lads after a 6-2 win over Granville Rgs.

James O'Sullivan scored three for the winners. Josh Hartnett, Mike O'Keeffe and Josh Sheedy also obliged.
In the Under 17 Division One, Fairview just edged out arch rivals Pike Rvs by the odd goal in five. Josh Mullaney and Aaron Cusack scored for the Hoops; Patrick Dimowski, Cameron O'Grady and Ben O'Mahoney won it for Fairview.

Nenagh AFC and Regional Utd played out a 2-2 draw. Dan Zamotsnyy and Joey McLoughlin netted for the Tipperary side.

In Division 2, Corbally beat Herbertstown 4-1 to join them at the top of the table. DJ Keneghan netted for the county side but goals from Thisea Zabatakis 2, Eoin Begley and Eoin Burton sealed the win for Corbally.

James O'Grady was on target for Dromore Celtic but opponents Geraldines replied with four from Bhraaj Thapa 2, Mahdi Mirzay and Calvin Robinson.

Newport are also joint tops in the Under 17’s after a 4-2 win over Granville Rgs. Sean McHugo, Eoghan Flynn, Ciarán Carey and an own goal accounted for the scores.

Tuohy Cup Draw:
The draw for the Premier League’s Tuohy Cup was made in midweek and resulted as follows;