How the semi-finalists rate in the Munster Schools Senior Cup 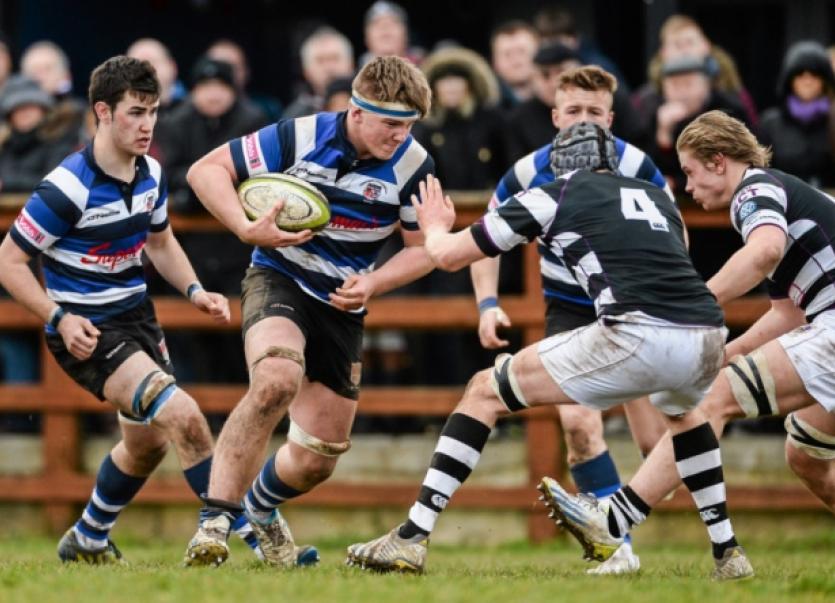 With four Limerick schools in the Munster Senior Cup semi-finals this week we take a look at their strengths and weaknesses.

With four Limerick schools in the Munster Senior Cup semi-finals this week we take a look at their strengths and weaknesses.

STORY SO FAR: Were 39-0 winners over CBC in the opening round when they ran in six tries but needed a replay to see off PBC 15-3 in the quarter-final after initially drawing 21-21. A star-studded team with eight of last year’s cup winners, they play a high-tempo game and have ran in 11 tries in their three games to date

STRENGTHS: They are a well-balanced side with Mike O’Donnell an Irish U-19 prop and second rows Johnny Keane and Robbie Scott good lineout operators and big ball carriers. Munster U-19 No8 Cormac Blake is also a fine player. Outhalf Fionn McGibney possesses a cultured left foot while the centre pairing of JJ O’Neill and Will Leonard looks the best in the competition. Winger Calvin Nash has scored three tries while they also have a strong bench

WEAKNESSES: Will three games in nine days get the better of them? They’re the hottest of favourites but even allowing for their youth, three games of such intensity in a short spell could take its toll

STORY SO FAR: Had a 17-13 win over Glenstal in the opening game and then were 22-20 winners over CBC last Wednesday. Have scored six tries in their two games

STRENGTHS: Full-back Stephen Fitzgerald looks like a real star in the making and he has two tries to his name already - the one against CBC was a real gem. Outhalf David O’Mahony is also a lovely player while wingers Brion Moriarty and Liam Brock are both hugely pacey. Up front captain Kelvin Brown is a powerful No 8, hooker Shane Fenton is a good ball carrier and flanker Jerry McCabe is used well in the lineout and also gets through a lot of work around the field

WEAKNESSES: They started the competition as favourites but have made hard work of winning both their games. The three tries they conceded were all sloppy and avoidable but if they can cut out those mistakes then they will certainly have a chance of going the distance. Tradition is against them but this is a fine side

STORY SO FAR: They drew 8-8 with PBC in their opening game but were deemed winners by virtue of scoring the first try. They then turned in a fine performance against Rockwell last Wednesday when they controlled the game and were 23-10 winners in Grove Island.

STRENGTHS: Hooker Luke O’Halloran and the backrow of Tom O’Dwyer, Ben Kilkenny and John Foley are all in fine form while outhalf Alan Wallace is a reliable goal-kicker and centre Edward O’Keeffe is a powerful runner. Head coach John Broderick is hugely experienced and they’ll play the game to their strengths - just as they did when beating Rockwell. Know how to play cup rugby and their proud tradition can’t be discounted. Playing again in Grove Island in today’s semi-final should also be a slight advantage

WEAKNESSES: Have only scored two tries in their two games, the lowest of the remaining sides, and if their defence is breached - or Wallace has an off day with the boot - can they put together a match-winning tally?

STORY SO FAR: Caused the shock of the opening round when they beat Rockwell 20-13 and followed that up with a composed 20-10 win over Glenstal in the quarter-final

STRENGTHS: They are a well-drilled side and up front they have impressive performers in Mark O’Mara, Stuart Hoare and Ronan Murphy while outhalf Mark McCarthy, centre John Fox (scorer of that wonder try against Rockwell) and full-back and goal-kicker Conor Linehan are all quality players. And, having won last year’s Junior Cup, confidence is high

WEAKNESSES: Is this a year too soon for them? Their entire front row of Joey Conway, Mark O’Mara and Conor Myers were all on last year’s Junior Cup winning team and despite their undoubted ability, they are giving up a lot in age. Crescent are an older side and the favourites to win the competition outright so Castletroy could be up against it