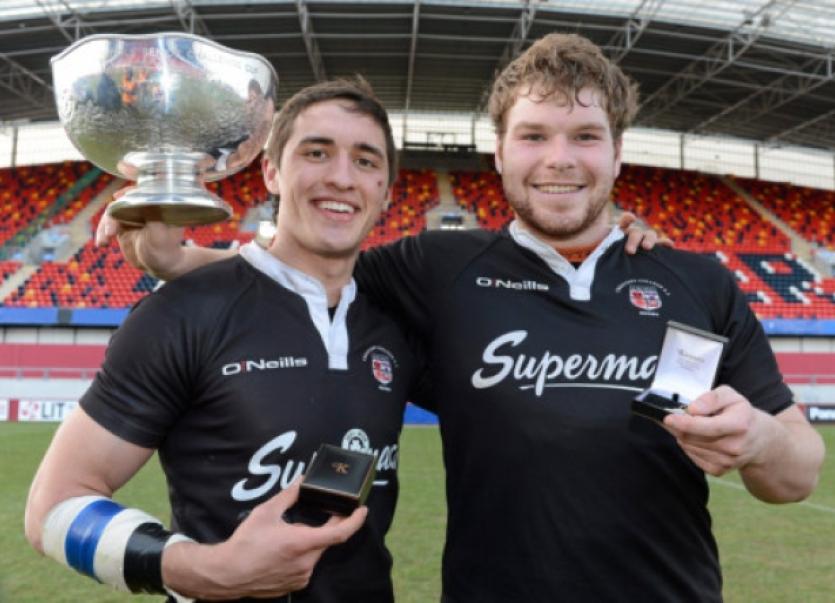 Eighteen-year-old O’Shea is a key member of the Irish squad which competes in the Justin Bridou FIRA/AER European Under 18s Championship in Grenoble, France. Ireland open their campaign against Georgia this Friday (6pm Irish). O’Shea is the only Limerick-based player to be included in the squad and one of just two Munster players to travel to France. This week’s Munster Schools Senior Cup success was especially sweet for O’Shea who battled back from ankle surgery to feature for Crescent in the final rounds of their Senior Cup success. It also meant international sprinter O’Shea added a Senior Cup medal to his impressive haul which includes two Junior Cup medals from 2010 and 2011, as well as McCarthy Cup and Bowen Shield medals.

Greg O’Shea said: “It is unbelievable, an unreal feeling to the win the Cup. I can’t believe it.

“My backs coach with the Irish U-18 team Mark Butler is coach with Rockwell College. I can’t do any celebrating over the Senior Cup win. I have to rest up because we are flying to Grenoble in France on Wednesday for the European U-18 Championships. If we get through the Georgia match on Friday, we would be in the semi-final. The timing of the tournament is not too great for the study, but I will bring the books with me.

“Back in September I hurt the right ankle a bit playing with Munster Schools. Then I hurt it again in October playing against CBC. I went up to Santry Sports Clinic then and had to have surgery on it. There were some moments sitting at home which were horrible, wondering if I would get back in time. The lads in the Munster set up helped me out a lot, the likes of Fergal O’Callaghan. I worked hard myself too and thankfully I got back to be involved. I came back into the side for the start of March and the semi-final against CBC. It was all worth it.”

“We were 6-0 down and kept throwing everything at CBC in those final 15 minutes,” O’Shea said.

“Conan Doyle gave us a move called ‘turkey’. I am not sure where he got it. We tried it out and managed to score off it. We started out in first year with Tony Trehy and Len Dinneen. That was the start of the project, working up to the win against Rockwell. For the past year or two I have been able to combine the rugby with athletics. I have been able to do both, but I will have to choose one over the other in the long-run. At the moment, I am leaning towards rugby, because of the team element of it, but I love athletics too. Rugby is my big family sport.”