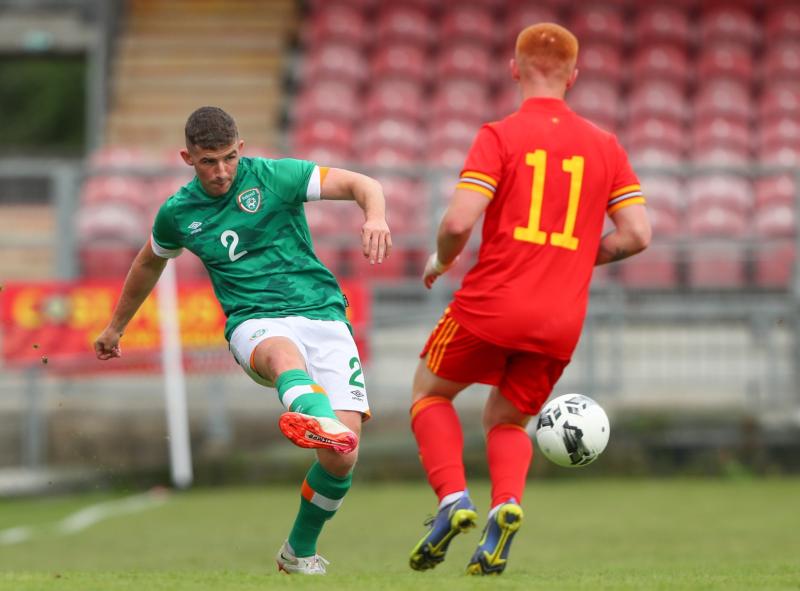 Chris Smith in action for Ireland against Wales. PIC: Sportsfile

TWO from west Limerick lined out for the Republic of Ireland on Saturday afternoon as they defeated Wales 2-1 in a UEFA Regions Cup Amateur International Friendly at Turner’s Cross.

Newcastle West's AJ O'Connor started the game in midfield and would later revert into a defensive role.

O'Connor currently plays his junior soccer with Limerick city side Fairview Rangers and on Saturday he became the club's 20th junior international.

Abbeyfeale's Chris Smith was introduced as a second half substitute. Smith currently plays his junior soccer with St Michaels of Tipperary.

Two goals from the Rockmount duo Eoin Murphy and Luke Casey - either side of a Jack McMullen own goal - in each half proved to be decisive as Gerry Davis’ Irish side secured the victory.

It was the visitors who made the brighter start and Rockmount goalkeeper Brendan O’Connell did well to tip Jamie Cumming’s low drive wide of his far bottom right corner. His clubmate Luke Casey twice caused Wales problems with his deliveries from set pieces just before the quarter of an hour mark and shortly after Jack McMullen headed wide from a great position at the back post, centre-back Jordan Carrington was relieved to see his clearance whistle just over his own crossbar.

The Boys in Green were now in control of proceedings although they couldn’t quite create a clear-cut goal-scoring opportunity with Jimmy Carr and Eoin Murphy trying their luck from distance but neither truly troubled the Welsh keeper Cameron Darling.

But with his next effort, Murphy would give Ireland the lead as his shot from 25 yards crept into the far bottom left corner of the Shed End net with 37 minutes on the clock.

Wales responded well to that setback and moments after striker Callum Parry turned a Chris Cathrall long throw against the back post, they levelled the scores in the final seconds of injury time. Ireland again failed to deal with a Cathrall long throw and on this occasion, they paid the price as McMullen could only nod the ball into the back of his own net.

The second half was a much tamer affair as both managers used the full extent of their squad but it did spark into life in the 50th minute thanks to a sensational strike from Luke Casey which flew into the top left corner of the net from a long way.