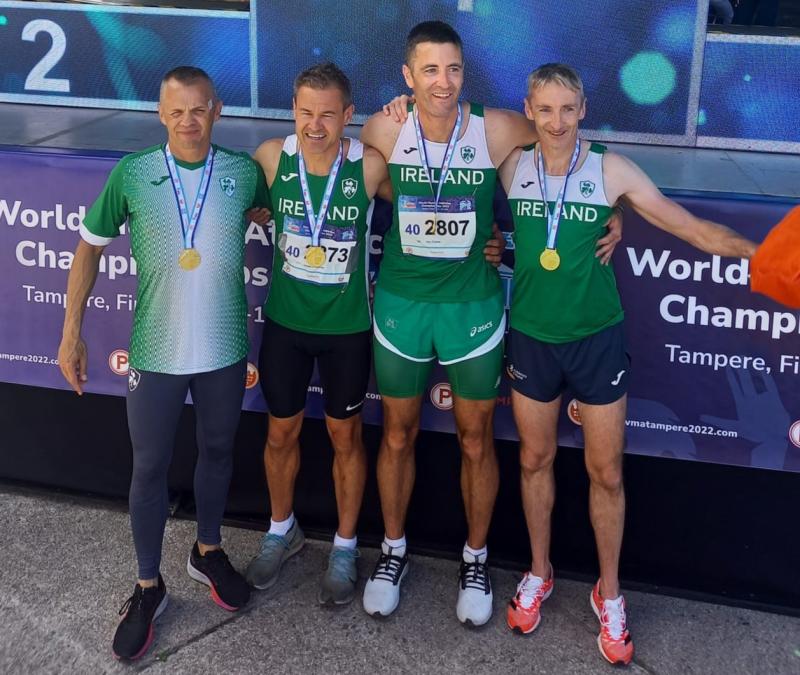 Shane O'Sullivan, second left, and Ger Cremin, right, were part of the Ireland team who won the M40 4x400m relay in the World Masters T&F Championships in Finland

In a sun drenched Tullamore Days 2 and 3 of the National Championships took place over the weekend.

There were records broken and memorable performances by many athletes from clubs throughout the country and a great ad for the sport.

Limerick clubs were well represented across the events. Just returned from representing Ireland at the European U18 championships in Israel in 400 m hurdles and qualifying for the semi final Victoria Amiadamen, Dooneen AC, completed a double gold in the 400m and 400 hurdles.

Eimear Galvin, St Marys AC Limerick, was the silver medallist in the 400 hurdles. Limerick ACs Darragh Murphy took gold in the 200m U19 in close to a record time.

Destiny Lawal, Dooneen AC, did the double also this week end winning Gold in both her 80m and 200m finals U 14.

Emer Purtill Dooneen AC followed her javelin gold U14 last week with gold in the shot put and a 4th place in the discus.

U15 Robert Joy O’Regan Sunhill Harriers won silver in the Hammer throw and had a 5th place finish in the shot put.

Aoife Grimes, Limerick AC, and Malachy McKenna, Emerald AC, both made it to their respective 250m hurdle finals u 16 in very competitive fields.

Debbie Lawal, Dooneen AC, finished just outside the medals in the u 18 100m in 4th by the tiniest of margins as did Limerick ACs Roise Gavan in the u 16 100 also finishing 4th.

The final day of competition will take place next wend with the All Ireland B competition as well as the national juvenile relays on the day. Best of luck to all competitors.

IMRA
In super-hot conditions, John Kinsella won the 10.3 Mile IMRA event in Keeper Hill in a course record time of 62:58. Sean Quirke was second a few minutes further back. John is now focusing his attention in the World Masters Mountain Running Championships in Clonmel in September.

Cork City Sports
Returning after a three-year absence and now holding ‘World Athletics Continentetal Tour Bronze Meeting’ status Niall Shanahan took part in the 3000m ‘Open’ Men’s race and finished in 5th place overall in a time of 8:34.78.
Aogan MacDomhnaill was 16th in 8.53.85 with Clubmate Killian Lynch 22nd in 9:22.02. Sarah Lavin was 2nd in the 100mh in 12.84

International
Limerick has new World Champions as Dooneen’s Shane O’Sullivan and fellow Limerick man Ger Cremin were part of the Irish M40 4x400m relay team which took Gold in a National record time at the World Masters T&F Championships in Tampere in Finland.