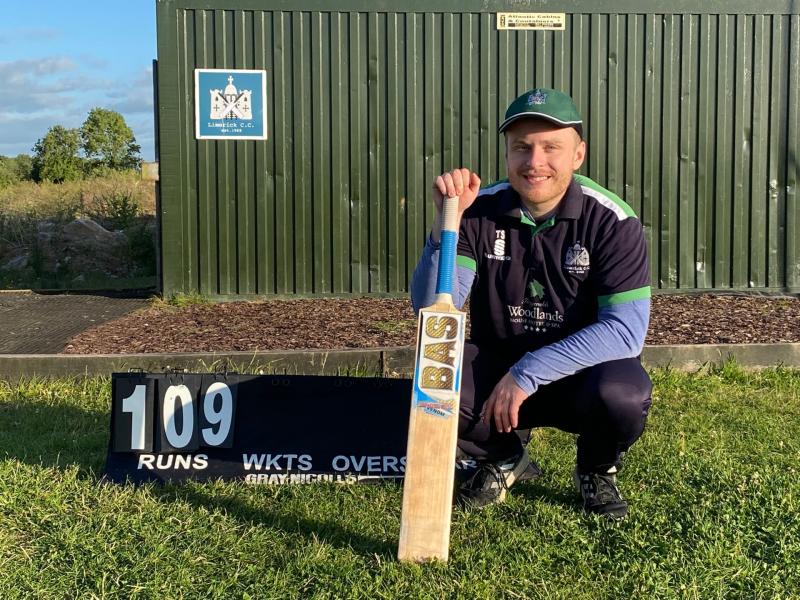 LIMERICK Cricket Club were left to rue a missed opportunity for a major scalp when falling just short of a place in the Clear Currency National Cup quarter finals against Cregagh.

The Shannonsiders were knocked out in their last 16 tie in Adare having come 36 runs short of their target.

The silver lining for the home side was the maiden century of Australian-born Tim Smithies, who gave his team a real fighting chance with a gutsy 109 before being run out from a direct hit at the non-strikers end. Limerick couldn’t provide the runs from their tail and Cregagh closed out the innings to take a victory back to Belfast and progress to the next round.

In a game of small margins, Cregagh will reflect on the game’s opening as a key battle won. The away side took full advantage of the power play with Limericks bowling not able to contain the opposition batsmen as Cregagh steered clear. It was another case of history repeating itself when Arslan Anwar turned to spin by bringing himself and Farman Yousafzai on to stem the flow. The decision paid off with Yousafzai chipping in with some key wickets and finishing with 3-34 from his eight overs. Shani Alam was brought in from the opposite end, and although on the expensive side, he was able to also take three wickets to finish on 3-43 from his set. It was the final ten overs or so that was telling in terms of the games context that gave Cregagh the edge they needed, as they were able to convert 168-6 into 248-9 come over 40 with a run rate of over 8.

Limerick knew an uphill battle was in store having not made over 200 with the bat in any game this year. However, with a quick outfield and home advantage, Limerick gave themselves every chance of taking a win. It was Cregagh who struck first in the fifth over as Arslan Sayyam was not able to pull his glove away from a short delivery which unfortunately found gully. It was the familiarised pair of Azeem Khan and Tim Smithies at the crease for the next ten overs, Azeem Khan ensuring a lengthy stay but just getting his wires crossed on 37, he was bowled for 37 and Limerick were 91-2 after 16. Sarfraz Ramay was in next but could not make it past drinks as he nudged one to cover off Ravikrishnan, yet Limerick entered the halfway point on 119-3, keeping up with the run rate and not having lost too many wickets.

The game turned on its head in the final twenty overs with Smithies struggling to find a partner in the middle. Limerick conceded two wickets in quick succession to give the away side some real momentum and Limerick still 100 runs shy of victory. Usman Khan and Farman Yousafzai came in for stints in the middle but two couldn’t find a much-needed spark as the run rate climbed. With 50 or so runs needed and six overs remaining, Smithies and Yousafzai chanced a quick single to square leg which ended in bad fortunes with Smithies finding himself just short of his ground. It was a tremendous effort from the Limerick no.3 who had batted over 30 overs and scored 109 runs from just 75 deliveries, a century which included 17x4s and 2x6s. Cregagh would then diminish any hope of a miraculous comeback as Limerick went from 196-7 to 212 all out after 37.3 overs.

Elsewhere, it was nothing short of a miserable outing for Limerick’s 3rd XI who went down to rivals Limerick Blasters by 97 runs in Ballyneety to stop Mohan and co.’s ascendancy towards the top of the Division Two table.

The Blasters batsmen showed a lot of patience at the crease and were able to punish some loose bowling from the Limerick attack. They would eventually finish on 233-6 giving Limerick the uphill task of a ‘run a ball’ chase. Despite a decent start from the Limerick openers of Yogesh Borghare and Sathya Prabhu, Limerick collapsed from 63-2 to 104-8, accumulating just 41 runs 16 overs and losing a precious amount of wickets. Limerick could muster no more than 136 all out but are still in contention of a strong finish in this division.

Limerick’s 4th XI provided the club’s only victories of the weekend and did so in stylish fashion. Ashokkumar’s side travelled to Lismore on Saturday afternoon for a double header with Cork Harlequins and Lismore respectively in the Division Three T20 League.

They made light work of the opposition as they came away with two astounding ten-wicket victories, chasing both totals down with ease to put themselves back in contention of challenging for this inaugural title. Nishant Kumar was the stand out performer of the day, his 82* against the hosts included some massive shots with a whopping 6x4s and 8x6s meaning 72 out if his 82 runs came from boundaries alone!

And, it was a battling day for the Limerick U15 side who suffered defeat to the hands of a strong Cork County side in the Mardyke.

It was most certainly a learning experience for a young LCC team who put in a stronger fielding and bowling performance than their last few games. Zaki Khalid showed some real courage with the ball as he picked up a five-for to back up fellow bowlers Ayan Ullah and Cormac Welch who picked up two wickets a piece. Limerick could only muster 58 with the bat in response to Cork’s 142 as some sharp deliveries were ultimately too quick for the younger LCC batsmen. Nonetheless, the LCC batsmen never gave up, with injured players still coming to the crease with runners to decrease the margin as much as possible.

Limerick are not down and out of the competition as they will face Cork Harlequins in a double header in ten days’ time as they travel away on June 29th with the return fixture taking place in Adare on June 30.