Limerick jockey Gary Noonan back in the winners enclosure 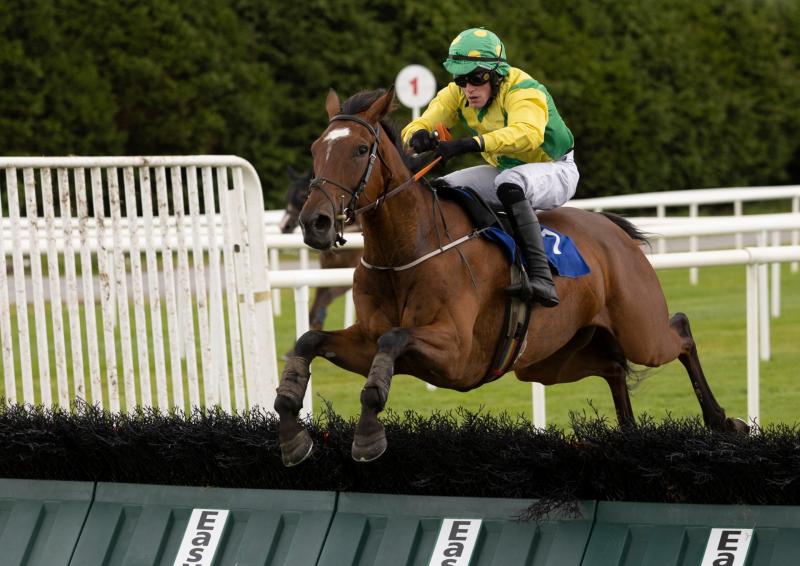 Presenting Lad and Gary Noonan on their way to winning for trainer Mark McNiff at Roscommon on Tuesday. PIC: Patrick McCann/Racing Post

NEWCASTLE WEST conditional jockey Gary Noonan landed his second success of the month and got County Sligo trainer Mark McNiff back among the winners for the first time since early May as Presenting Lad landed the second division of the two-mile opportunity handicap hurdle at Roscommon last Tuesday.

Owned by the Presenting The Lads Syndicate, the six-year-old took up the running after the third last hurdle and was always holding the late challenge of the Leslie Young-trained He’s Leading Me On.

The 4/1 shot scored by three-parts of a length and McNiff said, “I thought he’d win at Wexford last time but they walked around and he got very free which didn’t suit. Phillip Enright rode him that day and said to put a line through the run and that he’d next time, and he’s been proved right.”

Noonan was a winner again at Wexford the following evening where he teamed up with Athea trainer Eoin McCarthy to win the mares’ opportunity maiden hurdle with Steak And Onions.

Owned and bred by Tom Keogh, the well-supported 4/1 shot made much of the running to score by a length and a half from 11/5 favourite Rebel Rose which was ridden for trainer Mark Fahey by Mark McDonagh.

Conor McNamara had an easy time of things as he won the two and a half-mile novice chase on the Gordon Elliott-trained Call Me Lyreen. In the colours of the Lyreen Syndicate, the 1/4 favourite only need to be pushed put to beat 20/1 chance Trans World by four lengths.

Chris Hayes set trainer Paddy Twomey up for an across-the-card double when he partnered 8/11 favourite Treasure Trove to win the opening five-furlong maiden for two-year-olds at Down Royal on Friday evening. An 8/11 favourite in the colours of Merry Fox Stud, she led over a furlong from the finish and went clear to win by four and a half-lengths from the Jack Davison-trained Thunderbear.

Billy Lee was in the saddle as the Twomey-trained Earl Of Tyrone took the Listed Martin Molony Stakes at odds of 9/4 at Limerick.

The Joseph O'Brien-trained 4/5 favourite Raise You had a nightmare passage in the straight and had a mountain to climb once getting into the clear inside the final furlong. At the line, Twomey’s charge had a length and a quarter to spare in the colours of owner/breeder Robert Moran.

The winning trainer commented, “He hasn’t put a foot wrong all spring and I thought he was good the last day at the Curragh where he won a win-and-you’re-in qualifier for the Ebor. I wasn’t keen to run him in the Ebor from out of the handicap but he’ll go straight there now.”