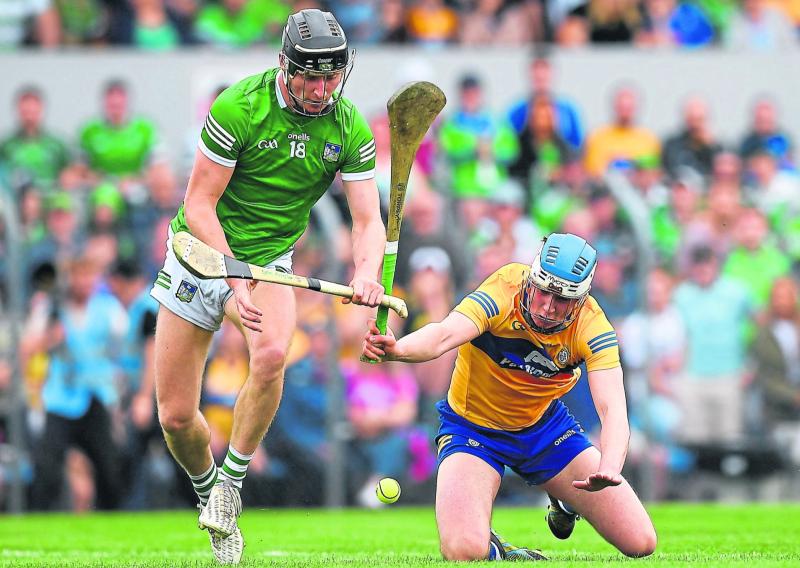 Limerick's Conor Boylan is tackled by Diarmuid Ryan, of Clare, during the drawn Munster senior hurling championship round robin fixture at Cusack Park, Ennis on Sunday

I WOULD love to start by talking about the atmosphere and what an occasion it was in Cusack Park in Ennis on Sunday, but that would only be me telling lies.

I was based above in Donnybrook in the RTE studios alongside Davy Fitzgerald. As I hit off around 10.30 in the morning, sun splitting the rocks, I nearly wanted the car to get a fit of reversing and end up in Ennis.

It was obviously going to be a sell-out, and I knew there would be an incredible atmosphere. It looked like the old times. And by that I mean the games of the 90’s, as if everything was on the line for both sides.

The first half of hurling was as good a 35 minutes as I have seen for a while. Limerick knew they were already in a Munster final, and Clare knew they were qualified, so either team could have been given a mulligan for a lacklustre performance. It was everything but that.

Players gave it everything, put their bodies on the line, and fought for every ball as if it was their last. There huge hits, battling, passion, all that you would expect to see between two rivals, but at times for some unknown reason that can go missing.

Early on, it was all about Tony Kelly. He gave some display it has to be said. So, no doubt the question has to be asked, what would you do with Tony Kelly in the Munster final? I know this might sound daft, and people will probably laugh at it, but I wouldn’t change a whole lot.

I would have full belief in the Limerick team that whoever marks him when he comes to that position can cope, while getting other bodies around him when he gains possession.

Yes, they didn’t cope on Sunday, but I think with a bigger emphasis in training over the next three weeks, could make a huge difference. I think you just accept that he is going to score three to four points from play in each game anyway.

But I wouldn’t be changing around my whole team for the sake of one player.

At times on Sunday, there was too much space been left in front of him, which can be worked on, and at times he was let get the ball and then try dispossess which is dangerous, and that can also be worked out. Also, Limerick don’t really have an out and out man marker who can cover all six positions.

If Hurler of the Year was to be given out today, I would imagine there is only one contender. Diarmaid Byrnes has taken his game to a whole new level.

At times, when Limerick were struggling over the last few games, he has been the player who has kept them in it. Clawing balls, his accuracy from both dead balls and open play, has been incredible.

In terms of the game on Sunday, it was similar to the earlier Waterford game in the Gaelic Grounds in terms of physicality. Would anyone have said at the start of the year that Clare would match Limerick physically? I don’t think so. Right now, they look like the top two teams in the country.

When the game came down the home straight, I hadn’t a clue which way it was going to go. I thought Limerick were getting on top before ‘Hego’ was given the road.

Listen, my view is the same as everyone else. I'm annoyed by it, it's not good enough, and actually it's disappointing how the officials dealt with it.

Because it was Gearoid, they presumed, in my opinion, something had happened. The umpires either saw something or they didn’t, it takes five seconds to given an answer. Anyway, not good enough, and like players when they have an off day, they may struggle and I'm sure that’s how it works for referees too.

And might I add, I have a great relationship with referees, and it's easy afterwards when you have five different angles, slow mo’s etc. In my view, guesswork, and booking lads because of past history, simply, is not good enough.

All roads leads to Thurles in three weeks now. If John Kiely's statement is correct, then Cian Lynch won't make a Munster final. Cathal O'Neill and Aaron Gillane should be back, which would be a huge addition. You would think, with them boys back, and out of Ennis into a neutral ground, that should be worth a number of points.

Who will Clare have back? I have no idea. Either way, it makes for a great final, and the first time both sides have met in a Munster final since 1996, and we all remember what happened then. Well, I don’t, I was three years of age! But it was a legendary final, with legendary moments.

Let's hope the three-year-olds of today will have moments to look back on in time to come when they look back on this year's encounter.