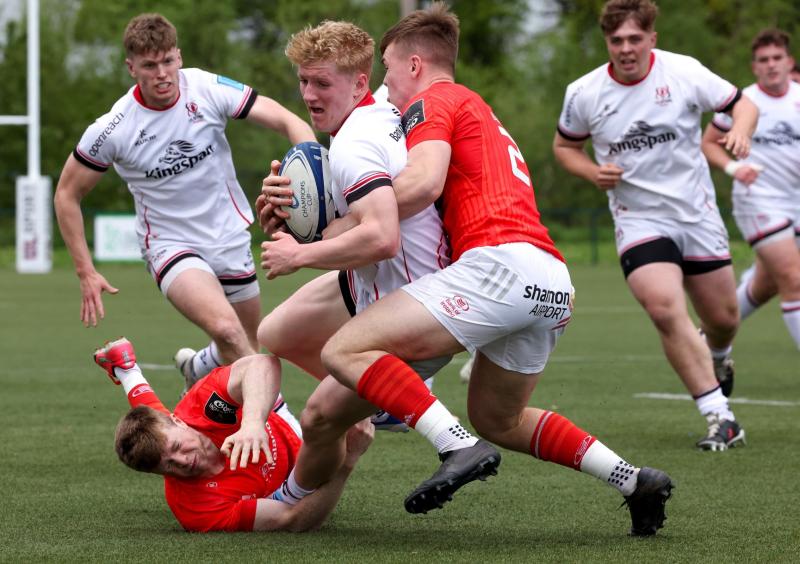 Munster's Paddy Patterson tackles Conor McKee, of Ulster, during an 'A' Interprovincial match at ULs North Campus on Friday last

MUNSTER 'A' defeated Ulster 'A' 33-22 in their fixture played at the University of Limerick North Campus.

Munster A hit the front on 20 minutes as Daniel Okeke powered over from close range.

Calvin Nash added to the lead eight minutes later as he intercepted an Ulster pass and raced 90 metres for the second Munster A try.

Liam Coombes, playing at outside centre, scored the third Munster try on 32 minutes after slicing through the Ulster defence with the recovering Aaron Sexton unable to prevent the try. Crowley converted for a 19-0 advantage.

Matt Gallagher was sin-binned just before the break for cynical play and Ulster took advantage as Jack Boal scored from close range and James Humphreys added the extras for a 19-7 half-time score.

A quick-fire Ulster brace from James McCormick and Shea O’Brien had the sides level by 46 minutes with Humphreys converting O’Brien’s impressive solo effort.

A Humphreys penalty on 60 minutes moved Ulster in front for the first time at 22-19 but Munster finished strongly with two converted tries in the final 15 minutes.

Flannery’s conversion made it 26-22 to the hosts and Coughlan rounded off the win with Munster’s fifth try late on.