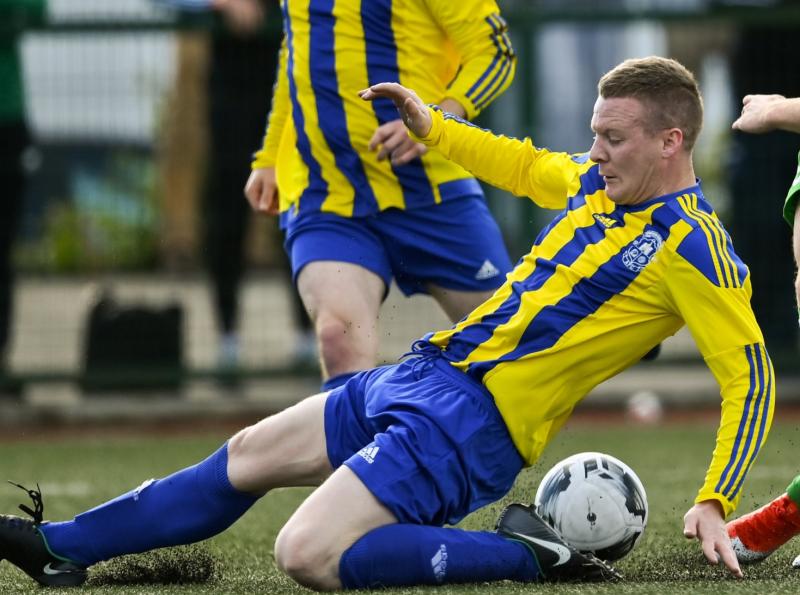 Mark Slattery, of Fairview Rangers, blocks a shot on goal from Stephen McCarthy of Killarney Celtic

Following the success of Pike Rovers in the FAI Junior Cup semi final last weekend, locals are hoping Fairview Rangers can emulate their neighbours by reaching the final of the Munster Junior Cup when they host Killarney Celtic at 5pm on Saturday in Jackman Park.
Fairview had the perfect preparation with a 2-0 win over Aisling that saw them open up a six point gap in the Premier League.
The ‘Blues’ performed well and the return of Darragh Rainsford gave them a more potent look than in recent games. Fairview will be hoping that the injury he picked up will be healed in time for Saturday’s game.
Steven Bradley also made a return and that timing couldn’t be better.
The Kerry side lead the way in the Kerry Premier League by a whopping nineteen points so will prove a formidable opposition.
With the Munster Rugby game on earlier in the day, it remains to be seen if the crowds will be attracted to the tie but either way a big performance from the locals should see them through.
In the Lawson Cup, Pike Rovers take on Charleville for a place in this season’s Lawson Cup final. We are all aware of Pike’s abilities whereas the Cork side have remained somewhat under the radar.
Promotion looks likely for the Premier A side who return to the top flight after a short stint away.
Shane Dillon is back to scoring for fun, with 34 to his name to date. He may find the opposition a little more difficult but is always a threat. Youngster Cian McNamara is another player catching the eye.
It remains to be seen if Robbie Williams will use the occasion to give game time to some of his larger squad.
In the Open Cup Division 3B side Ballynanty Rvs B will be severely tested against a very good Caherconlish side.
There is just one Premier League game for Sunday and it is a dead rubber as Regional and Nenagh are just going through the motions to the end of the season.
Depending on the result of Wednesday’s game versus Kilfrush, Granville could be crowned Div 1A champions if they can take full points from their trip to Southend.
It’s a remarkable turnaround for the Glenbrook club who were on the brink of being removed from the leagues a short time back. Few would begrudge them the success.
Division 1B is turning into a classic three hors race with a couple of games remaining.
All three are in action this weekend. Regional Utd B, mathematically in the best position take on another of the three hopefuls in Pallasgreen.
The third hopeful, Caherdavin will of course be hoping for a draw in that game as they travel to Charleville.
Division 2B is heading for another thrilling climax. Aisling Annacotty D, who hold the advantage, host Mungret Reg C while nearest rivals Newport C face a difficult task against local rivals Lisnagry A.
In midweek action this week most attention will be on Pike Rovers when they host Regional Utd in their game in hand on leaders Fairview Rgs.

It’s important for Robbie Williams side that they have their feet firmly on the ground after the excitement of last weekend. Focused, Pike should have the wherewithal to take full points but against a side with nothing to lose, they could be punished if they come into the game halfcocked.
In Division 2A, Wembley Rvs season seems to have imploded at this crucial stage. However, they can still get promoted should they win their remaining games. One of the teams who can pass them are Meanus, their opponents on Thursday.
Newport can go joint top in Division 2B when they visit Dromore Celtic while in Division Div 3A Pike Rvs B will win promotion if they can beat cup finalists Brazuca United.