Racing Review: Limerick connections to the fore at Punchestown 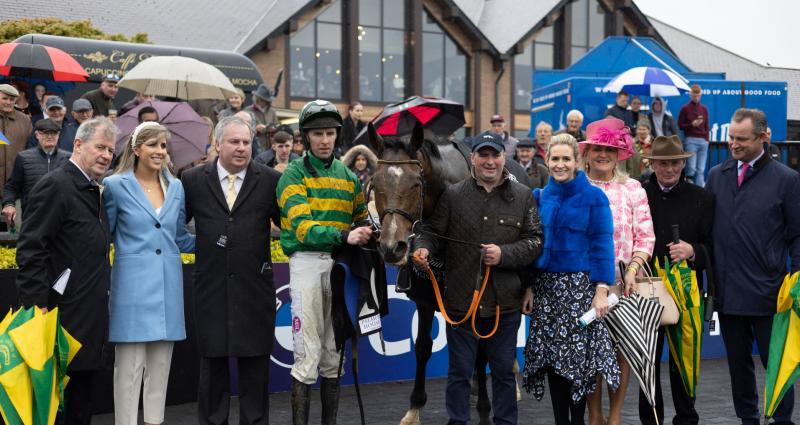 Romantic Proposal made a winning return to action when recording a cosy success under Chris Hayes in the Listed Anglesey Lodge Equine Hospital Woodlands Stakes at Naas on Monday. The Edward Lynam-trained six-year-old, racing in the colours of the Clipper Logistics Group, travelled sweetly and led well inside the final furlong to beat Ger Lyons’ front-runner Geocentric by three parts of a length. Mooneista, the 7/4 favourite, completed a clean sweep for County Meath-based trainers when taking third place for Jack Davison.

Charles Byrnes and Kilmallock amateur rider Ray Barron combined to win the bumper at Punchestown on Friday with Green Glory which scored with plenty in hand. The 25/1 chance came from well off the pace to head the front-running O’Moore Park early in the straight and pulled away to win by three and three-parts of a length from the Robert Tyner-trained Passing Well at the line. The five-year-old winner carries the colours of the Come Home Sober Syndicate and Byrnes commented, “They are a lucky bunch of owners! He had a nice first run and was still very green. He had one or two niggly problems and that is why he didn’t come out till now. I thought he would be in the first three but couldn’t say he was going to win.”

Eric McNamara saddled the JP McManus-owned Donkey Years to win the three-mile Palmerstown House Pat Taaffe Handicap Chase at Punchestown on Saturday. The 5/1 favourite was rewarded for his consistency with a one and a half-length success over the Willie Mullins-trained Recite A Prayer in the hands of Mark Walsh. McNamara said, “I thought Mark was superb on him. They went very quick early on, he kept travelling well and jumping well. When you go down to the last upsides one of Willie Mullins’ you always think you are in trouble but thanks be to God he came out on top! I wouldn't mind having a few more like him, he's the best I have and a lovely horse.”

Billy Lee and Paddy Twomey were winners again when taking the fillies’ handicap over the extended 10 furlongs with Rosscarbery at Sligo on Sunday. A 6/4 favourite on her handicap debut, the four-year-old added to her recent Dundalk maiden success when getting the better of the Tom Gibney-trained Atavique by half a length.