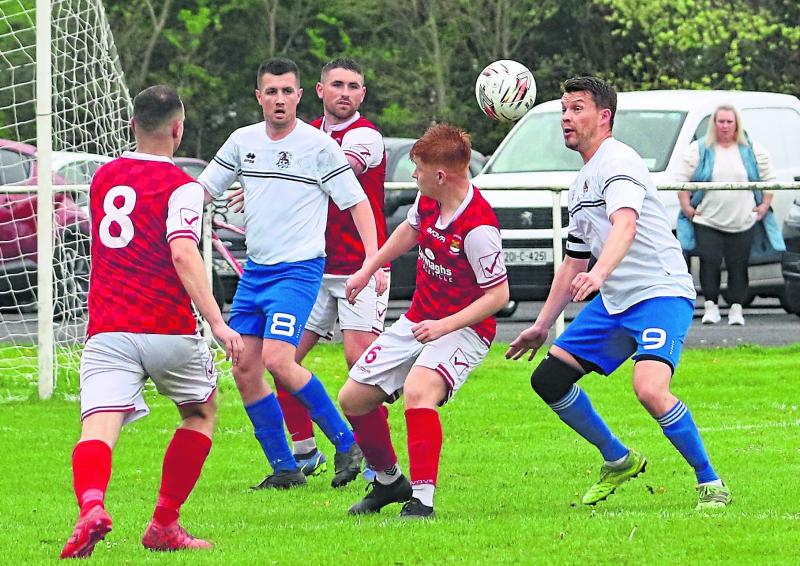 Sean Cox, of Corbally Utd, looks to control the ball against Chareville in the Premier A League match at Corbally on Sunday Picture: Brendan Gleeson

Despite conceding home advantage, Robbie Williams' men turned in a superb performance to set up a final date with Waterford side Villa FC who defeated Salthill in the other semi-final.

Once again player manager Robbie Williams had an impressive outing for the Hoops. Evan Patterson was equally effective while Pat Mullins and Colm Walsh O’Loughlin were to the forefront throughout.

Pike started the brightest and had a great chance to open the scoring when Paddy O’Malley’s cross was met by Williams but his rocket shot was blocked on the line.

Pike’s disappointment was short lived as with the next foray they found the net.

Colm Walsh O’Loughlin created the opening skinning his two markers on the wing and his ball across goal was tucked away by the in-running Evan Patterson.

Celebration turned to dismay sixty seconds later when the home side equalised with the help of an deflection off a defender.

Pike went close to regaining the lead before the break when Wayne O’Donovan and Walsh O’Loughlin combined for the latter to let fly but his effort was well saved.

After the break, Pike continued to press and when Williams was fouled, he took the free kick from which Eoin Hanrahan headed powerfully to the back of the net to get the Hoops supporters back in voice.

A number of shrewd substitutions at the correct time gave Pike a welcome boost as the home side chased an equaliser.

The final is scheduled for Sunday May 22nd with the venue to be announced tomorrow.

Fairview Rgs opened up a six-point gap at the top of the Premier League on their two remaining challengers Pike and Ballynanty Rvs, following a 2-0 win over Aisling on Sunday morning.

Fairview opened very brightly and after an impressive opening 45 minutes they carried a 2-0 lead in at the break.

On the resumption, the home side failed to carry on in the same fashion, which allowed Aisling to play their way back into the game, creating a couple of good chances but in the end, the leaders proved deserving winners.

Fairview took the lead after a flowing move that was finished in style by Jeffery Judge.

Fairview struck again before the break when former Aisling star Conor Coughlan took advantage of a slight opening to fire home from inside the box.

Ballynanty Rvs hopes of taking the title were all but ended on Sunday when they dropped two points in a 1-1 draw at Nenagh.

Things looked to be going their way when Eddie Byrnes put them ahead but a goal from Colm Hayden earned the home side a draw.

While the Blues will continue to hope, they are six points behind Fairview with just three games left to play.

In the lower tier of the Premier League, leaders Mungret Reg suffered their first defeat since the split when they fell 3-2 to a resurgent Kilmallock XI.

Eoghan Ryan PUT Mungret ahead but Tommy Heffernan levelled before half time.

Janesboro took advantage of Mungret’s slip to close the gap at the top to just one point.

However a great comeback saw Boro score twice in a few minutes through Kieran Long and Dermot Hughes to take the spoils.

Zac Mursal put Geraldines ahead versus Prospect but the visitors responded with four to take three vital points. Trevor Hogan (2), Eric Carr and Christian Mubiala netted for the winners.

In the Premier A League, leaders Carew Park were held scoreless by Murroe while Charleville closed the gap with a 5-2 win at Corbally. Cian McNamara (2), Sean McCormack, Eoin Clifford and Gary Ward scored for the Cork side who are now three points behind the leaders with two games left to play.

In Division 1A, Granville Rgs lead the way following a 2-1 win over Summerville Rvs.

An Eoghan Killian goal in extra time helped Regional past neighbours Mungret Reg to reach the final of the Division 1B Cup.

They will play Glenview in the final after they defeated Caledonians 3-1.

In Division 1B Pallasgreen and Caherdavin both won to stav locked together on 43 points at the top of the table. Pallas striker Vinny Ryan scored another hat trick in a 4-0 win over Charleville B. An own goal helped Caherdavin Celtic to a win over Aisling Annacotty.

Caherconlish reached the Division 2A Cup final following a 3-0 win over Wembley Rvs in the semi final. Conor Martin scored twice and David Corbett also netted for the winners who will meet Hyde Rgs B in the final.

The Division 2B Cup Final will be an all-Tipperary affair between Newport and Nenagh after they defeated Lisnagry A and Shelbourne B respectively.

Garry Long’s experienced Mungret Reg side qualified for a cup final date with Brazuca after beating Herbertstown in the Division 3A Cup semi-final. Alan Finucane scored the only goal of the game.