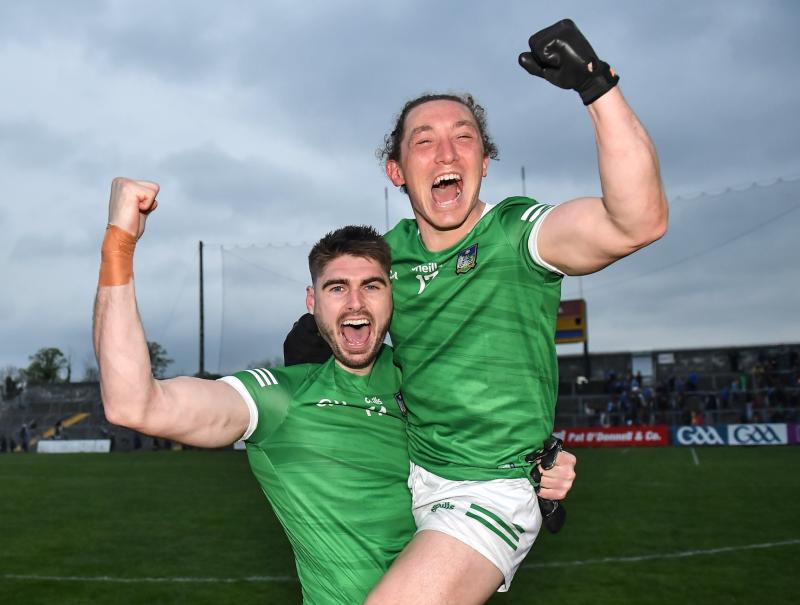 Limerick's senior football season kept on delivering in Ennis on Saturday evening AS Billy Lee's side got the better of Clare in the first ever senior championship penalty shootout to qualify for a semi-final meeting with Tipperary adding to their promotion to Division two.
In an all-action thriller where neither side left a drop in the tank, the visitors dominated the first half only to be overtaken by the ‘Banner’ deep in injury time. However Robbie Bourke's even later free equalised with the last kick of normal time.
The drama continued to extra time with Clare dominating only for Bourke to strike a goal at the end of the first period. Clare rallied to equalise just before the second period ended but had no answer to Limerick's first four expertly-struck penalties putting the result beyond reach.
Clare led within seconds as Aaron Griffin pointed off a fumble. Josh Ryan's free levelled the game, but a cagey start continued with David Tubridy and Hugh Bourke swapping scores.
Below par deliveries to Limerick's inside forwards and turnovers led to Darren O'Neill and Griffin putting the Banner into a lead of two which they held following a Darragh Treacy score.
However, getting a grip in the middle and forcing Clare into premature shots at the posts saw Limerick began to exert pressure.
Patient buildups led to Adrian Enright and Cillian Fahy drawing the sides level and, after Brian Donovan and Ryan points gave them the lead, Brian Fanning set off on a solo deep inside his own half and kept going as he rounded one challenge after another to slot to the near corner of the advancing Tristan O'Callaghan's net.
Clare's answer was immediate, Griffin fisting over off a long solo and, after Ryan replied off a free, they pulled themselves back into contact as Mike Donovan's foul on Gavin Cooney resulted in Tubridy driving the penalty past Donal O'Sullivan.
However, Limerick managed a final attack, drawing the foul for Ryan to extend their lead at half-time to 1-9 to 1-6.
Ryan restarted with a long free, which was met immediately by O'Neill fisting off a long solo from Pearse Lillis.
The margin remained at two as Cleary replied to Ryan's free.
Clare, who were doing better after switching to the long kickout, took control of the middle, pulled closer when Cooney's shot looped over.
Sub Brendan Rouine ended a barren spell by sending over the equaliser and, just before the game moved into the six added minutes, Clare pressure looked like paying off when Cooney collected off a turnover only to be denied by Donal O'Sullivan's outstretched leg.
The home crowd thought they had finally won it when Jamie Malone put them ahead deep into injury time but Conor Lane allowed just one more attack and, as the whistles rang out from the sidelines, the foul was drawn for Robbie Bourke to equalise.
Cleary pointed from a free and from play as Clare showed more gas in the tank when play resumed and then struck again in reply to Bourke's free but, just as the first period was ending, Brian Donovan raced in from the right and laid off to Bourke whose goal moved Limerick 2-15 to 1-17 ahead.
Nash could have moved Limerick out of sight when he collected a long delivery only to be dispossessed by O'Callaghan as he tried to turn on the open goal but shot Limerick two ahead minutes later.
However, Clare pressure began to break down Limerick's possession game and drew frees for Rouine and Cleary just before time to send the game to penalties.
Iain Corbett, Robbie Bourke and Brian Donovan all blasted their penalties home as Cian O'Dea shot over and Conor Jordan shot wide.
Joe McGann struck the target to keep Clare in contention only for Naughton to shoot Limerick into the semi-final with one kick to spare.