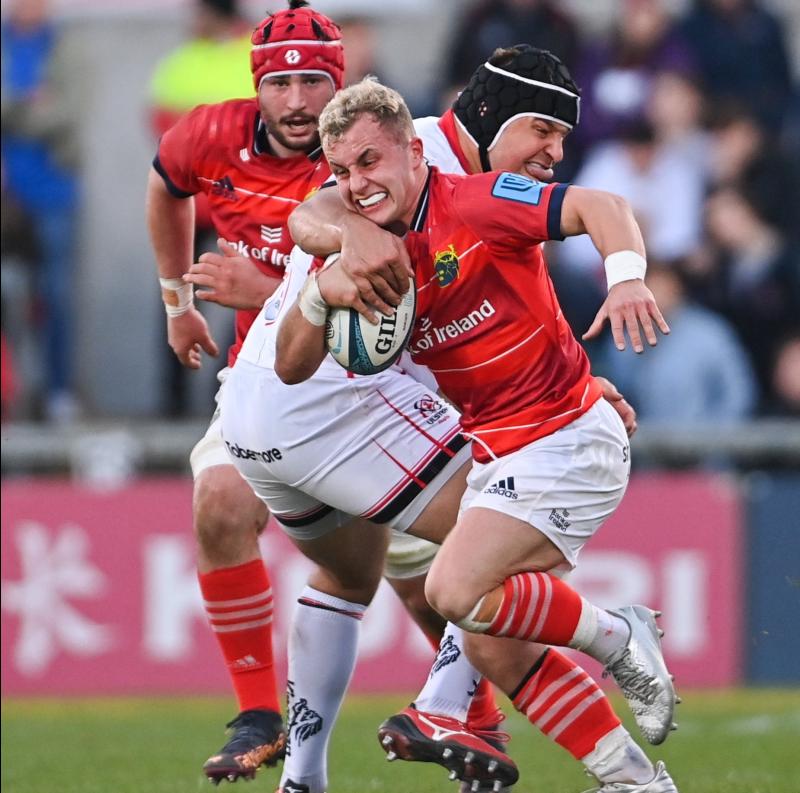 MUNSTER Rugby scored their first win on five visits to Belfast when recording a gritty 24-17 interprovincial victory over Ulster at Kingspan Stadium on Friday night.

The win sees Munster jump up to third place in the table and also secure their place in the URC play-off series.

It is the fist time that Munster have achieved a Championship double over Ulster since the 2016/17 season.

The precious win also saw Munster end their four game losing run away from home in all competitions.

Johann van Graan had made seven changes to the side which defeated Exeter Chiefs in the Heineken Champions Cup six days earlier at Thomond Park for the trip to Belfast.

Munster, after an impressive opening half, led 15-3 at half-time, against opponents who appeared to be suffering something of a hangover from their Champions Cup exit six days earlier.

Munster had been forced into a late change before kick-off as Jason Jenkins started in place of Thomas Ahern who moves to the bench after feeling unwell on Thursday night.

It was Ulster who notched the first points of the game as John Cooney landed an early penalty goal for the home side to earn a 3-0 lead.

With the lively Craig Casey hugely influential at half-back, Munster responded strongly and Joey Carbery drew the visitors level at 3-3 after landing a 12th minute penalty.

The visitors notched their first try at the start of the second quarter when prop Stephen Archer barged over from close range. Carbery's conversion made it 10-3.

Munster increased their advantage when scoring a spectacular second try thanks to some excellent continuity play between backs and forwards.

Keith Earls goes over for his side's second try in Belfast as Munster take a commanding 15-3 lead over Ulster at half-time. pic.twitter.com/blprs58gw6

World Cup-winning centre Damian de Allende was hugely influential in the lead up to score, along with second rows Kleyn and Jenkins. The ball was eventually moved out by out-half Carbery who fed Chris Farrell and he eventually spun the ball left and out to winger Keith Earls who had the most straight forward of finishes.

Carbery's conversion left 12 points between the sides at half-time.

The out-half added the opening points of the second period when landing another penalty shortly after the restart for 18-3.

Stephen Archer with the first try of the game as Munster take the lead in Belfast.

However, to their credit, Ulster hit back and a well-executed maul led to hooker Rob Herring dotting down in the 48th minute. Cooney also added the conversion from close to the touchline to leave eight points between the provincial rivals at 18-10.

Sensing their tight grip on the game was being released, Munster responded impressively and Carbery kicked a long range penalty, his third of the game, just before the hour mark to put the visitors 11 points to the good, 21-10.

Munster maintained that advantage until the 74th minute when winger Shane Daly was yellow carded. Ulster made the most of their numerical advantage when striking for their second try through Sean Reidy to reduce Munster's advantage to six points. Replacement Nathan Doak added the conversion to leave four points between the sides, 21-17.

However, Munster had the final say when Carbery converted another kick at goal with late penalty to ease any nerves for the visitors.