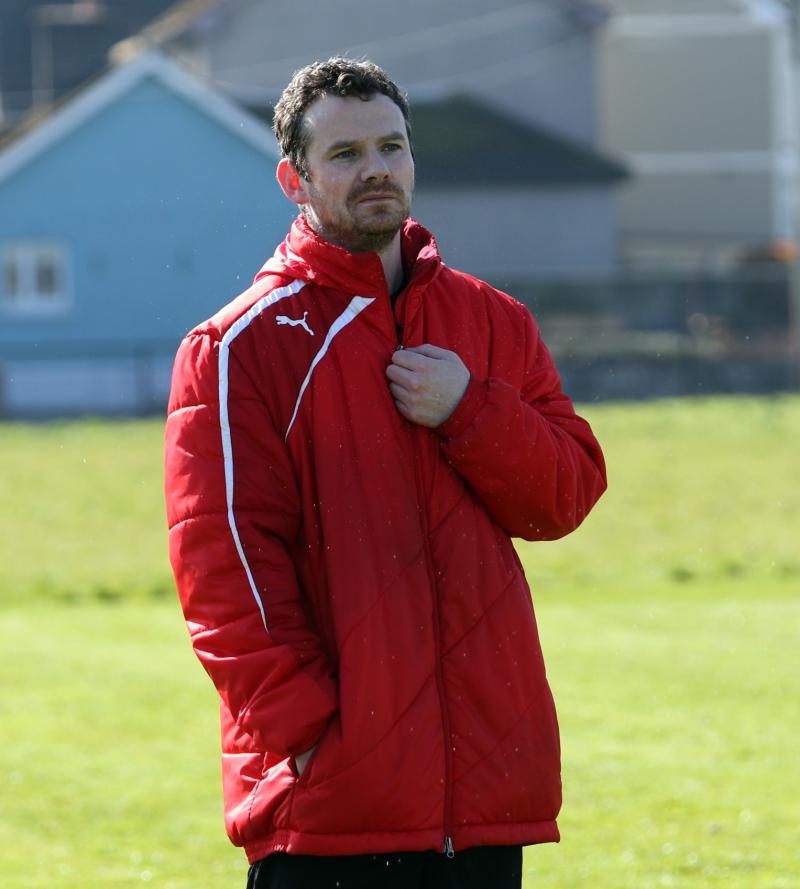 Geraldines manager Bobby Kerr watching his side in action against Kilmallock in the Premier League Picture: Brendan Gleeson

ON Sunday morning the joint league leaders in the Premier League, Pike Rvs and Fairview Rgs meet in a mouth-watering clash in the Pike Club.

The teams come into the tie in different frames of mind after last weekend’s results.

Pike, on a high following their FAI result, will take on a Fairview side smarting from a league defeat to Ballynanty Rvs last weekend.

The two teams are so well acquainted with each other they are inclined to cancel each other out but the Blues will be aware that they need to win this one so there will be no settling for a share of the spoils.

Balla' will be hoping to keep their good run going when they visit Regional Utd. Rovers have often been guilty of taking their leg off the pedal when they go into the tie as favourites. No doubt this time out they will be forewarned.

In the Premier League (Lower Tier), leaders Mungret Reg take on closest rivals Prospect Priory with Janesboro hoping to sneak in between them if they beat Geraldines. The Divisional Cups kick off this weekend with some interesting ties on offer.

Likewise in Division 1B Cup where the top two sides in the League meet when Regional Utd B welcome Caherdavin Celtic.
Janesboro slipped up in the League last weekend and will be looking to make amends in the Division 2A Cup when they host leaders Wembley Rvs.

Division 3A league leaders Pike Rvs B welcome the vastly experienced Mungret Reg D in the cup while in the Division 3B Cup, champions Ballynanty Rvs B will be looking to complete the double. First step is a tilt with Corbally Utd C.

On Wednesday evening, Jackman Park hosts a Premier A Cup match between league leaders Charleville and Moyross. The sides met last weekend and the Cork side ran out 6-3 winners. However, the game was much closer than suggested as Moyross led 3-2 with 15 minutes to play. Thursday’s Premier League tie between Aisling Annacotty and Pike Rovers will also draw the crowds.

Following Fairview’s defeat last Sunday to Ballynanty Rvs, Pike Rvs can take outright lead if they avoid defeat against an Aisling side.

Their progression to the semi finals of the FAI Junior Cup following a 2-1 win at Hibernian FC last weekend will have the Hoops on a high for Thursdays game but they need to be cautious against a well capable Aisling XI.

Aisling are in action again on Sunday when they take on Nenagh in the Lawson Cup where the winners will complete the semi final line up.

John Lysaght has stepped into the hot seat after Shane O’Hanlon’s exit and will be keen to put his own stamp on the Annacotty side.

They have a superb squad with some of the best players in town. They suffered a little blip along the way but recent wins over Ballynanty Rvs and Clonmel Town suggests a return to form.

They meet a Nenagh side much better than their league position suggests so this game might be closer than expected.

Moyross will be seeking payback and two attacking teams are sure to produce more goals for this one.