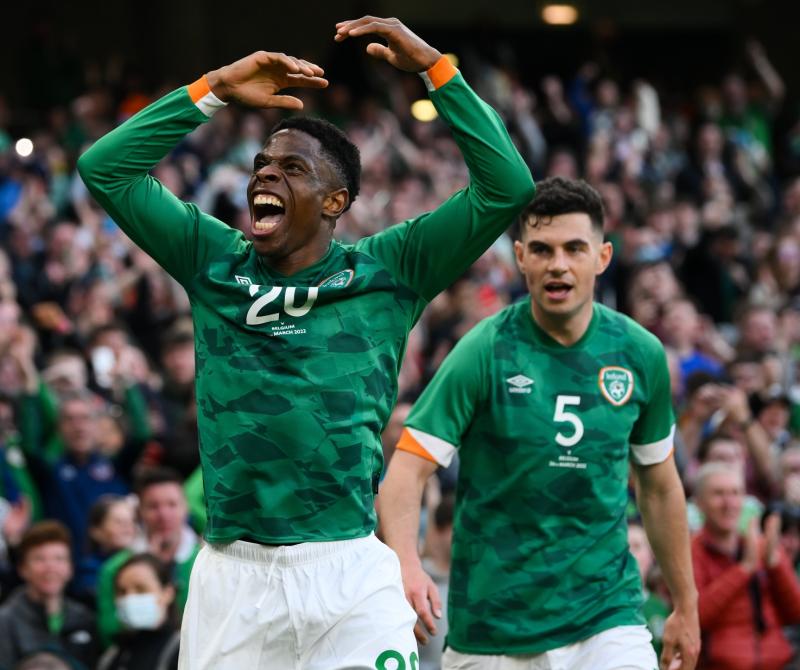 Chiedozie Ogbene, of Republic of Ireland, celebrates after scoring his side's first goal during the international friendly with Belgium at The Aviva Stadium on Saturday

REPUBLIC of Ireland boss Stephen Kenny has admitted he could not have expected former Limerick FC player Chiedozie Ogbene to have made such a spectacular start to his international career.

The 24-year-old, who plays his club football in League One with Rotherham, scored his third goal in six senior appearances for his country and also set up Alan Browne’s late equaliser in a 2-2 friendly draw with world number one side Belgium at the Aviva Stadium on Saturday.

He also played every minute of Limerick’s run to the FAI Cup semi-final, netting in the First Round win over Cobh Ramblers. In total, he made 37 competitive appearances in 2017, scoring ten goals, to add to his 15 appearances and three goals with Cork.

Asked if he could have expected Ogbene to have made such an impact so quickly, Rep of Ireland manager Kenny said: “No. I knew he would be a real threat for us and that he had great attributes, but it’s a spectacular start.

“To score three goals in two qualifiers and then a big game against the world number one team. Apart from his goals, he gives us so much at the moment.

“We ask some of the players to elevate their performances above their club form because that’s what we need to do. If we’re going to be competing with Belgium or Portugal or Serbia or any of those teams, we need our players to elevate their performances above what they can do even for their clubs playing for Ireland. That’s what we need them to do, and Chiedozie certainly is doing that.”

Trailing to Michy Batshuayi’s fine 12th-minute strike, Ireland dragged themselves back into the game courtesy of Ogbene’s acrobatic overhead effort, but looked to be heading for defeat when Hans Vanaken’s 58th-minute header crashed into Seamus Coleman and past keeper Caoimhin Kelleher.

However, they refused to throw in the towel and got their reward when Browne headed Ogbene’s 86th-minute cross emphatically past Simon Mignolet to snatch a draw.