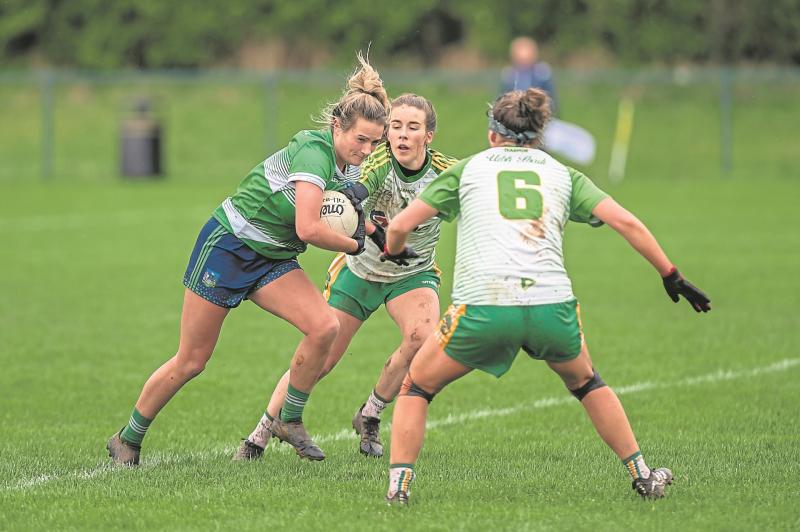 Limerick captain Roisin Ambrose sets up an attack in the win over Offaly. PIC: Mark Sheahan

IT will be a repeat of the 2015 decider when Limerick and Offaly meet in the Lidl Ladies Football league final.

Back in 2015, the Leinster side were 3-7 to 1-8 winners. Limerick trio Loretta Hanley, Kristine Reidy and Sarah O’Sullivan remain in the Limerick line-up from that final seven years ago.

Next month, Limerick will play in a seventh ever league final and chase a second title – to add to the 2016 victory over Antrim.

The Graham Shine managed Limerick arrive into the final with a 100% record after wins over Fermanagh, Carlow, Offaly and London.

Fermanagh were ahead 2-7 to 2-5 at half time in Kinnegad with Mairead Kavanagh and Cathy Mee getting the Limerick goals.

The Ulster side then powered 3-7 to 2-6 clear at the second half water break. Limerick then rallied with another Kavanagh goal and five minutes from time Catriona Davis levelled at 3-9 each.

Up popped Rebecca Delee with a late goal to secure the final spot for a Limerick side captained by Roisin Ambrose.

The April 3 final will be a repeat of the round two clash in the group stages when Limerick were 3-4 to 1-6 winners in Staker Wallace on February 19.

However, Offaly have since welcomed back Mairead Daly. In 2015 she scored 3-1 when Offaly defeated Limerick in the league final. She was absent for much of this league as she helped St Rynaghs to an All-Ireland club camogie title.