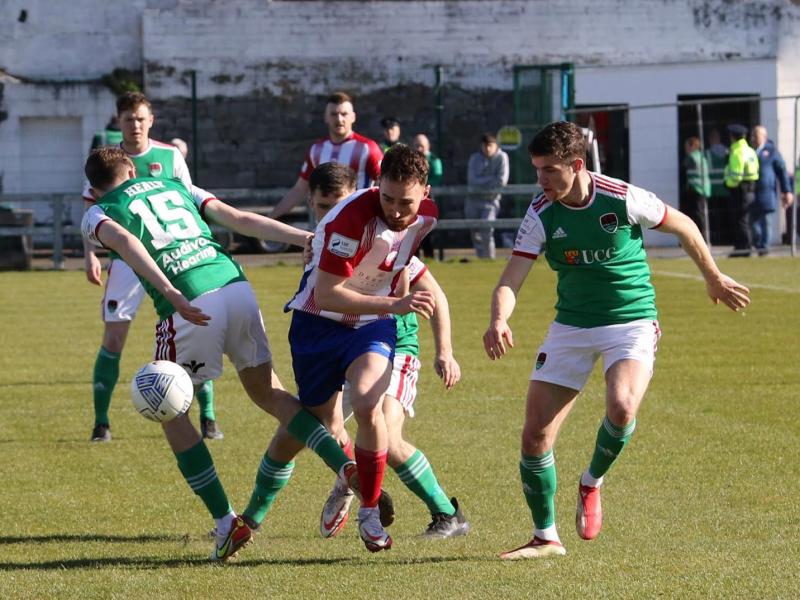 TREATY United were dismantled by Cork City in their poorest performance to date at the Markets Field on Friday afternoon.

Goals from Nenagh native Barry Coffey and a brace from Cian Bargary saw the visitors run out victorious, with the result effectively confirmed by the break.

A lot of the pre-match focus was on the Markets Field surface. It was the first time that Treaty United lined out on the pitch since their 3-0 playoff defeat to UCD back in November.

And while there was a massive area that was heavily-sanded, it passed inspection and the game went ahead, much to the relief of the crowd and club officials.

Tommy Barrett will be quick to point out that these two sides couldn’t be less alike in their structure – with Treaty United effectively amateur in nature and Cork City a full-time professional outfit – but this was the same thing last year, only for Treaty to take seven points from a possible nine out of this fixture.

However, after an opening half that produced a three-goal deficit, maybe Barrett had a point.

Three examples of fairly hesitant defending ended the game as a contest by the midpoint, and Treaty were behind as early as the third minute.

First, Barry Coffey carried the ball after the hosts lost the ball cheaply in midfield. He wasn’t closed down and duly took aim from the edge of the box, curling one into the bottom corner with aplomb.

Then Cian Bargary’s looping effort from a similar position was too hot for Jack Brady midway through the opening period, before the winger doubled his tally thanks to a close-range finish after a suspected handball that was waved away by referee Alan Patchell.

Despite having nothing to lose in the second half, there was still a lack of attacking intent from the hosts, with the result getting an exclamation point late on when Jonas Hakkinen converted from close range.