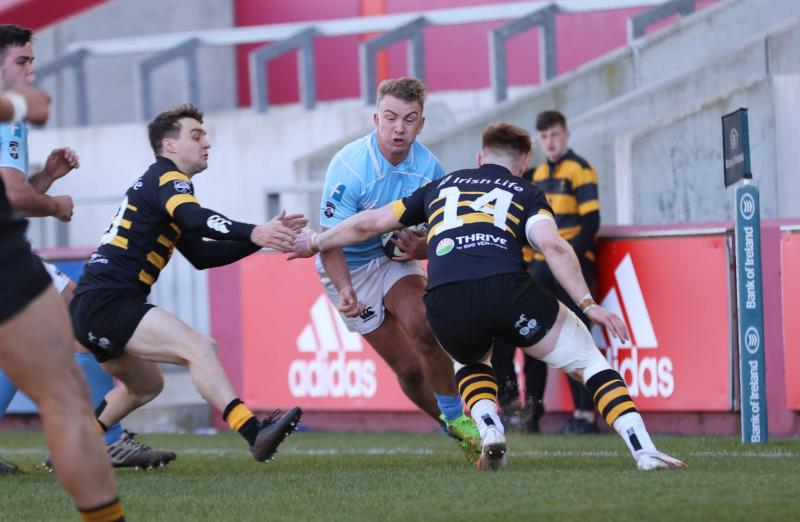 YOUNG Munsters secured their ninth ever Munster Senior Cup title with a 11-8 win over Garryowen at Thomond Park this afternoon, retaining the cup for the first time ever in their history.

Young Munster's opened the scoring after 11 minutes, with a penalty from the boot of Evan Cusack. The out half knocking over the three points, into the wind, following a high tackle by Garryowen.

Garryowen took control of the game for the next 10 minutes. Missing one shot at goal for a high tackle and another for Young Munsters being offside.

The next 10 minutes of the game were as tight as one would expect a Limerick derby, final, to be. Garryowen levelled the score after some excellent backline play gained entry into Young Munsters' 22. Much to the annoyance of the reigning champions and their supporters, referee O'Connell awarded a penalty under the sticks and this time Quilligan made no mistake. 3-3 just before the half time whistle.

Garryowen started the second half the better with Tommy O'Hora crossing the white wash for the first five pointer of the game following an excellent maul, which Garryowen went wide off of.

On the resultant hit back, the men in blue had the extra number and O'Hora crossed for the try. Quilligan missed the touchline kick, on what was a tough day to kick at Thomond Park.

Young Munsters were sprung into life and with Pa Ryan now on for O'Gorman, the former Shannon man made a carry which allowed his new centre partner Harry Fleming to bust the blue line of Garryowen's defence. Hands in the ruck from the Dooradoyle side  meant it was an easy kick for Cusack to close the gap to 8-6.

Munsters were on the score board again, five minutes later, as Cian Casey crossed for his side's first try following two excellent passes from Evan Cusack and Conor Phillips. With Cusack narrowly missing the kick, that left tie finely balanced as 11-8 with 24 minutes to go.

As with the opening half, the third quarter remained tight with both sides having chances to tick the scoreboard over. None more so than Young Munster who were awarded a penalty, in front of the posts, with five minutes to go. However a decision to tap and go, ended with the ball being knocked on, much to the delight of the Garryowen side. The men in blue came down the field with renewed purpose and held on to the ball for over 20 phases.

Conor Bartley, latching on to the ball at ruck time was the hero for Young Munster as his penalty win got the Munsters support off their seats.