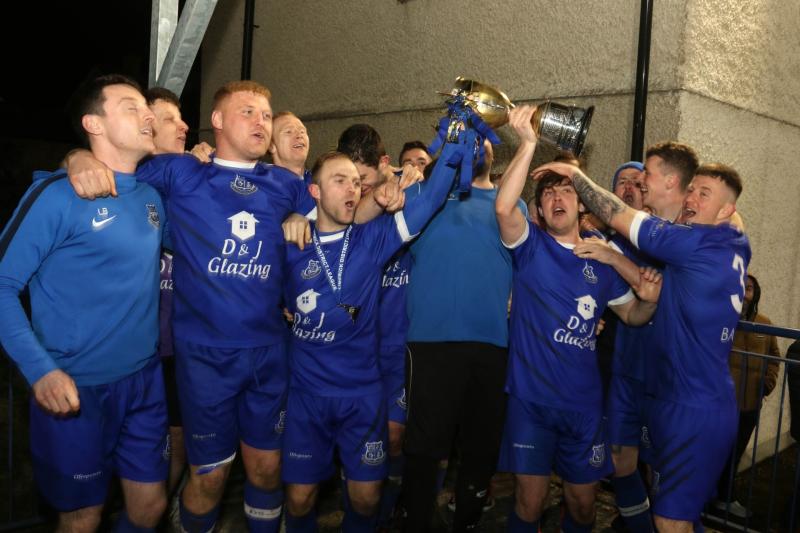 Despite going into the tie as underdogs and despite going a goal behind early on, Balla showed the spirit and character associated with the club, by fighting back to record a memorable victory.

Jeffery Judge put Fairview ahead when he latched onto a Jamie Enright through ball in the opening quarter but Balla were back on terms before the break after Thomas Byrnes took advantage of a defensive slip up to score from an acute angle.

The game was evenly poised in the second half when man of the match Adrian Power, teed up by David Donnan, fired through a crowded goalmouth into the bottom corner of the net.

As expected, Fairview went all out for an equaliser but against a rock solid Balla rearguard got little joy as the Northsiders held out to take the Premier League divisional trophy.
In the opening minutes Balla had a great chance to open the scoring when Power forced a point blank save from Savage to keep the game scoreless.

Minutes later at the other end a free kick delivered into the area by Conor Coughlan was met by AJ O’Connor but his glancing header was just wide of the mark.
A superb through ball by Powe sent the overlapping Darragh Hughes clear of the ‘View defence but on his unfavored left leg, fired wide of goal from ten yards.

The deadlock was broken on 15 minutes. Jamie Enright crossed into the area and while the ball evaded the inrunning Shane Duggan, Jeffery Judge following up volleyed to the net.

A fine save by Balla keeper Stephen McNamara minutes later prevented Fairview from doubling their lead after Russell Quirke met Martin Deady’s cross but his goal bound header was forced over the top.
Overplaying the ball across their goal nearly cost Fairview when Power intercepted Josh Considine’s pass but Savage saved the defender’s blushes with a fine save and at the other end Coughlan’s mazy run was thwarted by Aidan Hurley’s interception with a number of Fairview players waiting to pounce.

From a Fairview corner, a quick breakaway saw Eddie Byrnes slip the ball through for Thomas Byrnes. Savage raced from his goal wand while he got in a block, the ball rebounded kindly for Byrnes who fired in from near the end line to level the scores.
Just before the break Judge took off on a superb run that took him in along the end line and pull back for Quirke who was unable to keep it under the crossbar. After the break Seamus Moloney got time to turn and shoot when the ball fell to him from an Eddie Byrnes corner but he was just too high.

The winning goal came in Ball’s next attack. Jake Dillon did well to close down Savage’s attempted delivery which only fell to the unmarked Donnan. A clever ball to Power saw the winger cut inside onto his right foot and fire a low shot through a crowded goalmouth into the net.

Fairview introduced AJ Moloney and Eoin Duff and almost immediately they showed more menace up front.
The pair combined to send the latter through on the left but he fired across goal and wide of the target.
Minutes later Moloney tried his luck from outside the box which saw McNamara go full length to keep out and minutes later Quirke was over again after good build up play.

Fairview continued to push for an equaliser but Balla looked just as likely to score next with the threat they posed with a quick breakaway. As it transpired defences held out.
Balla will be buzzing with the victory. Their management team of Dunphy, Considine and Braddish had their homework done for Wednesday’s tie, succeeding in keeping a number of the ‘View’s key performers quiet on the night.