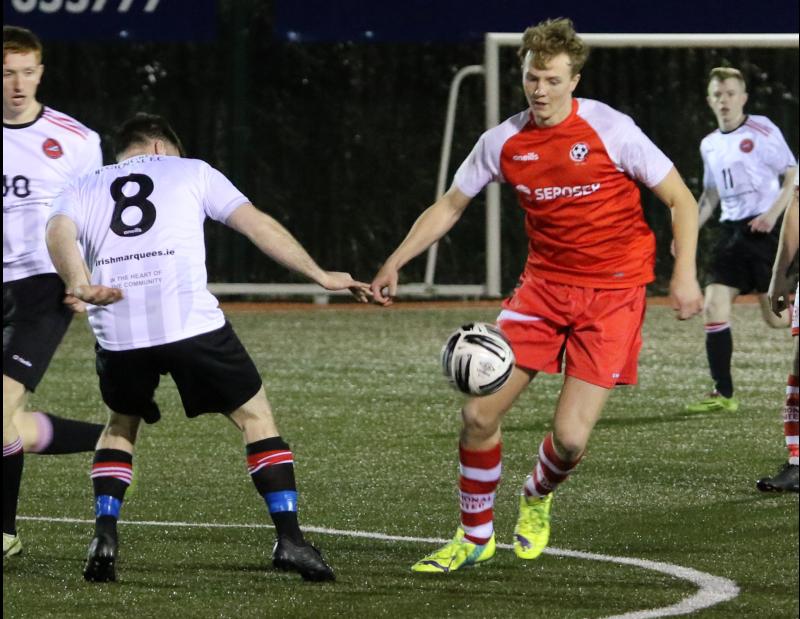 With the gale force wind at their backs, Aisling were on the front foot from the off. They looked like taking an early lead after Alan Murphy was upended in the area but Shane Clarke’s well struck penalty was superbly saved by Carrick keeper Bill Foley.

Aisling were not deterred however and took a deserved lead when Shane Tracey’s sweetly struck corner kick found it’s way directly to the net.

It got even better before the break when Adam Foley was fouled and Clarke made amends with a superb free kick that flew to the net.

The half time switch around produced a different game thereafter. With the elements at their back, the home side pinned Aisling in their own half.

Luckily for the Limerick side, John Mulready was at the top of his game, producing a host of fine saves. Ryan Waters did get in to make it a one goal game but the holders held firm to move into round five.

Conditions were so bad that in fact it made a lottery of the game, but the Cork side will not be complaining as they go into the hat for round five.

An injury in the warm up to the prolific Trevor Hogan did not help Prospect’s cause. They also lost Pat Whelan and Josh O’Rahilly to injury but they Prospect started well and were rewarded when Adrian Healy struck a wonder goal to put the Limerick side in front.

However, the Blues failed to hold on and conceded within minutes when Evan O’Sullivan equalised from close range.
The home side had the wind at their backs in the second half and pinned Prospect back.

Another high ball into the area did the damage as Ian Barry Murphy pounced to put the home side ahead.

Try as they might, Prospect were unable to get in their stride and the home side added to their advantage when Mark Murphy netted the third and crucial goal.

THE Premier A title dogfight between Charleville, Carew Park and Fairview B, has seen Moyross drift slightly off the pace. On Saturday evening they turned in an impressive display to keep in touch with the top three.

Frank Hogan’s men are determined to stay in the promotion fight and they have the firepower to achieve their goal.
Things did not seem to be going to plan when Ryan Deere fired the county boys into an early lead.

However, it took Moyross just six minutes to level when James Cleary obliged.
The lead changed hands after twenty minutes when Cian Power made it 2-1 to the home side.

Power tuned provider fifteen minutes later when he delivered an inviting ball across the face of goal for Habideen Gbadebo to arrive on queue and finish from close range.

Craig Collopy-Duggan looked to have made it 4-1 when he converted a spot kick but his run up to the kick forced Referee Stephen Rooney disallow the goal and awarded a free out.

Shortly after the break, a Collopy-Duggan back heel presented Habideen Gbadebo with the opportunity to force the ball over the line.  Collopy-Duggan scored the goal his efforts deserved to make it 5-1.

Cian Power and Collopy-Duggan both scored their second to wrap up the winning scores while Eric Conroy scored a second for Cappamore.

In the Lawson Cup, Sunday morning produced a thriller when Charleville edged out Newport in a nine-goal game that needed extra time to resolve.

Charleville, who lead the way in the Premier A League race, took the lead though Cian McNamara but Elliot Slattery responded to level the tie.

Top scorer, Shane Dillon restored Charleville’s lead which they carried in at the half time break.
After the restart Peter O'Sullivan netted for Newport to tie the game up again.

Cian McNamara scored his second of the day to restore Charleville’s lead and when Donal O'Connell made it 4-2 it looked like the game was going to script.
However, a spirited fightback by the Tipperary men saw the pull one back through Brian O'Sullivan and send the game to extra time when Diarmuid O'Riordan levelled the tie at 4-4.

Extra time saw Cian McNamara snatch victory when he completed his hat trick to give Charleville passage to a quarter final bout with Kilmallock.