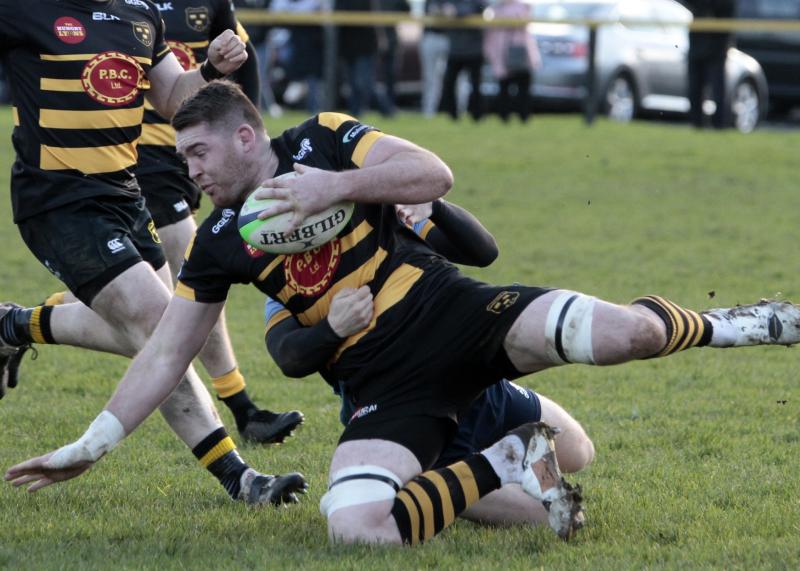 IN-FORM Young Munster made it three wins on the bounce in Division 1A of the Energia All-Ireland League when securing a dramatic 27-20 bonus point victory at Tom Clifford Park on Saturday.

Munsters' eighth victory in their 10 league games to date has seen Gearoid Prendergast's side remain in third place in the table, eight points behind leaders Clontarf and six points adrift of second-placed Lansdowne

However, the return to action in the league after a five-week break did not bring about a change in fortune for Garryowen who suffered their sixth defeat on the bounce when going down heavily, 36-7, to table toppers Clontarf at Castle Avenue.

Garryowen, who had won each of their opening four games, sit in seventh place in the league table, now 9 points off the semi-final play-off spots.

Next up in Division 1A is a crunch Limerick derby featuring Garryowen and at Dooradoyle on Saturday next, 2.30pm

Meanwhile, in Division 1B, fifth-placed Shannon secured a gritty 9-9 draw with now second-placed Highfield in Cork. Shannon had ended Highfield's eight-game winning start to the League on the back pitch at Thomond Park in mid-December.

Bruff lost out 20-13 to the Division 2Cs basement side Sunday's Well, a side they had beaten by 20 points when they met at Kilballyowen Park in December.

Bruff did pick up  a losing bonus point from the game and now occupy seventh place in the table, seven points clear of the bottom two sides.

Young Munster, who defeated UCD 18-12 at Belfield Bowl in the sides previous league fixture in December, led 8-3 after the opening quarter at Clifford Park.

The prolific Conor Hayes struck for his ninth try of the campaign, an intercept effort this time, while Evan Cusack slotted a penalty goal to help the home side into that 8-3 advantage.

Munsters' lead was still five points at half-time, 15-10, with Pa Ryan scored the home side's second five-pointer of the contest and Cusack landing the conversion.

By the hour mark the sides were level at 20 points apiece, however, with Jason Kiely grabbing a third try for the home side.

Just as the game looked like finishing in a share of the spoils, Young Munster's rising Munster star Patrick Campbell pounced to score the match-winning try to wrap up the bonus point. Campbell is also in contention to feature for the Ireland U20s in their upcoming Six Nations Championship campaign. The ever reliable Cusack also added the extras to seal Munsters' seven-point win.

Garryowen, who had suffered a 17-0 defeat to Clontarf when the sides met at Clifford Park in their previous outing in mid-December, made a very slow start to the return fixture at Castle Avenue.

The high-flying Dubliners made a quick start and had built an insurmountable 29-0 lead by half-time.

Tries from Michael Courtney and former Munster Rugby scrum-half Angus Lloyd has 'Tarf 14-0 to the good. The home side quickly added two more tries from Alex Soroka and Dylan Donnellan  to secure the bonus point by half-time.

Garryowen did hit back with the opening points of the second half as Jack Daly crossed for a well-executed try, which Tony Butler converted, for 29-7.

However, a second try from Tarf hooker Donnellan sealed a comprehensive win for the home side who were recording their fifth successive league win.

Garryowen will be desperate to produce an improved display in next Saturday's crunch Limerick derby meeting with Young Munster at Dooradoyle.

Meanwhile, in Division 1B, Shannon recorded their second eye-catching result against Highfield when claiming two points in their drawn Round 10 fixture at Woodleigh Park.

The Munster rivals were tied 3-3 at half-time. John O'Sullivan kicked the Shannon first half points with a penalty to bring his tally for the league this season to 38.

O'Sullivan and Highfield's James Taylor traded penalties to leave the contest tied at 6-6 after an hour.

Taylor's third successful kick of the game saw the home side into a narrow 9-6 lead, before O'Sullivan secured a share of the spoils for the Parish side when he dissected the posts with another penalty on 66 minutes.

Bruff's 2C meeting with relegation-threatened Sunday's Well was always likely to be a tighter affair than their 34-14 win over the 'Well five weeks ago and so it proved.

The sides were tied 10-10 at half-time in Musgrave Park. Andrew O'Byrne had a try for the Limerick side, while Paul Collins kicked a conversion and added a penalty goal.

Bruff, who were winning for the first time in four games when easing past the 'Well in December, then moved 13-10 in front when Collins converted his second penalty of the game.

However, 10 unanswered points from the Leesiders, including a penalty and converted try, saw the home side claim the four precious points on offer.

On Friday night, Old Crescent secured the bragging rights and five precious league points when easing past UL-Bohemian 34-15 in a bonus point win in Division 2A at UL North Campus.

The result sees Old Crescent sit in seventh place in the 2A table, one place and one point ahead of local rivals UL-Bohs.