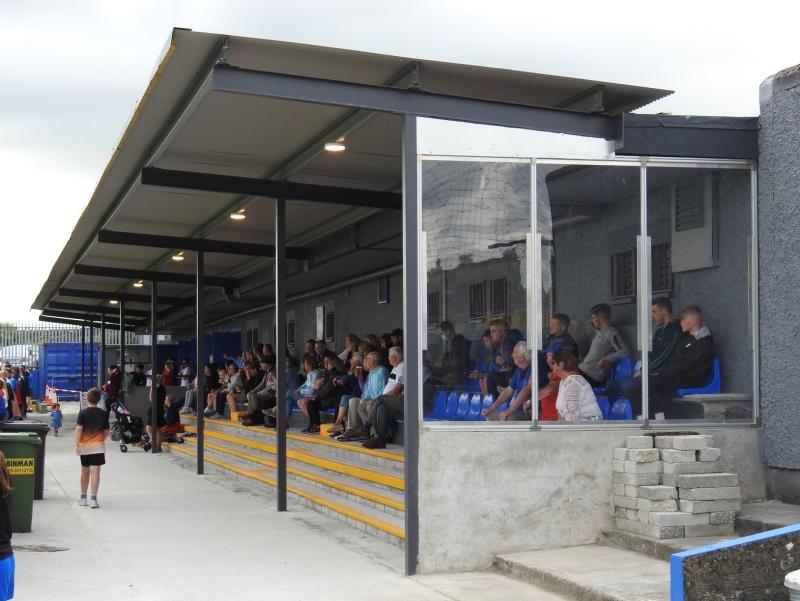 The impressive covered stand at The Fairgreen

SATURDAY will bring deserved recognition for the wonderful work done by the Fairview Rangers committee, when the club host Airtricity League Premier Division Champions Shamrock Rovers in a friendly game, which will open the club’s new grounds and officially turn on the floodlights at The Fairgreen.

The club have undertaken superb workover the last year, highlights of which were the installation of new floodlights, new home and away dugouts and the construction of a covered seated stand for spectators, all of which will be showcased on the night.

The Blue's band of volunteers deserve huge praise for their efforts and the club now sit on a facility that is the envy of most teams in the country.

On the playing side, Fairview Rangers go into the game as FAI Junior Cup holders and they also captured the Presidents Cup earlier in the season.

No doubt, the game will be played in a friendly manner, but the home side will be determined to give a good account of themselves against Stephen Bradley's men.

Covid has resulted in a restricted number of tickets being available to the public so anyone interested in attending should contact any member of the Fairview committee as soon as possible. The game will kick off on Saturday at 4.15pm.

FAI President Gerry McAnaney will attend the event at which plaques will be unveiled to mark the occasion, dedicated to the two Fairview stalwarts Eamon Heffernan and Dermot Finnan.

Eamon Heffernan was a star on and off the field for Fairview and is credited as one of the most progressive men in football over the decades, leading his club from a what was a "banana shaped field" in the 70's to it's current pristine condition.

Dermot Finnan guided Fairview Rangers to five FAI Cup successes for the Junior team. Taking the reins 30 years ago, he proved one of the best managers to grace junior soccer. He also masterminded a plethora of Munster and local trophies. It is a fitting recognition for a feat unlikely to be beaten.

Coincidentally the occasion also marks the 30th anniversary of the opening of the Club's bar following extensive renovations a few months earlier.