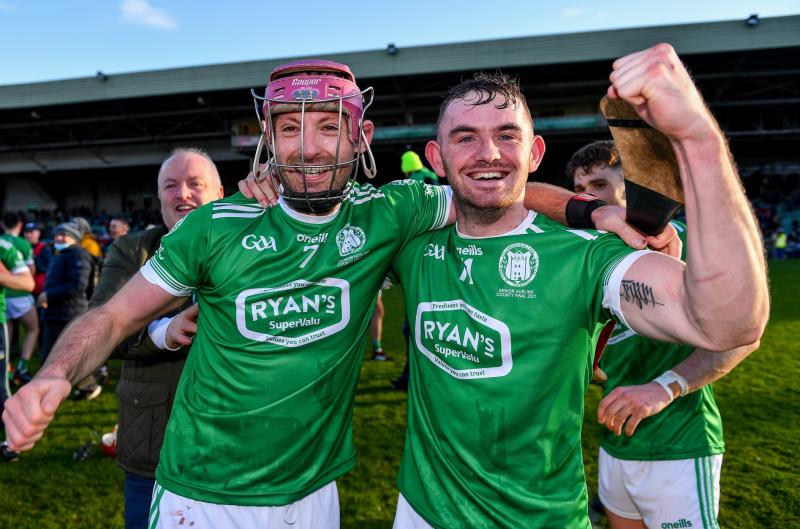 IN A throwback to 1992 Kilmallock and Newcastle West are the Limerick GAA club kingpins for 2021.

Kilmallock ended a seven year wait for a Daly Cup senior hurling title with 1-24 to 0-19 win over Patrickswell for a 12th ever Limerick SHC title.

Graeme Mulcahy turned in a Man of the Match display in the TG4 finalised final with seven points from play to ensure Philip O’Loughlin lifted the trophy for a side inspired throughout the campaign by young guns Micheal Houlihan, Oisin O’Reilly and Robbie Hanley.

"Inter-county is really a bonus - It's your club that you grow up with from the age of five or six playing with these guys,” said Mulcahy as he added club honours to his All-Ireland SHC title.

Newcastle West overcame champions Adare in the Limerick senior football final to ensure the Fr Casey Cup was draped in black and white for a third time in six years.

In tight, tense, tussle under the floodlights of the newly renamed TUS Gaelic Grounds, Newcastle West scored 1-4 in the final quarter for a 1-8 to 0-5 victory and a fifth ever title.

"We have serious talent and that doesn't always transpire into a result but it is a very good foundation," said captain Iain Corbett as Newcastle West dethroned Adare with their third title in seven years.

Mungret St Pauls are back in the senior hurling ranks for the first time in 31 years with a 4-17 to 1-12 Premier IHC final win over Cappamore.

In the curtain-raiser to the senior hurling final, Mungret blitzed the men from the east to ensure the Raheen side made amends for defeat in this final 12-months previous.

Kildimo-Pallaskenry made history when winning the county intermediate football title – a 2-10 to 0-14 final win over Rathkeale in Mick Neville Park.

The promotion means Kildimo-Pallaskenry join Adare as the only dual senior clubs in Limerick for 2022.

Who won what? Limerick GAA completes club season of 988 matches across 30 competitions

In the third tier of club hurling, Effin prevailed over Croagh-Kilfinny in the Limerick IHC final in Newcastle West – 0-22 to 0-15.
A teenage Patrick O’Donovan proved the scoring hero for the south Limerick men, who had three Quaid brothers as central figures.

In the third tier of club football, it was Fr Caseys that prevailed over rivals Newcastle West in Tournafulla; 2-8 to 1-7. The Premier JAFC title was the first adult championship for the Abbeyfeale club since 2007. They become the only club to have a senior and intermediate football team for 2022 in Limerick.

In the fourth tier of club hurling, Caherline were crowned champions. They had a 1-13 to 0-10 win over St Kierans in Kilmallock. Andrew Brennan scored 10-points as they won this title for the fourth time and returned to the intermediate ranks.

Feenagh-Kilmeedy denied Camogue Rovers for a first ever county championship title in the Limerick JAFC final.
The west Limerick side were 1-9 to 0-10 winners in the Rathkeale club grounds for what was their first junior A football title.

At junior B, there were repeats of the west and south finals on county final day.