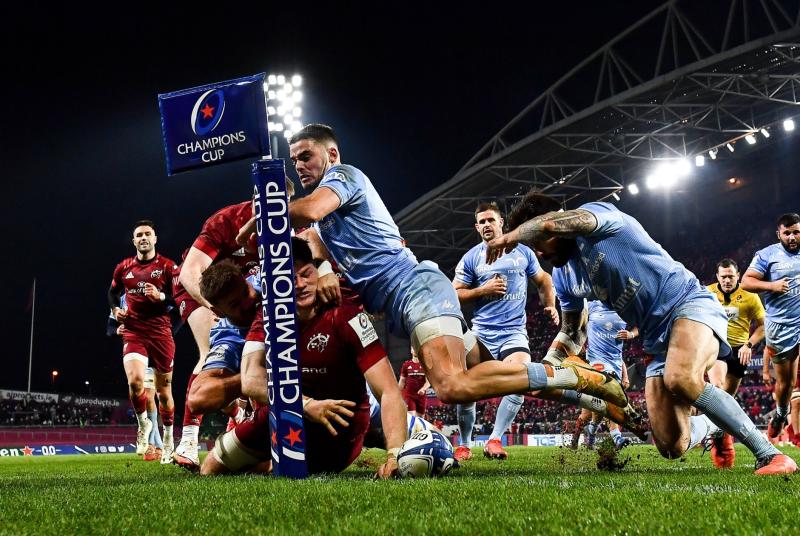 Chris Farrell in action for Munster versus Castres

Munster Rugby made it two wins from two, but could not make it two bonus point wins from two in the Champions Cup this evening with a 19-13 win over Castres at Thomond Park.

Coming into the game Munster were 26 point favourites, but they failed to delivered on that promise with a total of just one try, a second half effort from Jack O'Donoghue.

The first half was a sticky affair with Munster leading just 9-3 at the break. Three Ben Healy penalties saw the side lead with six minutes to go, before Ben Urdapilleta notched the first score for the visitors. Possession and territory were all but shared in the opening 40, as Munster failed to fire following last weekend's free flowing affair.

Damian De Allende did cross the whitewash in the opening half, however his try was ruled out by referee Matthew Carley and TMO Ian Tempest.

With the crowd growing ever anxious and Munster's struggling to find any real momentum, the second half looked to be roaring into life in the 57th minute. Jack O'Donoghue's dot down in the corner came after several Munster phases played at high tempo. The TMO once more was called upon, but he awarded this one much to the delight of the Munster men. Healy kicked the touchline conversion to make it 16-3.

With time left on the clock and a full bench to introduce one could have been forgiven for thinking Munster were going to seal those all important four tries. However the fluidity of attack from last weekend was missing and when Munster (twice) had penalties in the second half, they decided to kick for goal instead of applying field position and territory.

Another penalty from Healy, made it 19-6, much to the surprise of the fans who at that point (69 minutes) were beginning to realise that the rout they turned up for was not going to happen.

Indeed it was the visitors who were going to finish the stronger. And, with 14 men. Due to injuries to substitutes, Castres ended the game one man down, not before they scored a try however. Their number 8 Kevin Kornath crossed for a try in the 77th minute, which was converted by Urdapilleta to see the game end 19-13.

Munster's focus now turns back to domestic matters with the URC battle against Leinster on December 26 now coming into focus.