Cian Lynch: 'You want that appetite and hunger to be sparked again when you go back' 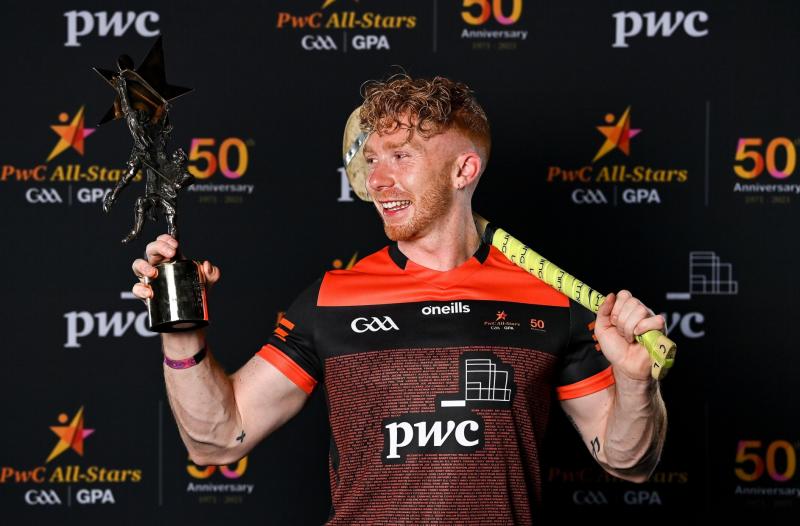 Limerick's Cian Lynch with his PwC GAA/GPA Hurler of the Year award for 2021 at RTÉ Studios in Dublin. PIC: Sportsfile

CIAN LYNCH is enjoying somewhat of a hurling detox at present.

The Limerick star ensured his place in the annals of hurling's greats when winning his second PwC GAA/GPA Hurler of the Year award last Friday night - joining Henry Shefflin as the only players to win the prestigious individual award more than once.

On Sunday, he spoke with media at a PwC event to mark his GAA/GPA Hurler of the Year award.

On October 24 last, Lynch and Patrickswell suffered a Limerick SHC final defeat to Kilmallock. That's seven weeks ago and Lynch reports he has had his hurley in his hand on just two days since.

The three-time Liam MacCarthy Cup winner stresses the break is necessary to be fully ready for 2022.

"I play two Fitzgibbon League matches with NUIG and they were the only two times I took it (hurley) out. Other than that, I wouldn’t pick it up because you want that appetite and hunger to be sparked again when you go back again."

He explained: "This time of the year, you want to be able to do other things whether it is playing a bit of indoor soccer with a few of the lads or going out meeting friends that you didn't get to meet with the last while as a result of restrictions or because you were trying to protect yourself in different bubbles".

Lynch doesn't turn 26 until the New Year but has seven years as a Limerick senior hurler under his belt.

"As you get older you get a bit more mature regards life and I would probably be a bit wiser - you know what your body is able for. When you are a young fella you are trying to train every day of the week and every spare minute that you have, whereas at this stage after seven years, you have to know that there are times you might actually have to do nothing," he outlined.

"When the season is over it is massively important to switch off and you can’t get too consumed about what is going on and get caught up in what can be a circus at times. It’s nice to take your thought process away from the whole thing."

"Drive on and have great fun and great craic," said Lynch, but he added that there is more to come from John Kiely’s charges.

“Each of us and as a group try and focus on what we can do today to better yourself for tomorrow. We all just want to go out and do the best for each other and the best for the team, for Limerick and for our clubs,” Lynch said in Sunday’s PwC media event.

He added: “What you want to do, is keep bettering yourself as a hurler and as a person, you want to push yourself in life with your job or college degree”.

“You are always looking to improve and always looking to adapt and drive on again. I know looking back at this year, every man in that panel put his hand up for a position on the starting team or on the 26 on the panel. Competition is going to be huge again and I am looking forward to it,” he said of 2022, which will start with a Munster League semi final against Tipperary or Kerry in mid-January.

But no talk of legacy or defending titles.

"No to be honest. We try to stay in the moment and especially with how changeable the world has been for the last few years. There is no point getting carried away and looking beyond today or tomorrow because no one knows what it will bring," he said.

Lynch was confirmed as Hurler of the Year as Limerick picked up a record-breaking haul of 12 All Star awards.

“Unbelievable,” said Lynch of Limerick’s dominance of the hurling selection.

“The individual award is huge for each player from any county and in any code but it is special to have 12 Limerick lads and the three boys were unfortunate to miss out too! They are the bonuses at the end of the year - the extras. For ourselves we just want to keep driving on and enjoy these few weeks off,” said Lynch.

“The award itself is huge and a massive honour on an individual level but it is a credit to everyone else in the team and panel and backroom staff in Limerick because without every other player it would not be possible to reach heights,” said the Hurler of the Year.

“Everything that you do, you do because you love the sport and love playing with the lads and love expressing yourself. We are playing because we love every minutes of it and enjoy playing together. We just take things as they come," he said modestly.