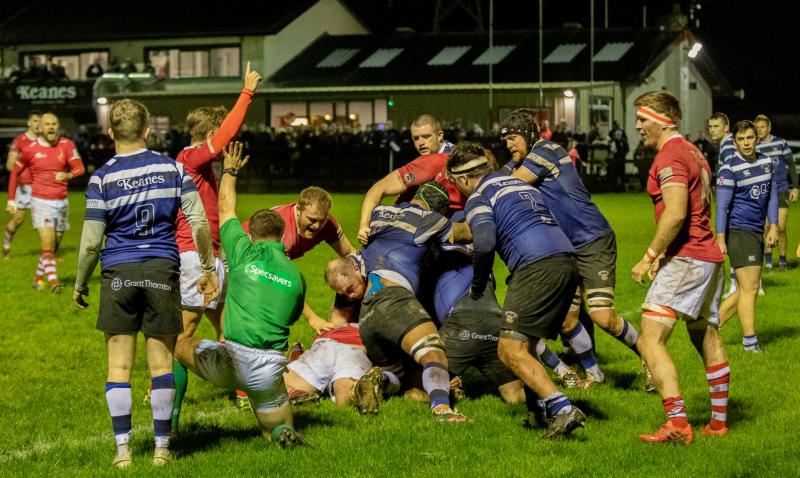 Three first half tries proved the catalyst for the Red, Red Robins to claim a maximum five point haul from the game, a result which saw the sixth-placed Annacotty side leapfrog their local rivals by two places in the 2A table.

This final round fixture before the Christmas break turned out to be an entertaining affair, played in favourable dry, calm conditions, with the full-blooded contest serving up seven tries in all.

UL-Bohs laid the foundation for this win in the opening half an hour after which they built a substantial 21-0 lead. The confidence the side would have taken from their hard fought home side over Ballymena just six days earlier was no doubt a  contributing factor to their fast start.

The visitors signaled their intent from early on, turning down a kickable penalty for a kick to the corner on 16 minutes.

Fortune favoured the brave on this occasion as UL-Bohs scored their first try off a well-executed maul. By the half hour mark the Red, Red Robins had three tries on the board through hooker Conor Botha, with two, and back-row Teddy Rowsome.

All three tries were converted by influential out-half Harry Byrne.

To their credit, Old Crescent, 30-15 winners away to Nenagh Ormond in their previous outing, haul themselves back into the contest before half time with a run of 12 unanswered points.

The hugely influential Cathal O'Reilly scored the first of the Rosbrien side's tries, while Jake Considine added a second just before the break. Ronan McKenna added the conversion to the second five-pointer to leave the score 21-12 at the change of ends.

Crucially the momentum swung back in UL-Bohs favour 11 minutes into the second half when Kian Regan dotted down from close range following a good period of pressure from the visitors to grab the bonus point try.

Byrne landed his fourth conversion of the contest to make it 28-12.

Old Crescent did give themselves a shot at gaining two bonus points from the game in the 69th minute when Jordan Higgins scored the home side's third try in the left corner after the ball was quickly spread wide.

However, Crescent ultimately came up short in their bid to secure a losing bonus or try bonus point from the game.

The atmosphere at Takumi Park also enhanced by the large number of under-age rugby players in attendance as the two Limerick clubs' young players showcased their talents in several games played before kick-off in the senior match.

The clubs two senior sides will go head-to-head in the reverse fixture in Division 2A of the Energia All-Ireland League at UL North Campus when the league resumes on Friday, January 14, 7.30pm.