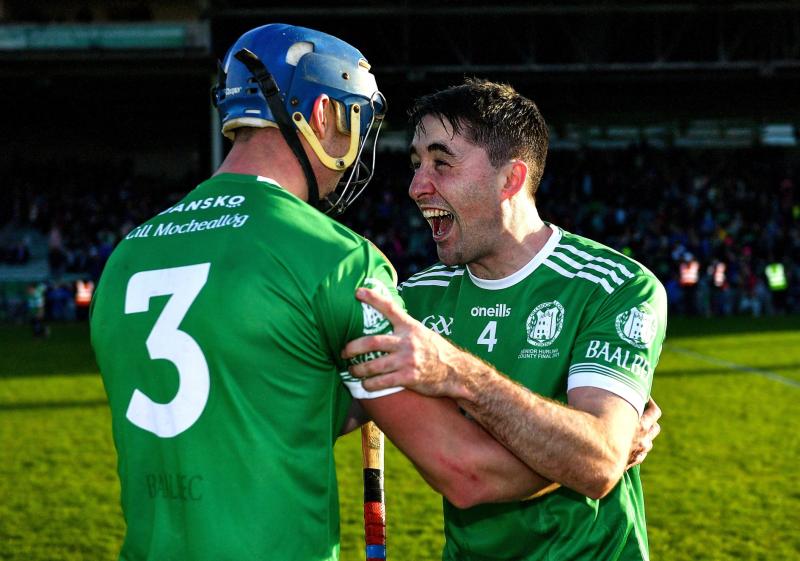 The Balbac return to provincial championship action after a seven year absence – back in 2014 they were managed by Ger O’Loughlin and won the Munster title with epic extra time victories over Sarsfields (Cork) and Cratloe (Clare).

Eight of that starting team are again likely to be in the line-up when Kilmallock face Midleton this Sunday, in a semi final that will be live on TG4 from the TUS Gaelic Grounds at 1.15. Purchase match tickets here

The sides previously met in the 1994 Munster club SHC semi final - Kilmallock winning after a replay enroute to Munster glory.

Today, Kilmallock are bidding to reach a January 8/9 Munster final against Loughmore-Castleiney or Ballygunner.

Under Tony Considine and Rory Gantley this season Oisin O’Reilly, Micheal Houlihan, David Woulfe, Ciaran O’Connor and Robbie Hanley have all securing starting berths and at times were the players to stand up when needed throughout the Limerick SHC as Kilmallock on a 12th Daly Cup title.

“We had seven weeks between the Limerick final and the Munster club semi final so that gave us the chance to give boys a couple of weeks off to recharge the batteries and go on a holiday here or there or do whatever guys needed to do and then get back into a mini pre-season and start preparing for the semi final against the Cork winners,” he said.

“I would be pretty confident that (seven weeks) won’t affect us - the group is an old enough team with a couple of new guys splashed around so there is plenty of maturity in this group. This will be our fourth Munster club campaign over the last 12 years so lads are well versed on what the Munster club is about. I would be confident enough we will be able to hit the ground running,” said Mulcahy.

While Kilmallock and Na Piarsaigh enjoyed Munster club success in the last decade, it's 2009 since a Corks side were provincial winners. Ben O'Connor was in that Newtownshandrum side and is now the Midleton coach.

Ahead of this tie with Midleton, Kilmallock have been boosted by to return of Paddy O’Loughlin.

The inter-county man hasn't played a competitive fixture since he was introduced as a substitute by John Kiely in Limerick's All-Ireland SHC final win over Waterford in December 2020.

Ahead of the 2021 season, the inter-county manager confirmed that O’Loughlin had 'withdrawn for personal reasons for a while'.

The defender didn't return to the Limerick camp during the season gone-by, nor was he part of the Kilmallock panel that won the Limerick SHC title in October.

However, O'Loughlin has since joined up with the south Limerick side, which is captained by Paddy's brother Philip.
Kilmallock report no injuries and Paddy O'Loughlin has played in a number of recent challenge games with the Limerick county champions and will be available for selection.