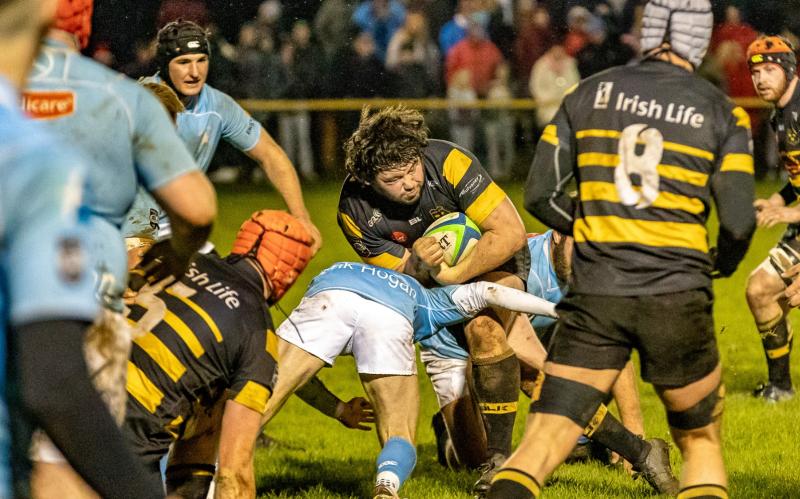 THERE were four Limerick wins in the penultimate round of Energia All-Ireland League Fixtures prior to the Christmas break on Saturday.

In Division 1A, Young Munster claimed the bragging rights and the four precious league points on offer when edging past great rivals Garryowen 20-16 in front of a bumper attendance at Clifford Park on Saturday evening.

Elsewhere, Shannon secured a timely 15-12 victory away to Malone in Division 1B to sit sixth in the table, but only one point off fourth-placed Aramagh.

Both Limerick sides in Division 2A recorded vital wins. Seventh-placed Old Crescent claimed a 30-15 bonus point victory over local rivals Nenagh Ormond at New Ormond Park, while UL-Bohemian bagged their third win of the campaign when edging past Ballymena 29-26 at ULs North Campus.

In Division 2C, Bruff are in seventh spot in the table after succumbing 35-22 to Enniscorthy in Co Wexford.

Young Munster's four-point win over Garryowen has moved the Greenfields side into fourth place in the Division 1A table, one point behind third-placed Cork Constitution.

Garryowen, who had to make-do with taking a losing bonus point from the high octane derby contest, despite producing an impressive final quarter comeback, have dropped to sixth place in the standings on the back of their four straight league defeat.

After Garryowen had taken a 3-0 lead through a Jamie Heuston penalty in the biting cold at Clifford Park, Munsters', who benefitted from a dominant scrum in this fiercely competitive derby clash, hit back with a try from Dan Walsh, converted by out-half Evan Cusack.

A second Garryowen penalty from Heuston left Munsters' one-point to the good at half-time, 7-6, as the rain began to fall.

The home side made a terrific start to the second half, racing into a 17-6 lead, with a Cusack penalty followed by Conor Hayes' eighth All-Ireland League try of the season. Cusack also added the extras.

However, to their credit, a resilient Garryowen side hauled themselves right back into the contest with 10 unanswered points as Dylan Murphy and the in-form Colm Qulligan crossed for tries.

Those scores left a single point between the sides at 17-16. However, a further Cusack penalty late on stretched Munsters' lead to four points, an advantage they managed to maintain until full-time much to the delight of the home supporters.

Meanwhile, in Division 1B, Shannon's third win of the campaign was a crucial one for the Parish side.

Shannon, who had lost two of their previous three fixtures, trailed Malone by nine points, 3-12, at half-time at Gibson Park.

Shannon recovered from the concession of an early try at Gibson Park with John O'Sullivan's penalty reducing their deficit to four points at 3-7.

However, the Ulster side then struck for a second try to lead 12-3 and they maintained their nine-point advantage until half-time.

Resilient Shannon hit back after the restart with two tries, the first from Jordan Prenderville and the second arriving when the visitors were awarded a penalty try. Those scores saw Shannon into a 15-12 lead.

It was an advantage the Parish side maintained until full time to close out a vital victory ahead of next Saturday's visit of table toppers Highfield to the back pitch at Thomond Park.

In Division 2A, Old Crescent scored four tries in claiming a maximum five-point haul against Nenagh Ormond in North Tipperary.

The Rosbrien side led 18-5 at half-time. Despite falling 0-5 in arrears, the visitors, who were backed by a strong breeze, hit back to lead 6-5 inside the opening 11 minutes with two penalty goals from Ronan McKenna.

As is tradition in Old Crescent, the singing was led by Brendan McSweeney and Eoghan Quinn, who were making their first Energia AIL starts for Old Crescent RFC. Congrats, guys! pic.twitter.com/haF52ueoP5

Crescent then increased their advantage with tries from Gary Fitzgerald and an intercept effort from Val McDermott, while McKenna added one conversion to see the Limerick side into their 13-point interval lead.

After Nenagh hit back with a try at the start of the second half, Crescent replied with a brace of tries of their own from Daniel Hurley on 56 minutes and the bonus point try from Eoin Murphy in the 75th minute.

McKenna's conversion of the latter try had the Rosbrien side into a 30-10 advantage, before Nenagh replied with a late try.

Also in Division 2A, at UL North Campus, UL-Bohemian managed three tries in the opening 35 minutes to lead  Ballymena 19-7.

However, the home side picked up a yellow card soon after and Ballymena struck for their second converted try to trail 14-19 at the interval.

The Ulster side then crossed for two tries after the restart to gain a 26-19 advantage. However, the Red, Red Robins showed admirable resolve to turn things around as a converted try and late penalty sealed a gritty three-point success and with it the four precious league points on offer.

Bruff trailed by nine points to Enniscorthy in Co Wexford, 12-21, despite managing two first half tries.

A third Bruff try brought the Kilballyowen Park side to within two points of their hosts, 19-21, in the third quarter.

However, Enniscorthy tightened their grip on the game with two further tries, as Bruff's sole response was a penalty goal.