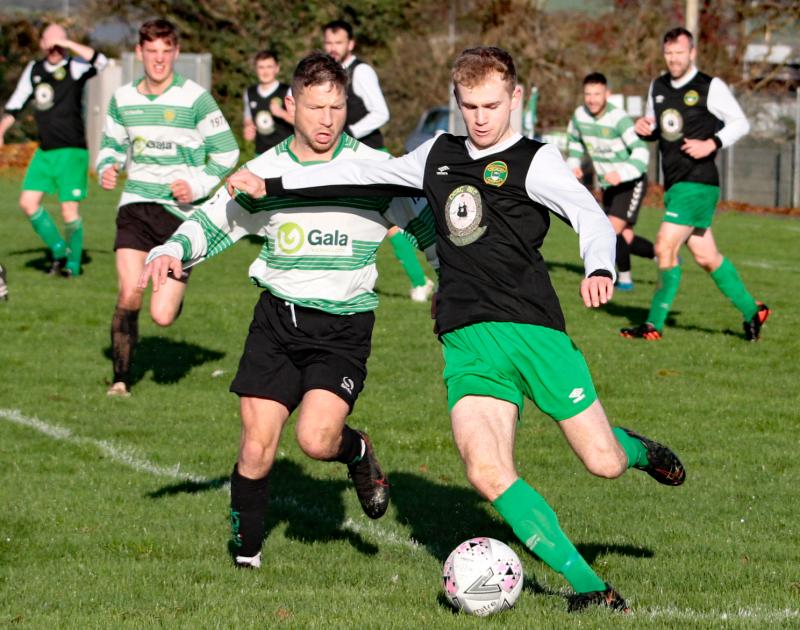 Pike Rovers 5 Nenagh AFC 1
Pike Rovers retained their three point advantage atop the Premier League when they recorded a 5-1 win over Nenagh at a cold and sunny Pike field on Sunday.

The scoreline suggests a cakewalk for Pike but despite dominating possession throughout, the visitors could well have chalked up a few goals with a little more composure.

The Hoops striker Conor Layng was the tormentor in chief bagging a hat trick, his third in consecutive weeks for the League’s top scorer.

Layng opened the scoring after twenty minutes when he dived low to head in from Wayne O’Donovan’s cross.
The lead was doubled before the break when Shane Walsh’s inswinging corner fell at the feet of Eoin Hanrahan who duly headed in from point blank range.

It was 3-0 after the break when Eoin Hanrahan’s free kick was only parried by Nenagh keeper Harry Fleming and Layng was in like a flash to tuck away the rebound.

Nenagh pulled one back when a free kick into the area was knocked into the net for an own goal.
The visitors enjoyed a good spell in which Gary Neville was called into action before Layng turned provider for Kevin Barry to make it 4-1 with a minute left.

AJ O'Connor broke the deadlock early on to put Fairview on their way. Mark Slattery tacked on a second before Steven Bradley netted from a spot kick.

Conor Coughlan had a shot deflected to the net by a defender to leave it 4-0 at the break.
After the restart Ross Mann and Eoin Duff added further to the home team’s woes to complete the scoring.

Janesboro 0 Ballynanty Rovers 5
Ballynanty Rvs were most impressive when they beat an improving Janesboro by five goals at Pearse Stadium.


Coonagh Utd 5 Kilmallock 4
Coonagh picked up a crucial three points in their bid to make the top six before the Premier League is split into two groups.
With Nenagh losing at Pike, Coonagh are now just two points behind the Tipperary side with two games to play.

Coonagh had to dig deep to see off the bottom side but they just edged it by the odd goal in nine. Brion Moriarty scored twice with Rory O'Neill, Ger Myles and Ken Meehan also obliging.

Pike Rvs B 0 Prospect Priory 5
Prospect took no heed of the predictions that Pike B could cause them trouble in their Munster Junior Cup clash on Sunday, as they turned in a business like performance to progress with ease.

Dylan Kelly Higgins was the star of the show with a superbly taken hat trick. Glen Kelly and Trevor Hogan were also on the mark for the Premier side.

Blake Curran's goal in the second half was the difference between the sides in a game that failed to invigorate the spectators.
Mungret gave a good account of themselves but the experienced Aisling XI did just enough to edge it.

In a game where neither team seemed capable of stringing a few passes together, Aisling went closest when Shane Stack struck the upright.

At the other end Pat Aherne was denied by a fine save by John Mulready.

The only goal of the game saw Blake Curran gather on the right and race on goal before cutting inside and blasting home from inside the box.