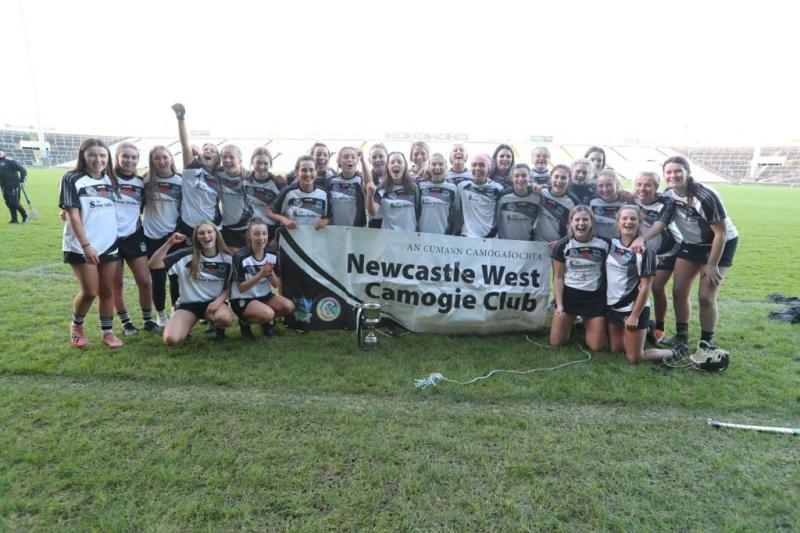 In today's Neville Jewellers sponsored final in the TUS Gaelic Grounds, Newcastle West were 1-9 to 0-8 winners over Killeedy.

This was a repeat of last year's decider which Killeedy won 1-9 to 0-7.

This time round, it was 2019 champions Newcastle West that dethroned their west Limerick rivals.

Newcastle West were aided by the first half breeze and brought a 0-6 to 0-3 lead into the break.

It was Killeedy that were first from the traps with Aine Cunningham and Marian O'Connell (free) points inside six minutes.

It was the 10th minute when a Rebecca Delee free opened the Newcastle West account. The inter-county star was to score four point in the first half.

Karen O'Leary and Delee added points from play as Newcastle West went ahead in the 12th minute.

A fine team score just before the water break had Newcastle West 0-4 to to 0-2 ahead at that break. Roisin Ambrose with that fourth point after a neat move involved Deborah Murphy and Laurie O'Connor.

Just after the brief break, Delee added another free for a 0-5 to 0-2 lead and their fifth successive point.

Fifteen minutes without a Killeedy score was ended by an O'Connell free.

And, then before the half time whistle, Delee left it a three point lead for Newcastle West.

In the second half Newcastle West remain dominant.

Karen O'Leary extended their lead after 90-seconds with a great point.

While Aisling Scanlon replied with a pointed free, a Newcastle West goal then put daylight between the teams.

Delee created the opportunity with a solo at the heart of the defence and when he off-loaded to half time substitute Iris Kennelly, the corner forward blasted high to the net for a 1-7 to 0-4 lead and just five minutes into the new half.

Before the water break, Delee and Aine Cunningham exchanged frees to leave it a six point lead for those in black and white.

On the restart Killeedy had two further points from Aine Cunningham to leave just four points between the teams and 10-minutes to play.