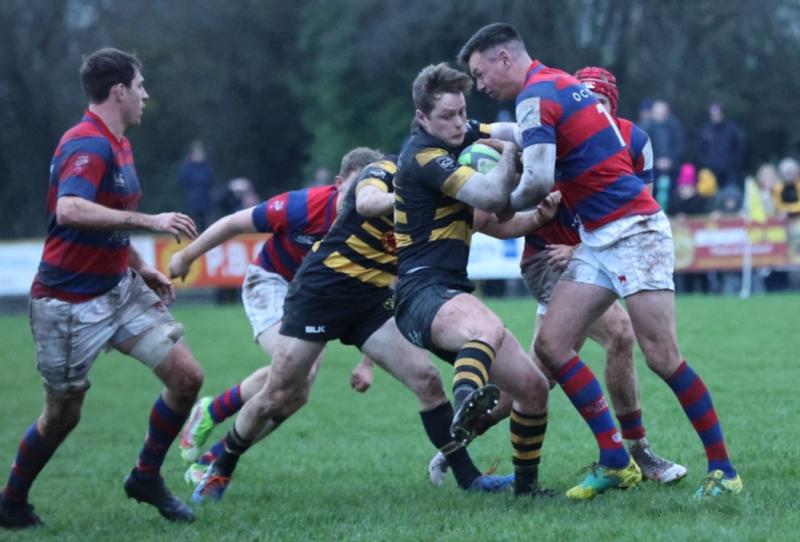 THERE were just two Limerick wins as the Energia All-Ireland League resumed on Saturday, with both Young Munster and Garryowen suffering defeats in the top division.

The two Limerick wins came courtesy of the sides competing in Division 2A, Old Crescent and UL-Bohemian.

In Division 1A, leaders Young Munster's five-game winning start to the league was ended by five-try Clontarf at Clifford Park on a 33-17 scoreline.

Visitors 'Tarf, powered by their impressive pack, laid the foundation for this win inside the opening half after which they built a substantial 21-0 lead with three converted tries, worked off well-executed mauls.

Munsters' did hit back with a try from Jack Harrington just before half-time to reduce their half-time deficit to 16 points, 5-21.

However, Tarf were awarded a penalty try 14 minutes into the second half to secure the bonus point and stretch their advantage to 28-5.

Hooker Dylan Donnellan scored a hat-trick of tries for the visitors, while flanker Adrian D'Arcy added their fifth.

To their credit, Munsters' hit back with two tries in the final quarter from Dan Walsh and Conor Hayes to reduce their arrears, but the Dubliners were simply out of sight by that stage.

Losing bonus points was the target for the home side during the final quarter. However, despite producing an improved display, they came up short on both counts.

After winning each of their opening four fixtures, Garryowen have now suffered back-to-back defeats after the Light Blues succumbed 25-13 to Terenure College at Lakelands.

This latest reverse has seen the Dooradoyle side slip to fourth place in the table, but just three points off new pacesetters Clontarf.

The home side led 6-5 at half-time. Garryowen scored a first half try from flanker Nicky Greene, before a Tony Butler penalty had the visitors 8-6 in front in the third quarter.

Three tries for 'Nure, the first off off a well-executed maul, the second from Craig Adams and a third from Alan Bennie, had the Dubliners 25-8 to the good.

Garryowen did reply with a try from Jamie Shanahan, but it wasn't enough to secure a losing bonus point.

In Division 1B, the scheduled meeting of fifth-placed Shannon and Navan at Balreask was called off due to a Covid-19 issue.

Shannon confirmed via social media that; 'Following discussions between the IRFU and Navan RFC, and following the process put in place around matches affected by Covid 19, the Energia AIL match Shannon v Navan which was due to be played this Saturday, 20th November, has been called off.

'Both teams will receive two points each and a 0-0 score shall be entered.'

In Division 2A, there were wins for the two Limerick sides, with Old Crescent edging past NUIM Barnhall 23-18 Parsonstown, while UL-Bohemian recorded a 32-24 victory over Rainey Old Boys at UL.

Seventh-placed Old Crescent trailed Barnhall 6-11 at half-time, the Limerick side's points coming courtesy of two Ronan McKenna penalties, including one on the stroke of half-time.

A third McKenna penalty on 52 minutes left just two points between the sides, 9-11, before Crescent hit the front on 65 minutes when Shane Mullally dotted down and McKenna converted for 16-11.

Home side Barnhall hit back with a 72nd minute converted try to turn the game on its ahead again and take an 18-16 lead.

However, Crescent had the final say in Co Kildare when a late Val McDermott try, converted by McKenna, helped them secure a precious 23-18 win and four league points.

Eighth-placed UL-Bohemian laid the foundation for their crucial bonus point win at home to Rainey Old Boys when leading 19-7 at half-time.

Rainey did back in the second half to trail by eight points 25-17. However, a further try for the Red, Red Robins closed out the victory.

Eoin Sweeney scored two tries for the Annacotty side, while Joe Johnston and Harry Byrne also crossed the whitewash.

In Division 2C, Bruff suffered a heart-breaking 17-15 defeat away to Omagh Academicals.

The Limerick side had to make-do with taking a losing bonus point from the game, after being denied the win by a last gasp converted try after leading 15-10 late on.