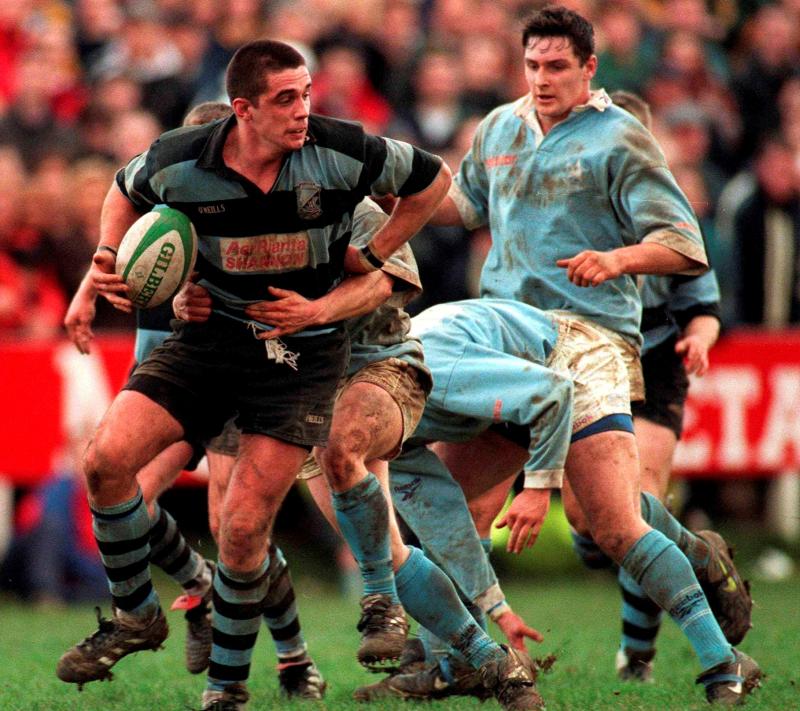 Alan Quinlan, of Shannon, is tackled by Pat Humphreys, of Garryowen, during the All-Ireland League Division 1 derby at Dooradoyle in 1998

A NEW TV documentary to be shown on TG4 this weekend celebrates the 30-year history of the All-Ireland League.

AIL sponsors Energia are celebrating 30 years of Club rugby’s premier competition this year by producing a captivating documentary featuring key contributors to the All Ireland League in Ireland.

The documentary, narrated by Máire Treasa Ní Dhubhghaill, will air on TG4 this Sunday, November 21 at 17:15, and discusses the significant benefits of the club game to the community and its contribution to Irish Rugby, highlighting the sense of passion and spirit, and its crucial importance in developing the game at a grassroots level.

Des Kavanagh, IRFU President said : “Grassroots rugby is an integral part of the Irish Rugby pathway. Many senior and academy squads in the provinces, not to mention Irish representative teams, are filled with players who started playing mini rugby with their clubs and sharpened their development at senior level in the Energia AIL. Covid-19 has been really difficult and the amateur game is no different.

There are 217 clubs on the island of Ireland, and 60 teams playing in the Energia AIL. Energia is committed to supporting the women’s game. This year, two additional teams have joined the women’s division and the documentary features several key players including former Ireland captain, Niamh Briggs.

Head of Brand at Energia, Amy O’Shaughnessy said: “It is a very exciting and interesting time to be involved with Irish Rugby from grassroots through provincial level and to the national team.

"The Energia AIL documentary is a wonderful celebration of the action both on and off the pitch and highlights some of the real talent and incredible rugby we have seen from players over the past three decades, as well as the positive impact the league has had on local communities and Irish sport and culture."