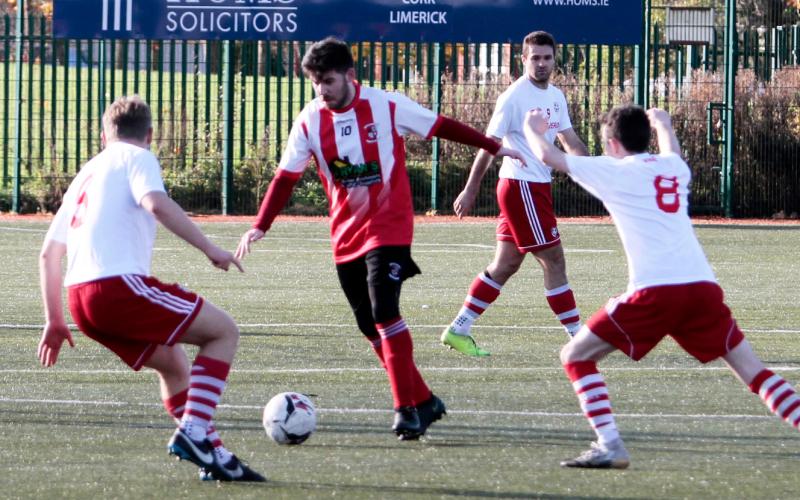 MOST attention returns to the Premier League this Sunday with two of the top three sides all in action.

Pike Rvs took over top spot last weekend with a rather easy win in Cals Park versus Prospect Priory.  It gave the Hoops a three point advantage over Fairview and Aisling Annacotty with just three games remaining in the first round of the League. At that point the League will split into top six and bottom six, so carrying an advantage into that stage could prove well worthwhile.

This Sunday Pike host a Nenagh side vying for that sixth spot. The Tipperary side have been showing hot an cold this season and are capable of causing an upset. They meet a Pike side in full flow, who seem to be improving by the game. Manager Robbie Williams has had the opportunity over the last couple of weeks to utilise his extended squad and competition for places is now at a premium. Steve McGann is top of his game while the return to the playing field of Pat Mullins is another huge boost for  the Hoops.
Fairview Rgs will be hoping for a Pike slip up when they travel to take on Mungret Regional. The Blues had an easy win over Hyde Rgs in the Munster Junior last Friday. With Conor Coughlan in the type of form that will surely attract the Irish management, they will be strong favourites to keep their Premier League charge on course.

Mungret are in need of a confidence boost. They have some superb players but are not getting the rub of the green. With the talent they have, they just need to keep plugging away and things will eventually click.
Just outside the top three are Ballynanty Rovers. They are playing a catch up game with the leading group. They are playing well but cannot afford any more slippage. They meet a resurgent Janesboro side who will not fear the battle.

The final Premier tie sees Coonagh Utd hosting Kilmallock. Coonagh are trying to catch Nenagh for that sixth spot and they will be favourites to close the gap on Sunday. Kilmallock have shipped 15 goals in their last two outings and are struggling. It’s hard to see them turning things around by Sunday.
There is one game scheduled in the Munster Junior Cup when Division A leaders Pike Rvs B host Premier outfit Prospect Priory. Prospect are on a hiding to nothing, as they are expected to win with ease and they meet a Pike side with no expectation and nothing to lose. The Hoops have some serious talent in the squad, most notably strikers Kevin Barry and Darren Hanley. They will cause Prospect trouble if they get service.

Wayne Colbert’s side were poor last weekend and will need a big improvement to avoid a giant killing event.
In the Premier A League Charleville can go joint top with Fairview Rgs B if they beat Cappamore. Third placed Carew Park will be hoping for a Charleville slip up as a victory at home to Newport would then see them move into second spot.
Division 1A leaders Granville Rgs host Southend and second placed Hyde Rgs visit Kilfrush.
Star Rvs in third meet bottom side Patrickswell.

The top two sides in Division 1B meet when Pallasgreen host Regional Utd B and in Division 3A, Herbertstown who dropped two points last weekend take on Brazuca United.

One game in the FAI Youth Cup pits Regional Utd against Charleville in Dooradoyle.

This Thursday, the Tuohy Cup continues with a quarter final between Mungret Reg and Aisling Annacotty at 7pm in Jackman Park.