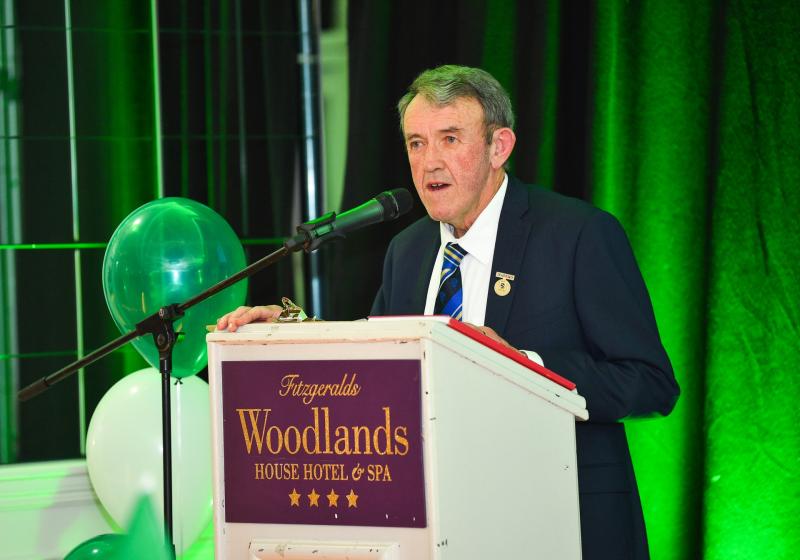 In the Woodlands House Hotel the 34 players and their management team were honoured for winning Limerick’s ninth Munster MHC title.

Manager Diarmuid Mullins praised the “commitment, attitude, determination and willingness to improve” of the players who beat Cork and Tipperary to win provincial honours.

“Ye have achieved so much but yet ye have to look forward now. Set your standards high going forward,” the manager told the 2020 U17 winners.

“This year when I had the privilege of being involved with the U20 team in Limerick we had three players starting in the first round of the championship who didn’t play minor hurling with Limerick. So a lot changes of the next couple of years. Really enjoy playing with yer clubs and aim high and try to get back playing with Limerick over the next couple of years,” outlined Mullins.

The players were presented with their medals by Limerick hurling star Cian Lynch and Munster GAA chairman Liam Lenihan.

”Some of my happiest days in Limerick were when I used to go out to the North Campus in UL on a Saturday morning to see the training that went on from 9pm until 2.30pm. Not only coaching and training the players but also coaching the coaches and giving them words of advise,” outlined Liam Lenihan of his days as Limerick GAA chairman.

“I remember Joe McKenna would also say ‘what can we do better’,” recalled Lenihan.

“Now we are living the dream. Imagine to win three senior All-Irelands in four years. Did we ever think it would happen!”

Addressing the minor hurlers, the Munster GAA chairman recalled how they won their title in extra time against Tipperary.

“There is a line in Lifting the Treaty; We are developing the hurler but we are also developing the person and that is very important because character signs through in the end and you have that in abundance, said Lenihan.

“Sport and hurling in particular will help you as you go through life. Life is not simple – there are ups and downs but at the moment we are on the crest of a wave and long may that continue.”