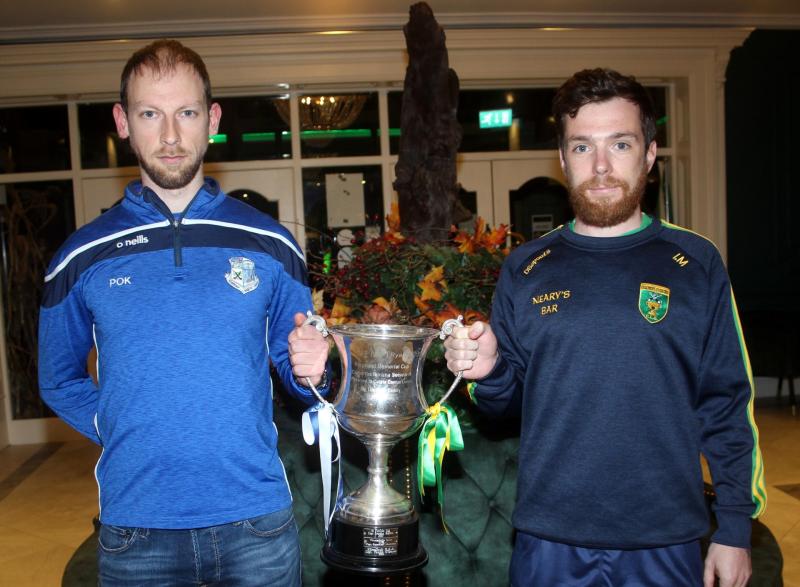 With seven of the 10 Limerick adult hurling and football club competitions now completed, there if a fixture list of just five county championship games this Saturday, November 13.

The headline fixture is the Woodlands House Hotel Limerick junior A hurling championship final in Fitzgerald Park in Kilmallock at 2pm – Caherline and St Kierans meet in the decider.

The JAHC winner will be promoted into the intermediate ranks for 2022 - replacing the relegated Tournafulla. And, Caherline or St Kierans will also progress to the December 11/12 Munster club JAHC semi final - where they will play Cork’s Ballygiblin, Passage West, St Itas or Dromtarriffe.

The men in blue and white are coached by Declan Gillane (Patrickswell).

Captained by Padraig O’Keeffe, the east Limerick side will look to Andrew Brennan, Jake Kennedy, Jack Carroll, Paraic Wixted and Daniel Murnane to return them to the intermediate ranks for the first time since 2015.

St Kierans are appearing in a third county JAHC final – bidding to add another title to their 2012 final victory.

McCarthy brothers Paudie, Johnny and Brendan remain central figures for the men in green and gold. Ian Mackessy, Eoin McEnery and semi final hero Anthony Molyuneaux are all key as St Kierans bid to be promoted back up into the county IHC for the first time since 2017.

Neither finalist reached the knockout stages last season. They actually met in the group stages – Caherline the 1-17 to 0-9 winners.

The previous meeting to that was in the 2015 Limerick IHC – St Kierans the winners on that occasion.

Back in 2014 they met with silverware on the line – the IHC County Cup Final and the west Limerick side were 0-16 to 0-7 winners.

Elsewhere, both junior B hurling championship semi finals are 3pm this Saturday – Bruff and Adare meet in Fedamore and Blackrock play Cappamore in Knocklong.

In the junior B football championship semi finals; Galbally and Knockaderry meet in Kilbreedy at 2pm, while Claughaun and Granagh-Ballingarry play in Clarina at 3pm.

Both junior B finals are in the Master Fixture for Sunday November 21.