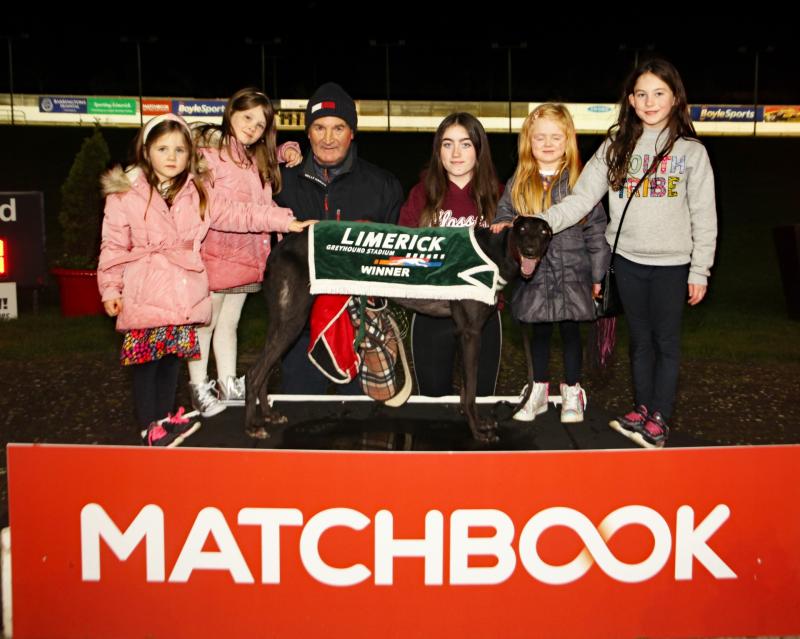 Con Guiney and his grandchildren celebrate Jacobs Tashadelek winning Heat 7 of the second round of the Matchbook Betting Exchange Irish St. Leger

DOON native Pat Buckley stole in the show in Limerick on Saturday night as he sent out a brilliant treble in round two of the €30,000 Matchbook Betting Exchange Irish St. Leger.

The first of the Buckley greyhounds to cross-over in front was Glengar Bale and he comfortably made it back-to-back wins with a routine success in heat three. The son of Barcia Bale and Droopys Smasher set a frantic gallop thereafter as he drew clear of Ballymac Art down the back straight before staying on strongly to score by five lengths. Ballymac Art next best in second, the time for the 7/4 favourite was a fast 29.49. The final qualifying position was claimed by Tyrap Luke in third.

Next up for the Cappawhite based trained was his English Derby champion, Deerjet Sydney, in heat five and this was another emphatic performance as the even money favourite dismantled his field to win at a canter.

Owned by Kenny Glen, Deerjet Sydney flashed from trap two and he showed his customary early gears to motor past Sheriff on the run to the opening turn. From here, his rivals were running for the minor placings as the son of Droopys Sydney and Madgies Wish maintained a relentless gallop thereafter to cross the line seven and a half lengths clear of nearest rival, Sheriff, in second. The final qualifying position went to Drahan Jet in third and the time was a slick 29.60.

The treble was up for Pat Buckley in the final heat of the night as Singalong Sally came from off-the-pace to maintain her unbeaten record in this year’s St. Leger.

Heading to traps a 4/6 jolly, the Gilbert Anderson-owned star broke well from two, but it was Minor Droopy who showed the way on the approach to the opening turn. With little to separate the duo entering the back straight, Singalong Sally showed brilliant pace to loom alongside Minor Droopy and the daughter of Tullymurry Act and Droopys Smasher stormed to the front midway down the back. It was a closely run affair thereafter, but Singalong Sally displayed all her determination to cross the line three parts of a length clear of Minor Droopy in second. The time was 29.82 with Sweep The Yard also making it into the hat for the quarter finals back in third.

Golden-based trainer Graham Holland was also on the scoresheet. Russian Glory landed his opening round assignment in good style for Pat and Justin Muldoon and after threatening a massive effort, he duly delivered in heat two. The son of Droopys Sydney and Glory Kitty open a healthy lead down the back and he from here, the 4/1 shot stayed on well to cross the line five lengths clear of Scooby Princess, who recovered well after a poor start, in second. The final qualifying position went to Priceless Jet in third as the clock returned a fastest of the second round, 29.43.

Star of the opening round, Part Blake was another to score for trainer Graham Holland. Owned by Una Creed and Mary O'Connor, Part Blake broke well and even tho he took a bump at the opening corner, he was still in full control soon after. From here, the 5/2 shot upped the ante further as he powered right to the winning line where he had over five lengths in hand over the fast-finishing pair of Bling Bling Paul and Gunboat Showman. The time, given the early skirmishing, was a fast 29.62.

Kerry trainer Liam Dowling was another to record a double. First up, in heat one, was the hugely consistent Ballymac Wild. You run out of superlatives for this greyhound, and he scored a brilliant 21st career win last night with another impressive display.

Pulling away in the closing stages to win by a length a half from the strong-running Allforthebest in second. The final qualifying position was claimed by Ballyard Taylor, who was four lengths further back in third, and the time was a slick 29.47.

The double was completed by Liam Dowling in heat six as Ballymac Merlin (Vulturi - Ballymac Belle) delivered on obvious potential with a polished display at handsome odds of 7/2.

Showing some of that excellent back straight pace on display last week, Ballymac Merlin maintained a super gallop throughout, and he was three lengths too strong for Boylesportsbingo at the winning line. The time was a hot 29.52 as Loher Ron took the final qualifying position back in third. Scarty Yank, after making big progress into the third turn, met traffic at this point and as a result made an exit from the feature.

In heat seven, Jacob Tashadelek bounced back from a shock opening round defeat to get back on track for Cork owner Con Guiney.

Heading to traps the 6/4 favourite, Jacob Tashadelek overcame a horrid start last time out to secure qualification, but he was much faster into stride last night as he came away well from trap four. Showing fine speed up front, the son of Droopys Sydney and Nina Tashadelek stayed on well to cross the line two lengths clear of the recovering Gortkelly Nestor in second, while Fast Fit Paddy claimed the final qualifying position in third. The time was 29.75.