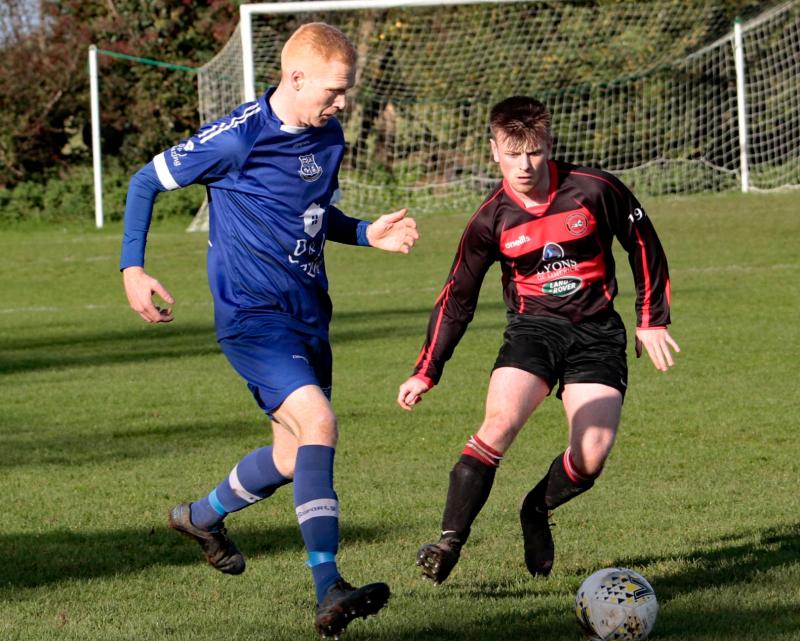 Charleville 3 Prospect Priory 4 (aet)
As expected, Charleville put up a real challenge when they hosted Prospect Priory in the FAI Junior Cup on Saturday evening but came up just short as the Premier side recorded a memorable 4-3 win in extra time.

Wayne Colbert’s side took the lead after ten minutes Tyrique Leamy raced onto a through ball to drill the ball low into the corner.

The same player doubled the visitors advanatge when he cheekily chipped over Charleville keeper David O’Riordan.
Just before the break, Charleville were back in the tie when Gary Ward finished well.

On the resumption the home side were on top chasing the equaliser.

They got their reward late in the game when substitute Darren Casey scored to send the game to extra time.
Still on the front foot, Charleville took the lead in extra time with Casey’s second of the night.

In the second period, Prospect got back on track and levelled the tie five minutes from the end when a fierce drive by Dylan Kelly Higgins struck the crossbar and bounced out for Josh O’Rahilly to finish.

With a penalty shootout looming, Prospect were warded a free kick 25 yards out and Kelly Higgins stepped up fired straight into top corner a goal worthy of winning any match.

Star Rvs recorded a truly memorable victory on Sunday morning when, in dramatic fashion, beat Caherconlish to enter the hat for the open stages of the FAI Junior Cup.

I’m not sure how many years it’s been since Star were 'out of town' but they were a regular fixtures in the latter stages of the competition in years past and it is great to see the famous club again on an upward trajectory.

Caherconlish proved a tough opponent who fought back twice before being undone by a last minute strike by Brian Purcell.
Star took the lead after five minutes when Jason Daly chased down a long ball and was rewarded when he was upended in the area and awarded a penalty kick. The striker dusted himself down and converted to put Star ahead.

In the second half a foul on Jordan Boland was punished again, this time the Daly hit his 20th goal of the season, firing a free kick over the wall into the roof of the net but the visitors were no bowed and they equalised again courtesy of Mark Ryan.
With extra time looming, Daly turned provider, hitting a long pass to Brian Purcell who hit an absolute peach, worthy of winning any game, to let the Star celebrations begin.

Regional faced off a potential banana skin on their visit to Pallasgreen to record a comfortable 5-1 win to progress in the FAI Junior Cup.

The home side lined up to contain the free scoring Premier side but it did not pan out as they hoped as Sean Madigan put Regional ahead after ten minutes.

Pallas were back on level terms midway through the half after a superb goal from Rob O’Donnell.

Regional Utd regained the lead on the stroke of half time when Graham Burke was on the mark with a glancing header.
Any hopes of a Pallas rebound after the break were dashed within two minutes when Willie Griffin raced clear to score.
Griffin scored his second and Regional’s fourth when he fired home from the edge of the box.

The winners kept the best to last when Ewan O’Brien scored a cracking free kick with ten minutes remaining.

Ballynanty Rvs turned in a solid performance to advance in the FAI Junior Cup with a 3-0 win at Mungret Regional on Sunday.
The home side battled hard for every ball and made life difficult for Balla, without creating any real clear cut chances.

At the half time break there was just a goal between the sides courtesy of Adrian Power who ghosted in from the right to put the finishing touch to Thomas Byrnes lay off.

Mungret continued to battle after the break but Balla had the upper hand thanks in large part to wide man Eddie Byrnes who was causing havoc on the right.

Midway through the second half Balla got the crucial second when John Connery played an inviting ball across the face of goal and Eddie Byrnes arrived on cue at the back post to get the touch required to finish to the net.

It was 3-0 fifteen minutes later when Eddie Radcliffe’s cross took a wicked defelction past keeper McElligot to complete the scoring.

Pike Rvs advanced into the next round of the FAI Junior Cup with an easier than expected win over Croom Utd at the Pike Field on Sunday.

Once Colin Daly opened the scoring early on, it was contest over.
The remainder of the opening half was the Ger Barry show as the Pike man went on to complete a hat trick before the break.
After the restart Colm Walsh O'Loughlin and Conor Layng tacked on further scores to bring the tie to a close.

Fairview Rgs join Aisling and Pike Rvs on 21 points atop the Premier League following a 5-1 win at Geraldines on Sunday.
Martin Deady out Fairview in front but a penalty kick from Bobby Tier saw the tie level on 16 minutes.

Dines were hardly finishing celebrating when they conceded an own goal, typifying their luck to date this season.
Further goals from Deady, Mike O'Gorman and James Fitzgerald completed the scoring before half time.

Fairview Rgs qualified for the semi finals of the Tuohy Cup with a hard-earned win over a plucky Janesboro XI on Thursday evening.

The newly crowned Presidents Cup champions looked to be on their way when the in-form Conor Coughlan scored a cracking goal to break the deadlock midway through the half.

Minutes later, a challenge on Ross Mann presented Steven Bradley with a spot kick, which he coolly dispatched to net to make it 2-0.

To their credit Janesboro kept plugging away and their pace was causing ‘View a number of problems.

Early in the second half Donie Curtin reduced the arrears to set up an exciting finale, but  Mark Slattery put paid to that challenge with a superb goal to seal the win and set up a semi-final bout with the winners of next Wednesday’s quarter final between Pike Rvs and Kilmallock.

In the Premier A League, leaders Fairview Rgs B recorded a thrilling 5-4 win over Moyross. Scott Kirwin, Josh Shinners, Ben O'Shaughnessy, AJ Moloney and Conor Keane netted for Fairview, Habideen Gbadebo, James Cleary and a double from Colm O'Mahoney made up the Moyross tally.

There was a big surprise with Carew Park going down 4-2 to a bang in form Corbally XI. Alan Rusitsko and Shane Cox scored two apiece for the winners. Adam Frahill and Gary Griffin replied for Carew.

In Division 1A  Knockainey and Hyde Rgs played out a scoreless draw while Shelbourne went down to Ballylanders whose scorers were  Shane O'Donoghue, Rob McLoughlin, Declan Connors (2) and Danny Frewen.

Aisling beat Athlunkard Villa 3-1  in Division 1B. Ger Clancy (2) and Joey Lavin scored for the winners.

Shane Lyons and Dylan O'Brien were on the mark for Kilmallock B in a 2-1 win over Hyde Rgs for whom Darren Shine scored.
Meanus proved too strong for Murroe running in scores from Brian Sexton, Anthony Neylon, Aidan Meade, Conor Burke, Billy Hogan and David Cregan.

In Division 2B Aisling Annacotty D beat Lisnagry 3-2 having been 2-0 down, thanks to scores from Brian Butler 2 and Jason Lipper.

The top game in Division 3A ended all square between Pike Rvs B and Herbertstown. Damien Carmello and Oisin O'Grady were the respective scorers.

Barry Danaher and Danny Galvin scored two apiece for Mungret in a 4-1 win over Granville Rgs B while Newtown Rovers and Brazuca United also finished tied.