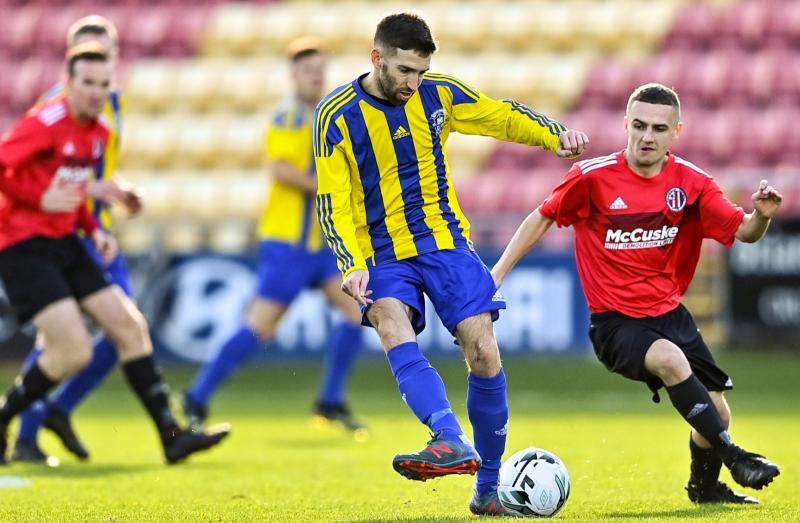 Jeffrey Judge, of Fairview Rangers, in action against Connor McCullough, of Willowbank, during the President's junior cup final at Tallaght Stadium last weekend

THE FAI Junior Cup takes centre stage this weekend after which we will know five of the LDL’s six representatives in the open stages of the famous competition.

There are several appealing ties with the pick of the bunch being the all-Premier clash of Mungret Reg and Ballynanty Rovers.
Mungret Reg were bitterly disappointed to exit the Munster Junior Cup last weekend at the hands of Carew Park and will be keen to give a better account of themselves.

Ballynanty Rvs come into the tie on the back of a win over Regional Utd last Sunday. Despite the result, Balla were not at their best although a more positive note for Balla was the return to action of Jason Hughes and prolific goal scorer Conor Ellis.

If the Blues are any way off the space on Sunday, they could pay the price against a Mungret side that are more than capable, despite recent results.

Premier A side Charleville have home advantage against Premier side Prospect on Saturday evening. The Cork side are in fine form and well capable of claiming a Premier scalp. Shane Dillon, after a brief period away from the side, has returned to his prolific best and will relish a chance to shine.

Prospect have also been in good form. Wayne Colbert has his side well organised and difficult to beat. They will know they face a tough one and will be prepared for the battle.

Pallasgreen are another team well capable of causing an upset. Despite plying their trade in Division 1B, they have some very good players and a striker in Vinny Ryan who is a real threat.

They host Premier side Regional Utd who come into the fray on the back of a disappointing defeat to Balla last weekend.
They had enough chances to win the game but squandered the chances. No doubt they will work on that during the week and should be well up for the challenge.

Star Rvs will be hoping that the great excitement created when they beat Athlunkard in the previous round can be built on when they host Caherconlish in Lee Estate. It is great to see the enthusiasm at Star and it evokes memories of some glory days in Lee Estate.

They meet a Caherconlish side, mid-table in Division 2A, but well capable of playing at a higher level.
Star enter the fray as slight favourites but need to expect a 50/50 challenge if they hope to prevail.

Pike Rovers are in fine form and will be expected to see off the challenge of Croom Utd. The Hoops have begun to click at the right time. However, they will be aware that Croom already took a Premier scalp this season, when they beat Geraldines in the Munster Junior Cup and they will take nothing for granted.

In the Premier League Fairview can go joint top if they can beat neighbours Geraldines. Fresh from celebrating their Presidents Cup victory last weekend, Fairview Rgs will come into the tie full of confidence.

Geraldines are working their way through a rough period and the last thing they need is a buoyant Fairview arriving.

Coonagh Utd are still hoping to make the top six when the League is split and three points versus bottom side Kilmallock is a must in that pursuit.

Kilmallock are rooted at the foot of the table but have shown they can pull a result out of the hat so must be treated with respect.

The top game in the Premier A League is Fairview Rgs B v Moyross. Fairview lead the way but have Carew and Charleville snapping at their heels. Moyross slipped up recently and cannot afford another loss to keep their promotion push on track.
Carew Park are on a roll of late and they are expected to continue on their winning ways when they meet Corbally Utd.

Hyde Rgs can go top if they win at a much-improved Knockainey side in Division 1A and in Division 3A Pike Rvs B take on closest rivals Herbertstown.

The Tuohy Cup continues on Thursday when Fairview Rgs take on Janesboro in Jackman Park at 7.00pm.