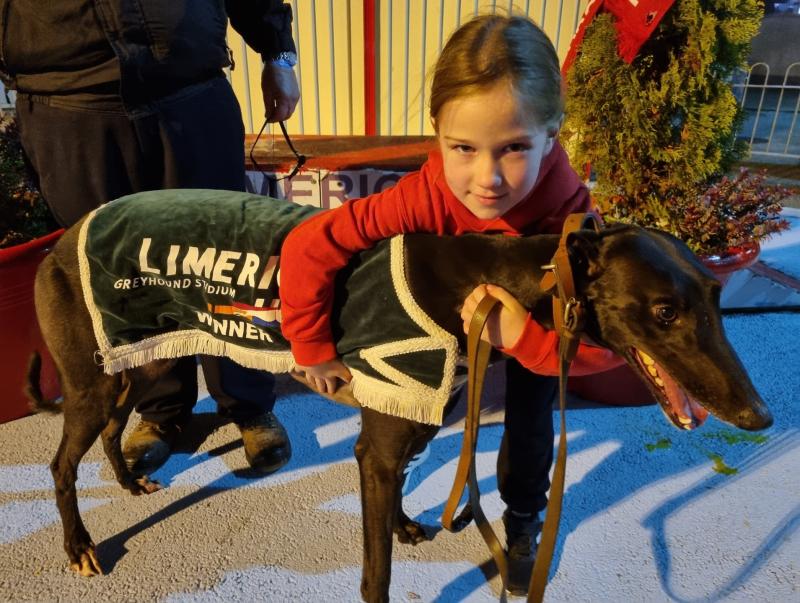 A hug for Ballyelan Rolly from his number 1 fan Kacie, grandaughter of Donie and Kathy Scanlon

SIXTEEN round one heats in the Matchbook Betting Exchange Irish St Leger dominated the local greyhound racing schedule this past week.

The action continues this Saturday night in Limerick with the second round heats of the Matchbook Betting Exchange Irish St Leger.

The opening six heats of the Matchbook Betting Exchange Irish St. Leger got underway on Thursday night at Limerick Greyhound Stadium and it proved a night dominated by trainer Pat Buckley as he accounted for half of the heat winners with Scarty Yank setting the standard in heat one.

Of the six heats down for decision, there was a common theme in that each of the heat winners made virtually every yard of the running and it didn’t take long for the competition to catch fire as Scarty Yank stormed to a mighty impressive victory in the opening heat of the night. A real eye-catcher during the Con & Annie Kirby Memorial at Limerick back in the spring, Scarty Yank had a six month absence from racing prior to his comeback run last weekend and although meeting traffic, the race certainly served its purpose as he dismantled his opening round heat in superb style.

The double was completed for Pat Buckley in heat three as Glengar Bale returned to winning ways with a comfortable victory.
A 7/2 chance at the off, Glengar Bale had been mixing it between six and four bends recently but he produced a performance reminiscent of old last night as he made every inch of the running to win well.

The treble was secured in the final heat of the night as Singalong Sally (Tullymurry Act - Droopys Smasher) once again made her trap one berth pay dividends for connections.

A brilliant runner-up in this year’s BoyleSports Irish Greyhound Derby, Singalong Sally had four wins from eight starts when donning the red jacket prior to last night and as such, she was installed the 6/4 favourite to add to her tally. However, she was made to work hard for the victory as kennel companion, Deerjet Sydney, forced the bitch to pull out all the stops in the closing stages.

Ballymac Wild lit up last year’s Irish St. Leger and he got off to the perfect start in heat four in his bid to go one better this time around.  Looking for an amazing 20th career win, all in Open class, Ballymac Wild was understandably installed a red-hot 4/6 favourite to land the spoils and he certainly didn’t disappoint as Liam Dowling’s warrior powered to victory.

The first major shock of this year’s Leger came in heat five as one of market front-runners, Deadly Destroyer, crashed out of the competition as Gunboat Showman made all to claim a 9/2 shock.  Deadly Destroyer may have made an early exit in heat five but prior to that, Garry Hannon and Karol Ramsbottom did get on the scoresheet in heat two as Deadly Cavani got back to winning ways on his first start at Limerick.

The remaining ten first round heats of the Matchbook Betting Exchange Irish St. Leger took centre stage at Limerick Greyhound Stadium on Saturday night and there was no doubt surrounding the headline maker as Part Blake lowered the colours of outright favourite Explosive Boy in heat ten.

A greyhound who won on debut in 28.76, Part Blake has a series of eye-catching clocks already to his name but heat ten was expected to be dominated by the outright market leader, Explosive Boy, and very few would have predicted any sort of an upset. However, there was to be a major shock on the cards as the Graham Holland-trained Part Blake, a massive 12/1 shot, flew from trap one to leave his rivals for dust in the opening yards.

Favourite backers finally had something to shout about in heat eleven as Scooby Princess landed the spoils for Steve Noble and Jennifer O’Donnell.  Dubbed as a two-dog contest between Scooby Princess and Priceless Jet prior to the off, it was the duo who crossed the line with just a length to separate them.

Only the second greyhound to justify his favourites tag on the night, last week’s Laurels champion One Time Only scored in trap-to-line fashion for Thomas O’Donovan in heat thirteen. On his first venture to Limerick, One Time Only was quickly into stride from trap four and Paul Horig and John Woodford’s star showed that brilliant early dash which saw him claim Classic success just seven days prior. Setting a strong gallop down the back, the son of Droopys Sydney and Mags Image, the 6/4 favourite, stuck to his task well and although Storys Peewee showed some eye-catching gears to make rapid inroads, the line came just in time for One Time Only as he secured a one length victory.

Kathy Scanlon is getting some tune out of Ballyelan Rolly at present and the September 18’ whelp produced a strong finish to reel in long-time leader Barjoe Lad. The latter had flown from trap five and was setting a fine gallop but both Ballyelan Rolly and Kilbannon Psycho challenged at the penultimate bend and a close finish was to follow. All three greyhounds crossing the line in a blanket, 5/1 shot Ballyelan Rolly (Laughil Blake - Ballyelan Comet) stormed around the outside to score by a neck with Kilbannon Psycho next best, and Barjoe Lad a further short-head back in third. The time was 29.84.