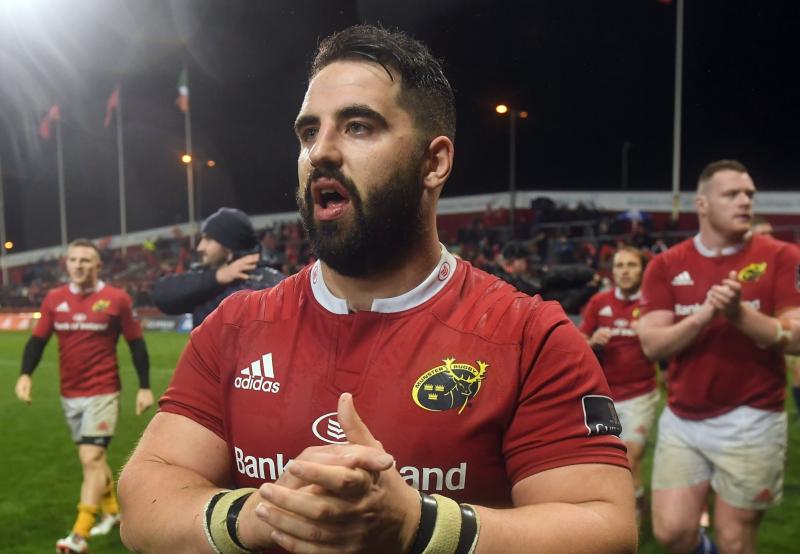 Prop Peter McCabe, who has announced his decision to retire from playing, pictured after Munster's 2016 meeting with the Maori All-Blacks at Thomond Park

A FORMER Munster Rugby prop has announced his retirement from playing aged 29.

Peter McCabe made five appearances for the Munster senior side during his time with the province, including featuring in the November 2016 victory over the Maori All-Blacks at Thomond Park.

The loosehead impressed on a number of occassions for Munster 'A' after making his B&I Cup debut in the 2015 quarter-final against Doncaster Knights.

He began a one-year Development contract in June 2015 and subsequently signed a contract extension for the 2016/17 season.

A pectoral tear saw the prop miss much of the 2015/16 competitive season but following his return, he impressed in both club action for Dolphin and for Munster A in the final two rounds of the British and Irish Cup.

McCabe made his PRO12 debut in November 2016 against Ospreys in Musgrave Park and a week later featured in that game against the Maori All Blacks in Thomond Park.

After playing against Doncaster in the rescheduled B&I Cup game in early January, he joined Connacht Rugby on a loan basis the following week.

McCabe went on to spend two consecutive spells at Connacht Rugby, earned 37 caps for the province in total, including two starts in the Champions Cup. The Cork man then joined the Bristol Bears in the English Premiership initially on a short-term deals at the conclusion of the 2019/20 campaign and then signing a contract extension for last term.

Announcing his decision to retire from playing, McCabe wrote on social media:

"After lots of thought I have made the tough decision to retire from professional rugby.

"What an amazing journey I have had with some truly great people and lifelong friends. I'm very lucky to have been able to represent my home province of Munster, Connacht and Bristol Bears. Three superb clubs with wonderful fans and I wish them all the best going forward.

"I always gave 100% when I put the jersey on for every team I represented in my career. That is something I will carry forward in the next chapter.

"Lastly, to my family and loved ones I would not have had this fantastic rugby journey without your support."