Limerick Junior Soccer: Weekend Round Up 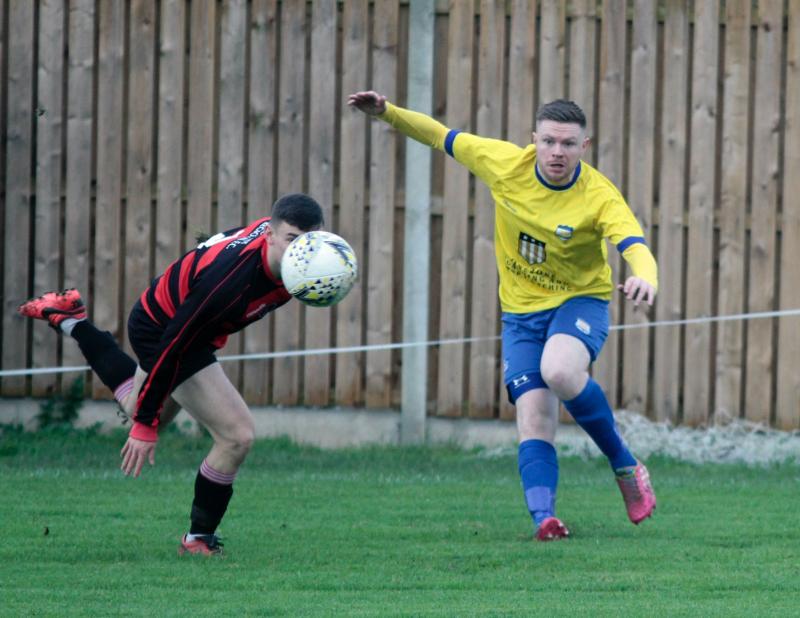 With the weather putting paid to other games in the Premier League, all eyes turned to the clash of Ballynanty Rvs and Regional Utd at LIT.

After 90 minutes, Balla emerged to take the spoils thanks to a second half goal from Aidan Hurley to keep alive their hopes of staying in the hunt for honours.

Going into the tie, both teams knew that defeat with deal a huge blow to any title hopes bit the game, while always entertaining, did not have that ‘cup tie’ feel to it.

Regional had the better of the opportunities but failed to find the target. Balla had few clear cut chances and rarely worked the Regional keeper but took their opportunity when it arose.

Balla started with Dermot Fitzgerald at the heart of defence and his experience played a big part in the victory.

On another bright note for the Blues, Jason Hughes and Conor Ellis made welcome returns to action which bodes well for some important upcoming games.

Regional had the best player in the park in Edward McCarthy, who dictated matters throughout but could not find a way through a stubborn defence.

Kieran O’Connell gave early warning of the threat he poses with a header that flew inches over the top.

Minutes later, Balla keeper Stephen McNamara used his feet to keep out a Jack Arra shot and then saved from Ewan O’Brien’s  follow up from the rebound.

At the other end Evan O’Connor threw his body in the line of John Connery’s goal bound shot and Seamus Moloney sent a glancing header inches wide of the upright.

McNamara made another couple of good saves to deny O’Connor and O’Brien before the break.

Balla took the lead when Dermot Fitzgerald floated a free kick into the area. Jake Dillon knocked the ball on and Aidan Hurley send a backward header lopping over the keeper and into the net.

Rebounded off the upright.

A downpour and storm force winds saw Balla defending for their life near the end but they did what was required and got their reward.

Carew Park captured their second Premier League scalp on Sunday when they beat Mungret Regional 2-1 in a testy encounter at Mungret.

After beating Nenagh in the FAI, Albert Slattery’s men were well up for the challenge and you feel no team will fancy drying them in coming rounds.

Mungret took the lead following a foul on Kian Barry inside the area. Kieran Long converted the spot kick.

Even concession of the opening goal did not faze Carew and they were back on level terms fired home following a goalmouth scramble.

The tie turned on it’s head before half time when Jonathan Grant;s flick on at the front post was headed in at the back post by Gary Griffin.

The second half was a teak tough cup tie and despite being reduced to ten men, Carew held on for a memorable win.

Shane Dillon was the hero for Charleville with a hat trick to his credit. Sean McCormack and Luke Doyle made up the winners tally.

Darren Naughton scored for Athlunkard Villa in a 101 draw at Aisling B.

Joe Lonergan (2), Joey Shanahan and Eric Conroy scored for the winners while Brian O'Sullivan and Jay Ryan replied for Newport.

With leaders Granville Rgs’ game falling to the conditions, Hyde Rgs closed the gap to just two points following a 2-1 win at Ballylanders. Hyde goals came from the Kennedy brothers, Ben and Luke.

Bob Harty was on the mark for Patrickswell but they fell 2-1 to Kilfrush with scores from Arron Carmody and Kevin Meade.

In Division 1B, Caherdavin failed to take full advanatge of a game in hand on leaders Regional Utd when they could only manage a 2-2 draw with Aisling Annacotty C. Danny McDonagh and Kane Connolly netted for Celtic.

Pallagreen recorded their fourth successive win to move into third spot. Kevin and Vinny Ryan scored in a 2-0 win over Mungret Reg.

On game in Division 2A ended all square with Caherconlish and Hyde Rgs B sharing four goals.

Mungret Reg D picked up their first win of the season in Division 3A beating Newtown Rvs 3-2. thanks to scores from Jonathan Croucher, Danny Galvin and Barry Danaher

In the FAI Youth Cup Aisling Annacotty A beat Pike Rvs 2-1 thanks to scores from Riskoff and Curran while in the Under 17 FAI Cup Fairview Rgs edged out Mungret Reg after extra time.  Matt thew T’Pou Emmet Hehir and Jamie Hannon scored for the winners in a 3-2 game.

Shelbourne B (off) Nenagh B

Coonagh Utd B (off) Lisnagry B

Herbertstown B (off) Parkville B

Cappamore (off) Newport A

Under 17 Div One League