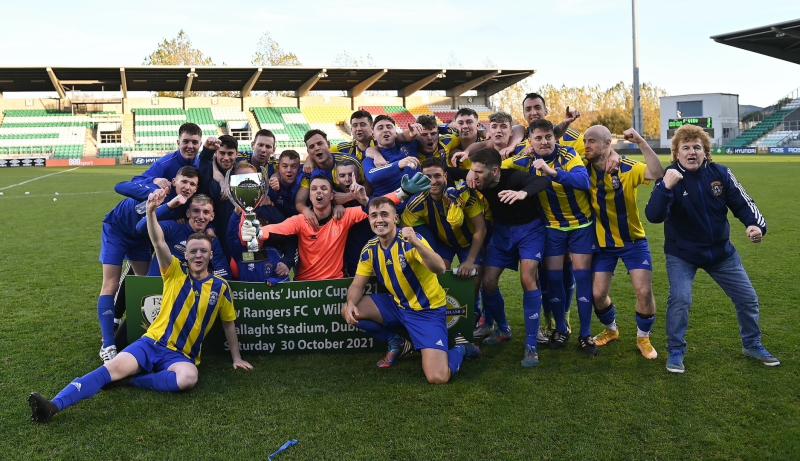 Fairview Rgs wrote their names on another page of Limerick Junior soccer history, when they became the first local team to be crowned “All-Ireland Champions” after they won the President’s Cup at a sun soaked Tallaght Stadium on Saturday afternoon.

Willowbank of Belfast were the opponents and provided a stern test in a highly entertaining affair.

The competition, still in it’s infancy, pits the FAI Junior Cup winners versus their counterparts in Northern Ireland and has only been competed for on three occasions. Fairview’s win on Saturday ensured the trophy has yet to leave the Republic of Ireland.

Fairview’s joy at the final whistle was unrestrained and deservedly so as the Blues had to fight back from being 2-0 down at the break.

Shane Duggan’s quick-fire goal after the restart set the stage for a comeback but the Limerick side had to wait until injury time before Ross Mann struck the vital goal.

Fairview’s experience at penalty shoot outs over the last couple of season’s stood to them as they emerged 3-2 winners, thanks to Aaron Savage’s amazing performance, saving three of five spot kicks.

Fairview started on the front foot, with Shane Duggan commanding proceedings in the middle and could have taken a lead but Russell Quirke’s final ball to Mike O’Gorman narrowly missed its target.

The Belfast side began to find their feet and dominate with Conor McCullough shooting wide when well placed. McCullough was to the fore just after the half hour, when an excellent passing move saw Richard McEvoy bend just beyond the reaches of the diving Aaron Savage to open the scoring.

Fairview were rattled and Willowbank sensed blood, pouring forward and following a succession of corners, they doubled their lead within two minutes. A looping corner wasn't dealt with and Pearse Devine unleashed a volley from the edge of the box that found the far top corner.

To their credit, Fairview settled, but found chances in short supply and went in at the break two down.

No doubt, spurred on by a Jason Purcell team talk, Fairview emerged like a new team in the second half, and within four minutes, the deficit was halved.

AJ O’Connor, rock solid at centre back, stepped forward with the ball and hit a cross field ball to Fitzgerald who in turn found Shane Duggan in the box. Duggan feinted to shoot, when most would have panicked, and he rifled into the roof of the net.

What followed was a game of attackers and defenders to the end of the game, but both keepers were proving stubborn.

The final 15 minutes of the game swung from end to end with Willowbank squandering a glorious chance to double their advantage when McCabe fired at Savage when clear through, while AJ Moloney squandered an equally good chance 30 seconds later.

Indeed, Moloney’s introduction as part of a triple substitution with David Hannon and Scott Kirwan changed the game towards the FAI champions.

With 7 minutes remaining, Kirwan was involved twice, first finding Duggan, who was foiled by a great covering tackle, and secondly finding Hannon who volleyed wide when well placed. Duggan’s influence was growing by the minute and he was unlucky not to equalise when he dragged wide late on.

Just when it appeared the game was up for Fairview, their never say die attitude came to the fore again when a long ball into the box broke to Ross Mann who diverted it into the net. It wasn't the prettiest goal but not one of the sizable Limerick crowd cared; 2-2!

Fairview nearly nicked it before the end when Duggan’s volley from 30 yards flew past the post, but it was the last chance and with the rules stipulating that there would no extra time, it went straight to penalties.

As thrilling as the game was, the penalties proved a great foil, with man of the match Hughes giving the NIFA champions the lead and Jeffrey Judge being denied by Diamond.

Aaron Savage, as we’ve come to expect, saved the second penalty and when Shane Duggan converted, it was all square.

Savage saved again and Martin Deedy converted giving Fairview the lead after 3. The topsy-turvy nature of the shootout continued when Willowbank scored and AJ O’Connor’s effort was saved. All square at 2-2 after 4 each with both keepers offered the change to be the hero. It turned out to be Savage who took the chance, saving an incredible 3rd penalty and so it fell to Steven Bradley to win it, and he calmly slotted to the top corner to joyous scenes.