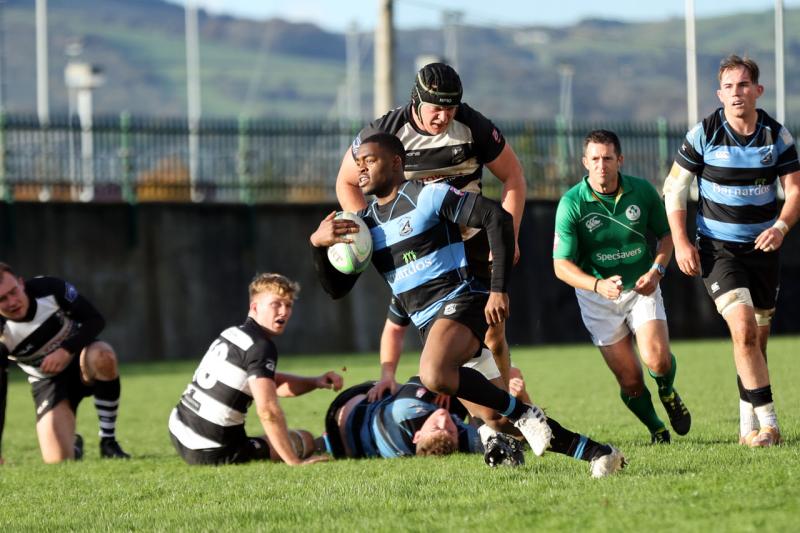 Table toppers in Division 1A Garryowen made it four wins from four with a 27-21 win on the road in Ballynahinch. The visitors held off a second half comeback having led 27-0 at the break. (Teams and try scorers below)

Second placed Young Munster, themselves now four from four, had an away win also. The 'Cookies' won a tight battle against Lansdowne, 24-20, on the main pitch at the Aviva Stadium. (Teams and try scorers below)

In division 1B, Shannon had a big home win, 32-10 over Old Belvedere at Thomond Park. (Full report below)

In Division 2A, UL Bohemians lost out to Nenagh on Friday night, while Old Crescent's game against Buccaneers was late starting. The midlands side's coach was delayed by traffic on the motorway following a crash. The visitors did not let that get in their way of a win however, sealing the win by 34 points to 20. The defeat leaves Old Crescent of the Division after four games.

In Division 2C, Bruff, were Limerick's 6th side in action today against Midleton. The Cork side, who were at home, won the tie 28-15. The defeat for the men from County Limerick also sees them rooted to the bottom of the table in 2C.

More to follow on these results as the evening proceeds.

Shannon RFC secured a bonus point win against Old Belvedere on Saturday afternoon to bounce back from their narrow defeat at the heads of City of Armagh last weekend.

It finished 32-10 in favour of Shannon in this Energia AIL Division 1B tie on the back pitch in Thomond Park.

A game that was won in the opening 40 minutes, the Parishmen led 22-5 at the half time break.

Shannon started the stronger of the two sides, but it was the visitors who had the game's opening try after seven minutes of play.

Interpecting Shannon as they attacked into the Old Belvedere half, James McKeown ran from deep inside his own half to touch down in the corner - the first time the Dublin side had possession in the hosts' half.

However, a Jake Flannery penalty narrowed the deficit to two points on the 10-minute mark.

Two minutes later, a superb Ian Leonard kick into the corner saw Shannon gain massive ground. Shannon won the resulting lineout before Flannery went over for a try under the posts.

Fifteen minutes from half time, both Shannon and Flannery had their second try of the game.

After an impressive steal from captain Sean Mccarthy, the hosts took the ball into the middle beforr the in-form Shannon out-half  broke from outside the 22-metre line to touch down. Flannery kicked over the resulting conversion to make it 17-5.

An unconverted Killian Dineen try in the corner, during what was the last play before half time, made it Shannon 22-5 Old Belvedere at the break.

A minute after the restart, Old Belvedere captain Dean Moore scored his side's second try to make it 22-10.

Flannery added another penalty seven minutes from time to keep the scoreboard ticking over against a much-improved Old Belvedere side.

In the last play of the game, Ikem Ugwueru received a quick pass from Aran Hehir before going in under the posts to secure a bonus point and Shannon's second victory of the season.

Flannery converted to ensure a well-deserved 22-point win for the men in black and blue.