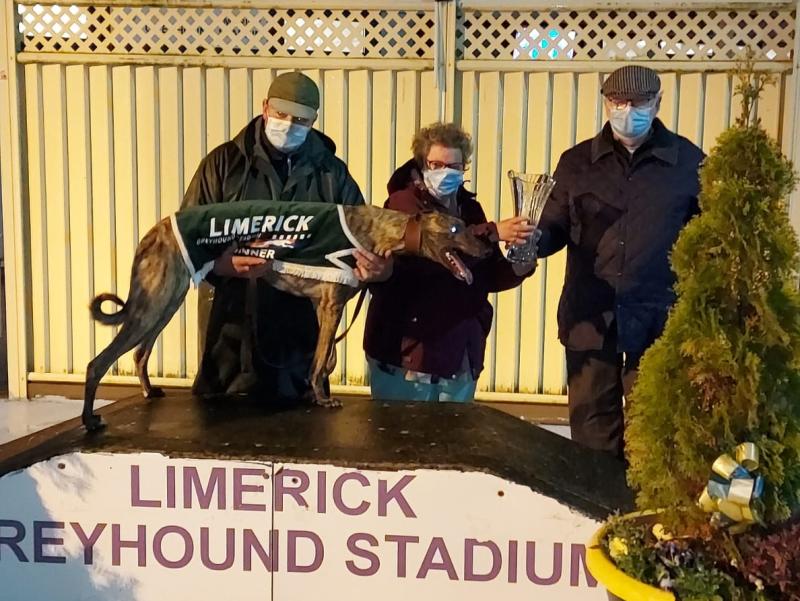 THE final of the €1,100 to the winner Greyhounds Make Great Pets A3 575 was the highlight on Saturday night’s Limerick card and it was Vigorous Jim who dominated the decider from the outset to give local handler Ronny Wuyts a deserved success.

Vigorous Jim had impressed throughout the competition and was the fastest semi-final winner as he posted a sharp 31.48.

However, heading into last night’s decider he shared the market lead at 5/2 with Leamaneigh Scout but it was all over at trap rise as the talented September 19’ whelp boxed clever to make all.

Looking well-housed in trap two, Vigorous Jim wasn’t hanging around as he broke level with Cloondarone Lady in five before displaying immediate acceleration to leave his rivals for dust in the opening exchanges.

Already in possession of a four-length lead heading into the back straight, the son of Droopys Jet and Vigorous Hilary was well on his way to recording what would be a third career victory.

Extending his lead to eight lengths down the back over the chasing pack, Ballintuber Cain did come out of the pack in the closing stages as he produced his customary huge fast finish, however, it was all in vain as Vigorous Jim powered across the line to seal a comfortable six length victory in 31.50.