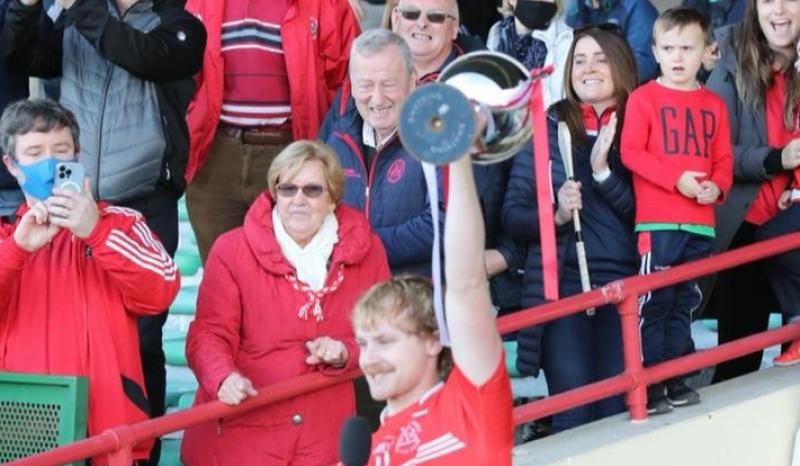 MUNGRET are back in the Limerick senior hurling ranks for the first time since 1990.

In the Lyons of Limerick County Premier IHC final in the TUS Gaelic Grounds this Sunday it finished Mungret 4-17 to 1-12.

Mungret were beaten in this final by Kildimo-Pallaskenry last season but made no mistakes this time round.

It was a 2-12 to 1-5 lead for Mungret at half time who had the aid of the breeze. Cappamore did respond in the second half but didn't score from play in this period and fell short of putting Mungret under serious pressure.

The opening quarter built their foundation for success - leading 1-6 to 0-1 after 16-minutes.

Sean Whelan had the only Cappamore score of the opening quarter in the third minute when it was 0-2 to 0-1.

Then came five successive scores for Mungret up to the water break.

The key score came in the eighth minute when Brian O'Meara goaled for a 1-3 to 0-1 lead.

Full forward trio of Paul O'Brien, Niall Mulcahy and Liam Lynch all had points to ensure the eight point lead at the break.

Cappamore did bring a fresh impetus on the restart and points from Bill Creamer and Joe Lonergan ended 15-minutes without a score for the men from the east.

But Mungret responded in style with a fine goal - Niall Mulcahy sweeping to the net after a fine move for a 2-7 to 0-3 lead and now 10-points clear on 20-minutes.

On 25-minutes Cappamore got the tonic score needed when Ronan Hanly scored a great individual goal.

Cappamore needed to build on the goal before half time but it was Mungret that found four in a row to the interval whistle.

The points from Lynch, O'Brien and Brian Barry had the men in red 10-points clear at the break.

On the change of ends, the lead was out to 12-points with Brian Barry and Brian O'Meara points.

Cappamore hit back with four scores - all Liam O'Donnell points frees and it was 2-14 to 1-9.

Cappamore didn't score from play in this third quarter and then just before the end of this period Niall Mulcahy struck for his second goal.

That left 11-points between the teams entering the final quarter.

In the final minute Brian Barry sealed the win with a fourth goal.