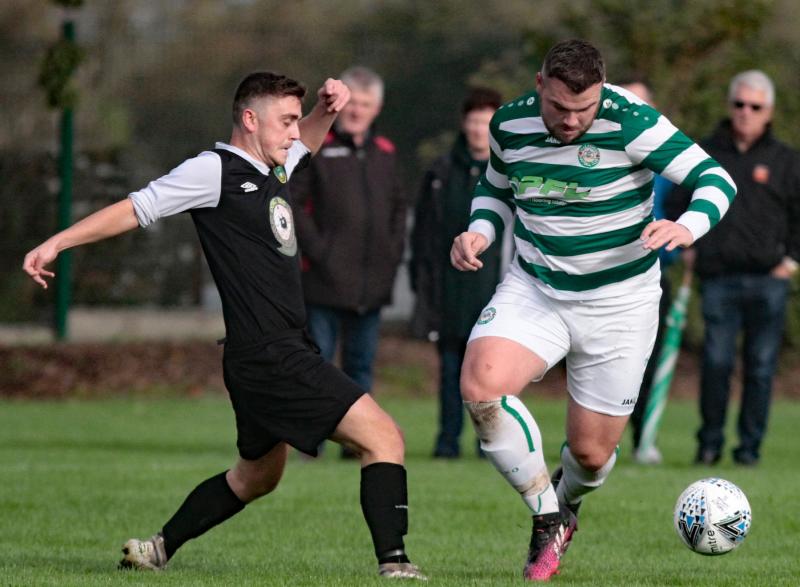 Star Rvs  3 Athlunkard Villa 0
The derby game christened “El Parisho” by Star PRO Fergal Hehir, lived up to it’s billing when the “home” side turned in their best performance of the season to beat close neighbours Athlunkard Villa in the FAI Junior Cup.

While Villa may not have enjoyed proceeding as much, they are gracious enough to  admit that it was Rovers day.

Despite plying their trade a division below Villa, Star started on the front foot and got their reward after 15 minutes when Jason Daly stepped up to a 20 yard free kick and fired under the wall and into the bottom corner.

Star doubled their lead just before half time when a long kick out caused confusion between keeper and defender and Adam McInerney pounced to fire into the net.

With Villa chasing the game in the second period they were always open to being picked off and so it transpired on the hour mark when Brian Purcell took off on a good run down the right before crossing for the excellent Daly to finish his second at the back post.

Even in a superb team outing, Luke Davis and Diarmuid Whelan were prominent.
Star Rvs reward is a home tie versus  Caherconlish for a place in the open stages of the National competition.

Prospect Priory advanced in the FAI Junior Cup with a hard earned win over neighbours Hyde Rgs at Hyde Park on Sunday.

As you’d expect from a local derby, this proved a tough encounter that needed extra time to separate the sides before the Premier side pulled away to set up a tilt with Charleville in the next round.

Yacouba Yabre’s first half goal looked like being the only goal of the game until Richard Benn struck a spectacular effort late on to send the game to extra time.

Extra time brought out the smarts in a number of experienced Prospect players and goals by Tyrique Leamy and Adrian Healy saw them through.

It was disappointment for Hyde but they can take heart from their performance. The Division 1A side matched their neighbours for most of the game.

Central defenders Jonathan Somers and Dylan O’Neill were well on top while in the middle of the park Richard Benn was a real handful.

The absence of top scorer Evan Shine through injury was a major blow for the home side as they lacked that spark up front.
Prospect player-manager Wayne Colbert led by example, mopping up most of what Hyde could throw at the Prospect defence while Eric Carr and Adrian Healy were in the thick of the action throughout.

Prospect opened the scoring when Wayne Colbert’s free kick was flicked on by Dylan Kelly Higgins and Yabre pounced to poke the ball home from close range.

Chances were few and far between, with Ronan Power the busier of the two goalkeepers.

However, with five minutes remaining, Dean Casey’s throw in fell kindly to Benn, in the area and he swiveled first time and buried the ball in the top corner for a super goal.

Extra time saw the intensity that led to Hyde’s equaliser wane somewhat as Prospect got a foothold on the tie. They took the lead in the first period when Healy’s through ball sent Ian Clancy free and he delivered an inch-perfect ball for Tyrique Leamy to tuck the ball home from close range.

With Hyde pressing for another equaliser they paid the price when a quick breakaway saw Healy power a shot low into the bottom corner to seal the win.

A late goal from Sean Dooley from the penalty spot showed Hyde’s fighting spirit but came too late to change the result.

Pike Rvs eased to victory to progress in the FAI Junior Cup with a 5-0 win over Coonagh.

The game was evenly balanced at the break with just a goal between the sides but the visitors upped the tempo on the restart to tack on four further goals.

Aaron Murphy scored the only goal in the opening 45 minutes when he headed home from Paddy O’Malley’s corner kick.
Just after the break Conor Layng ran onto Neville’s long ball and slotted it past Josh Sheehan in the Coonagh goal.

Any hopes the home side harbored evaporated when they conceded an own goal trying to keep Danny O’Neill’s out.

Layng was played in by McGann and  unselfishly squared it to Murphy for his second and  Kevin Barry rounded off the scoring with a poachers goal after good work by O’Neill and Murphy.

As predicted in our weekend previews, Croom Utd produced another giant killing act to to see off high riding Division 1A Southend Utd in the FAI Junior Cup.

Despite the gap in standings, Croom were out of the traps quickly and took a deserved lead through Cian Shinners.
However, Southend gave indication of their ability when James Lyons struck to level the tie before half time.

After the restart Dylan Murphy came to the fore scoring twice to put Croom 3-1 ahead.
James Lyons reduced the deficit with his second of the day but Murphy had the last say, scoring his third to complete his hat trick and seal a memorable win.

The clash of the won Division 1B sides saw Pallasgreen take the honours with a superb performance that sees them tackle Regional Utd at the next hurdle.

Vinnie Ryan was the hero of the hour for Pallas with three goals. Seamus Mulcahy and substitute Kevin Barry were also on the mark while Ben Frost and Barry O'Sullivan netted for Parkville.

A cracking cup tie saw Caherconlish just pip Newtown for a place in round three of the FAI Junior Cup. Caherconlish started the game very brightly and took a deserved two goal lead, with scores of real quality courtesy of Mark Ryan and Gary Murphy.

Newtown responded well and were back on level terms with two goals from Graham Powers, one from a spot kick.

When Iain Foley netted to put Newtown in front it looked like the perfect comeback.

However Caherconlish were not finished and with fifteen minutes remaining  captain Dean Power was introduced and equalised with his first touch.

With the game evenly poised Mark Ryan hit a cracking free kick to the back of the net to give
Caherconlish victory.

Aisling A were given the fright of their lives in the Munster Junior Cup when they were tested right to the final whistle by their B string.

Liam Quinn scored to put the A’s ahead and when Shane Clarke tapped in to make it 2-0 things looked to be going to script.
However, they had not counted on the fighting qualities of the Bees and a brace of goals by Joey Ryan levelled the tie.

There were some nervy moments for the holders before that man, Clarke again, popped up with a 90th minute winner.

As expected Regional Utd had to fight tooth and nail to see off a dogged Fairview B side on Sunday in the Munster Junior Cup.
Jack Arra and Kieran O'Connell scored for the winners. Ben O'Shaughnessy struck a late free kick for Fairview who fell just short.

Nenagh AFC 4 Mungret Reg 1
Nenagh recorded an impressive 4-1 win over over Mungret Reg in the Premier League to solidify their place in the top six.
Matt Spain scored twice with Kieran O'Brien and Kieran Barr also netting for the winners.
Kian Barry replied for a disappointed Mungret XI.