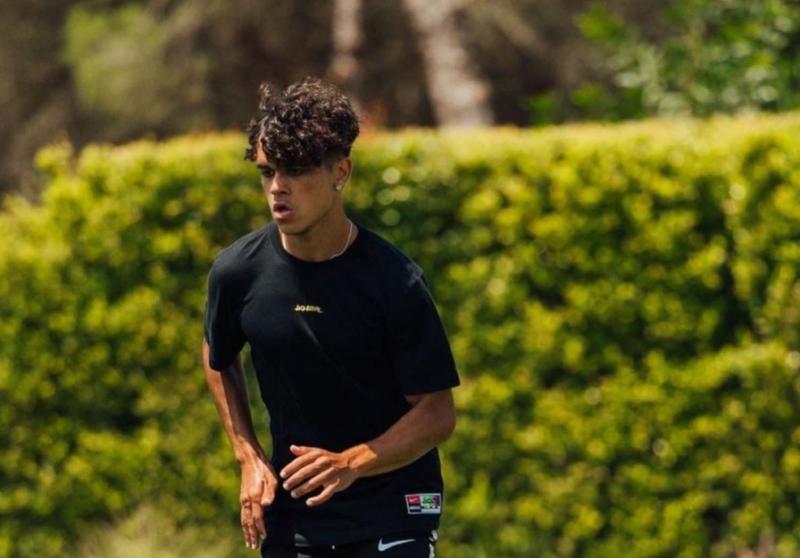 CRISTIANO Fitzgerald is in line to make his Republic of Ireland soccer debut in the coming days.

A full-time professional with Portuguese Primeira Liga side Boavista in the city of Porto, Fitzgerald is part of a 23-strong Irish U19 squad preparing an international friendly double-header against Sweden in Marbella, in the south of Spain.

The eldest son of Michael and Catherine, Jimmy is a native of Effin and attended the local National School and then secondary school in Charleville before gaining his Third Level education in the RTC in Cork, followed by UCC.

"I was once described as the Roy Keane of our hurling team because I would run up and down the field for 60-minutes so I don't think he (Cristiano) got much from me other than the engine to keep going," Jimmy told the Limerick Leader.

"I did have some trials with the Limerick junior hurling team but I wasn't really good enough and then I got the opportunity to go overseas for work when I was in my early 20s and with that I broke my Dad's heart as he wasn't to see his oldest son line out for the parish again," he laughed.

So all of Jimmy's sporting career was in the green and white of Effin GAA club - the pinnacle was the 1992 Limerick County Junior A Hurling final loss to Glenroe.

"I think I was midfield with Robert Fenton and he was a good hurler - played minor and U21 with Limerick," outlined Jimmy.

"Thankfully Effin have had a better team in recent times and especially with the Quaid brothers. I actually hurled with their father Tommy when he came to Effin," he recalled.

"My wife and her family were pretty good at sport and played football so his talent must come from there. He is a very fast and agile player and he certainly doesn't get that from me, so it must be the French side," said the proud dad.

After college in Cork, Jimmy worked with Golden Vale and then went to Dublin where he worked with Anderson and IBM.

In the late 1990s work took Jimmy away from Ireland and to Singapore. He then married a French woman, Joyce, and Cristiano was born in 2003. Across the last 20 years, the Fitzgerald family have travelled the world, (Singapore, Australia, USA) but for the last four years, they have lived in Portugal.

"Living in Portugal is great because it allows us to get back home a lot easier. I even got back for the Limerick All-Ireland hurling final. Thankfully there is now an ex-pats group called Club Limerick Global and they helped with the ticket," he explained.

Jimmy's son Cristiano first linked up with the Republic of Ireland set-up in May when head coach Tom Mohan called up the teenager for a training camp in the UK and the attacker played in a training match against Nottingham Forest U23 side.

This week, the Irish squad are preparing for the UEFA U19 European Qualifiers in Bulgaria next month and Fitzgerald, weeks shy of his 18th birthday, is one of nine players in line for their first Ireland caps when the Boys in Green face Sweden this Friday, and again on Monday, October 11.

Of course, Cristiano could have opted to play for a number countries.

“He has gone to Limerick every summer to play on the farm with his cousins. And my parents are always coming here. But he has spent equal amounts of time with his French family. A dinner conversation in our house is half in French and half in English. I would say very much that Cristiano feels both Irish and French, but he has never lived physically in Ireland or France!”

And, what about his name...

Cristiano was born in November 2003 and three months previous, his name was chosen.

"We knew we were going to have our first baby, knew it was a baby boy and wanted a Latin name. I did not follow soccer at all, but was sitting in front of a TV one Saturday night, drinking a beer, and Cristiano Ronaldo made his debut for Man United, and I fell in love with the name. I’d never heard of him before that. I called my wife and said, ‘What do you think of the name Cristiano?’ She thought it was a fantastic name, so we called him Cristiano," outlined Jimmy, who is currently President and COO at Paddle.