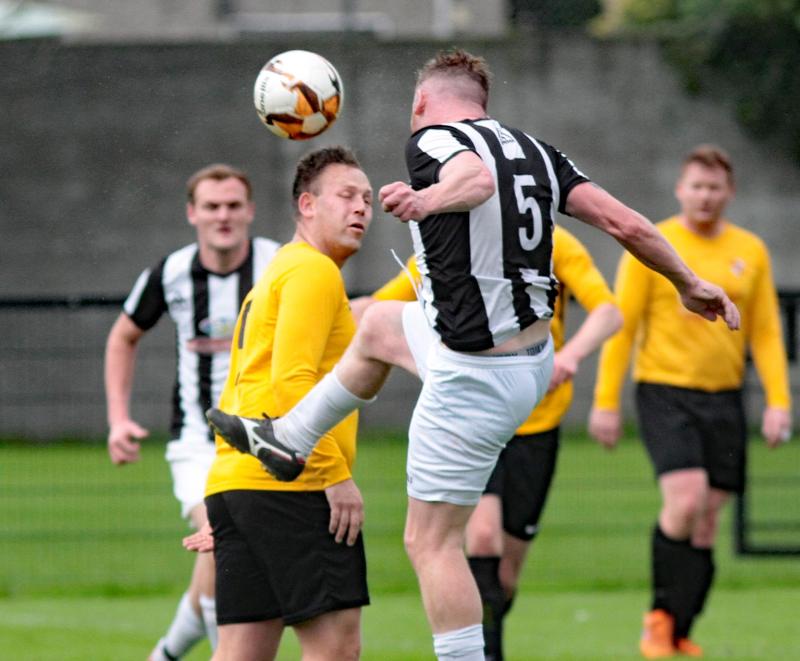 Action from the meeting of Janesboro and Aisling Annacotty in the Munster Junior Cup on Sunday Pic: Brendan Gleeson

IT'S back to League action this weekend with a couple of mouth-watering games on offer in the top flight.

Pike Rovers and Aisling Annacotty played out one of the most entertaining Junior games in years a few weeks back when Pike emerged victorious in a 3-2 FAI Cup win.

If the sides can repeat even half the fare offered last time, then spectators are in for a treat.
With a long list of some of the best players in the region, the standard on display is of the highest caliber.

With two teams on full points to date, this promises to be a thriller. A draw is the obvious prediction.

On Saturday evening Fairview Rgs host Ballynanty Rovers under lights in another tie that offers the prospect of a thriller.
Fairview are just three points behind the leaders while Balla have dropped six points to date.

Neither will be keen to lose any more ground, which should see both teams going for the win.
Regional Utd, just outside the top four should improve their position at home to Kilmallock.

The three remaining ties are evenly poised and could fall either way. Coonagh Utd host Janesboro looking to bounce back after a bad defeat to Shelbourne in the FAI.

Mungret Reg take on Prospect Priory where the winners will open a welcome gap from the drop zone.

Geraldines picked up their first league point in their last outing and will be targeting Sunday’s game at home to Nenagh as a possible three-pointer.

The Premier A is turning into a good battle for promotion. Fairview Rgs B currently lead the way and will be considered favourites to continue their winning streak at home to Hill Celtic.

Athlunkard Villa have a couple of games in hand on the leaders and they play one on Sunday at home to Cappamore.
Corbally are hanging in on the chase but will face a tough challenge against Newport.

In Division 1A, the top two sides meet when Hyde Rgs A host Granville Rgs. Lurking just behind, with a couple of games in hand are Southend, who make the short trip to Summerville Rvs.

It’s first v second also in Division 1B and a local derby to boot as Mungret Reg and Regional Utd B meet in Mungret.

In Division Div 2B a fancied Aisling Annacotty D take on second placed Nenagh B, needing to win to stay in the mix.
There are two FAI games scheduled for youths at the weekend.

On Saturday evening Charleville host Granville Rgs in the FAI Under 17 Cup while Sunday sees Newport A welcome Aisling Annacotty A in the FAI Youth Cup.