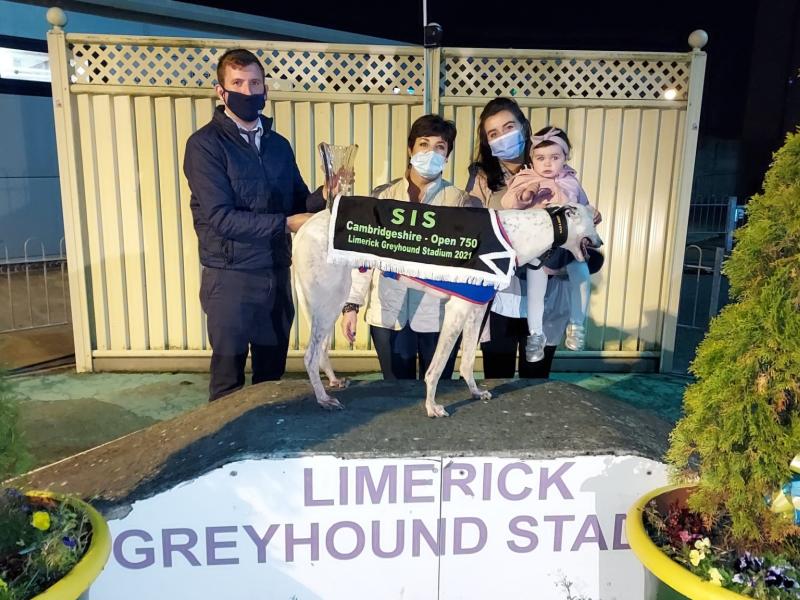 WHILE most eyes were drawn to Shelbourne Park last night for the final of the BoyleSports Irish Greyhound Derby, there would have been plenty of interest in proceedings at Limerick last Saturday night also as the final of the €5,000 to the winner, SIS Cambridgeshire was down for decision.

The SIS Cambridgeshire has produced some top-class action in the past month at Limerick stadium and last night’s decider proved another epic as Jaytee Japan, after playing the bridesmaid on his three previous outings, took charge late on to land the spoils on the night that mattered most.

Newcastle Slaney came in for much support in the lead up to the race and as such, he was installed the 6/4 favourite to take home gold with Jaytee Japan and Dana Point next best as joint 2/1 second favourites.

As expected, Glengar Bale dictated proceedings early on as he pinged the lids from trap five to take a length and a half lead into the opening bend from the perfectly housed Jaytee Japan on the rails.

Meanwhile, Newcastle Slaney, despite making a slow start, was much closer to the pace than in previous outings and the race was coming to the boil nicely.

Entering the home straight for the first time, Glengar Bale has opened a sizable advantage over Jaytee Japan with the lead now extended to five lengths rounding the top bend.

However, the complexion of the race was to change entering the penultimate turn as Jaytee Japan, who was showing outstanding gears, was forced to check when challenging for the lead and Glengar Bale once again took a length advantage turning for home.

Further back, both Newcastle Slaney and Dana Point were flying and both greyhounds looked a huge threat with fifty yards remaining.

Glengar Bale still maintained a slender advantage as the winning line loomed large but he was sitting duck as a trio of greyhounds were breathing down his neck in behind.

Most notably, the well-supported Newcastle Slaney looked a huge threat at this point as he, along with Dana Point, had built up ahead of steam on the outside, while Jaytee Japan had also got back into contention to hold the freedom of the rails on the inside.

This move proved decisive for Jaytee Japan as with a tiring Glengar Bale drifting wide on the run home, this badly hampered both Newcastle Slaney and Dana Point, and it was Jaytee Japan who enjoyed a clear passage to land the prodigious prize for connections.

A brilliant performance from John Turner and Paul Hennessy’s charge, who recovered well from third bend traffic to come home a length clear of the staying-on Dana Point in second.

Away from Limerick, Susie Sapphire made history when adding her name to the Derby Roll of Honour on Saturday in Shelbourne Park.

A winner that became the second youngest ever, the fastest ever winner, the first female winner since 1999 and a winner that ran through the Irish Greyhound Derby competition unbeaten.

Trained by Owen McKenna and with owner/breeder Peter Comerford, Susie Sapphire was already the winner of the Puppy Oaks and Irish Oaks finals.

In victory she became the first bitch to record the Oaks/Derby double, the first greyhound to go unbeaten through the Derby since College Causeway in 2009, the youngest winner since Tina Marina in 1996 and the second youngest winner of all time.